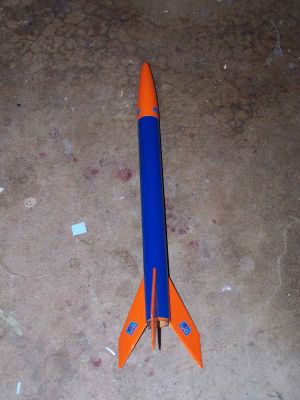 Brief:
I've had My Boid sitting around for a long while but had no real plans on building any time soon. After all, its pretty basic and had nothing to really pique my interest. I changed my mind though during a recent build of another rocket. There I tried using label paper to "seal" the balsa fins. While posting about it on TRF, I got some advice on how to do a better job of it and wanted to give the technique a try. My Boid seemed like the perfect victim for my learning experience.

Construction:
As I understand it, the parts in this kit are highly variable and consist of whatever Semroc has an excess of. This means that the length is variable as is the nosecone and number of fins.

There are apparently several variants to the My Boid. My kit came with three balsa fins but the instructions indicate that there are also versions with 4 fins. The first step of the instructions is to determine which you have and then select the correct fin marking guide. I lined up the body tube one the 3 fin guide and then marked the aft end. An angle was used to extend the lines.

The next step was to insert the engine hook in the precut slit. As I was doing this, the Kevlar® harness had a loop put into one end and slipped around the hook.

Instead of centering rings, this kit has more of a centering tube. It was slid over the engine hook and glued into place.

The nosecone was one of the smoothest and nicest pieces of balsa I have ever received. Instead of using regular filler, I decided to seal it with a layer of thin CA. It was drizzled on and allowed to soak into the wood then set aside to dry. 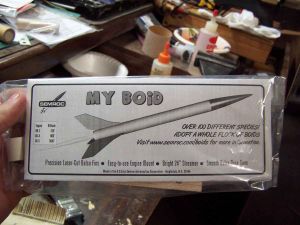 As mentioned before, My Boid came with three balsa fins. They were in good shape and quickly removed from their parent material. I then sanded the leading edges round and tapered the trailing and outer edges.

Next came the real purpose for this exercise. Previously, when I had used label paper to seal a fin, I would press the unsanded fin flat on the paper and then trim away the excess. I would then turn the fin over and do the same thing on the other side. Then I might, or might not, try to sand the desired profile into the fin.

This time, I took the sanded fin and laid it flat on the label paper. The fin was then "rolled" about its leading edge and pressed into the paper on the opposite side. This allowed the paper to follow the contour of the leading edge and provided for a much cleaner appearance. The label paper was then pressed flat against itself at all the other edges and a razor blade was used to trim away the excess. It was not a perfect job but I think it will get better with practice and when I find my X-Acto knife.

The mounting of the motor mount into the airframe BT should have been a simple matter. I managed to mess it up anyway. I was supposed to leave about 1/4" of the mount protruding from the end and I made the appropriate mark on the mount. I then swabbed some white glue inside the BT and inserted the mount. It was a tight fit and I really had to put some effort into the pushing. All of the sudden it moved...too far...and would not move again. My motor mount is usable but pushed in just a bit too far.

As the motor mount glue continued to dry, I mounted the screw eye in the nosecone and added a bit of white glue to the threads to make it hold better.

In order to promote a stronger joint between the fins and the BT, I used a needle to poke a series of holes along the mounting line. I pricked a similar series of holes in the root edges of the fins. The fins were then glued in place using a double glue joint of white glue.

As the glue on the fins set up, I also applied the launch lug flush with the aft end using white glue.

White glue fillets were applied to all the fin roots over the course of 2 days.

All that was left of assembly was to tie the elastic to the Kevlar® and then to the nose cone. It was an easy build.

Finishing:
Finishing of My Boid began with a decision about what I wanted it to look like. I decided to try and keep things in the "bird" family and was wondering how to reconcile that with my lack of artistry. I looked over towards my paint shelves and saw blue and orange, two colors I seldom use. Then and there I decided that my My Boid was going to be called the Roadrunner, the mascot of my engineering school, UTSA Roadrunners. The school colors are blue and orange and it seemed a simple enough idea.

I gave the rocket a gentle sanding, brushed it off, and then sprayed on two coats of white primer. The primer was given 2 days to dry.

When the 2 days were up, I gave the rocket a light sanding and then applied 2 coats of orange.

The orange was given an opportunity to dry and then the fins and nose cone were masked so that the BT could be painted blue. It was then set up in the booth and given 2 coats of blue.

When the tape came off, it was looking good. The bleeds were insignificant and the colors worked together better than they ever did for UTSA. I decided to go ahead and try to make some decals.

I located an image of the UTSA Roadrunner on the internet and downloaded it. It's different from what I remember. I opened the file in Photoshop and resized it to where I thought it would fit on the fins. I printed it out on a laser printer and found I was a bit too pessimistic on the size. From there, it was a simple matter of applying one decal to each side of each of the three fins. I also spaced three smaller ones around the nosecone.

It's not fancy but I think the addition of a little decal dresses it up a bit. The rocket is ready for its maiden flight.

Flight and Recovery:
My Boid was the first launch of the day when it went for its maiden flight. I loaded some dog barf and a 1/2A6-2 motor, mostly because I happened to have one sitting in front of me when I got through setting up the range. It took off nice and straight and, as expected, did not go very high. It probably could have coasted another second before ejection but all in all was a good maiden flight. A video of the flight can be seen here.

The second flight was nothing less than spectacular. I loaded an A6-4. I announced the flight and the rocket took off and kept going. I had announced it as an A6-4 but was accused by some of having loaded a B and by others a C. It went way up there. On retrieving it, I made sure the rocket was visible the whole time and made a production of removing the motor in front of witnesses. It was indeed an A6-4. It was also an impressive flight. A short video of the flight can be seen here, but it's not very long because I cut it off when I lost sight of the rocket.

Summary:
As I explained to begin with, I did not build this one as anything but an exercise in a new fin masking procedure but it turned out nice. I like it.

As a learning rocket in a bulk pack, it is especially nice because each person's will be a bit different.