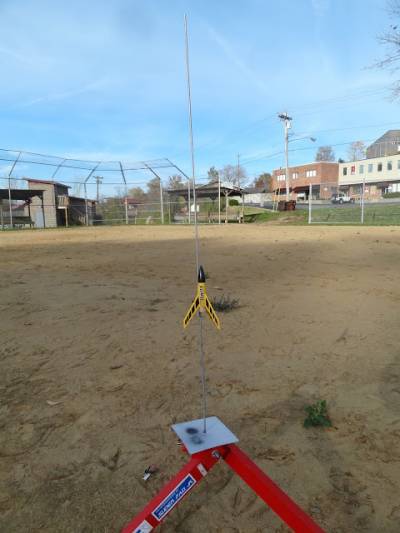 For the old-timers, the 220 Swift is simply a Mosquito in an updated body with sticker graphics.  The Swift is another of the "fire and forget" mini engine birds.  I can't imagine that the recovery rate on these is anywhere close to 30%.

Construction was the soul of simplicity.  Three fins are cut out of the supplied balsa strips and attached with wood glue.  The launch lug is attached and the nose cone glued in place at the top of the body tube.  That's it.  You're flightworthy.

Finishing can be as quick and easy or as complicated as you wish.  I went the complicated route for both of mine since there wasn't that much surface to sand and I wanted a nice looking death portrait.  After attaching the fins and before attaching the nose cone and launch lug I sprayed the rocket body with primer, sanded, then sprayed again.  This was followed by a smear of thinned Elmer's Fill & Finish (or whatever they're calling it this flying season,) which was allowed to dry, then sanded off.  I determined that it looked good enough and attached the launch lug, then re-primed.  The body was sprayed with a gloss yellow that I've had knocking around my shop without a label for several years now.  (It may be Valspar Bumblebee Gloss, but I can't swear to that at this point.)  The nose cone was primed and sprayed with Valspar Gloss Black, something I am sure of.  Once dry, it was glued in place with a smear of epoxy to hopefully withstand the ejection charge, and, in the case of the second Swift, the sticker decals were applied. 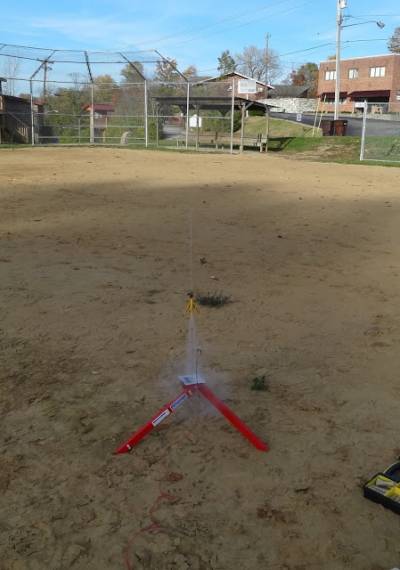 So far I'm 0fer when it comes to flying the Estes 220 Swift, so I'm calling this the CON section.  It may be a great little rocket, but having lost both of the two I've built I can't make that determination.  First flight was on a 1/4A3-2T motor and was a series of kindas, as in kinda saw the liftoff, kinda saw the ejection, kinda thought it fired off in the direction of the trees at the top of the hill at B6-4 Field, and kinda heard it falling through the branches.  And despite the fact that it was painted a kinda bright yellow, I never saw it again.  I was kinda bummed because I flew it before I had a chance to put the stickers on.

For the second flight, I learned my lesson.  This time I set the pad closer to the center of the field behind second base.  In theory this would keep the Swift from coming down near the trees in the outfield and keep the bright yellow rocket on the field of green/brown where I would stand more of a chance of recovering it.  Once again I chose the 1/4A3-2T, because it was the smallest available motor, and not likely to overfly the field.

The previous rocket I'd flown that day was the Custom Sunracer, a straight flight that stayed within view, (but impacted the infield and rekitted itself.)  I was hoping for something of the same flight profile, but without the on-field mess.  The Swift left as quickly as expected, but I actually caught it in frame for both an ignition and liftoff shot.  Unfortunately I could see that it was kinking to the right as it left the pad, but that would put it out toward deep left field where there was plenty of recovery room.  I heard the ejection charge and waited silently, listening for it to make any sound that would give me a direction to look in.  Not even the birds chirped.  Nor crickets.  I suspended flight operations for twenty minutes to walk the entire outfield, the school parking lot, AND the parking lots across the street.  I checked the former 1/2A6-2 Field, looking for anything resembling a yellow spot.  Not a thing.  Disappeared from this earth, just like the other one.

Since I've never recovered one, I'll suspend judgement on this facet of the Swift's performance.  On second thought, no, I won't.  I'm not a fan of the whole Fire & Forget thing. 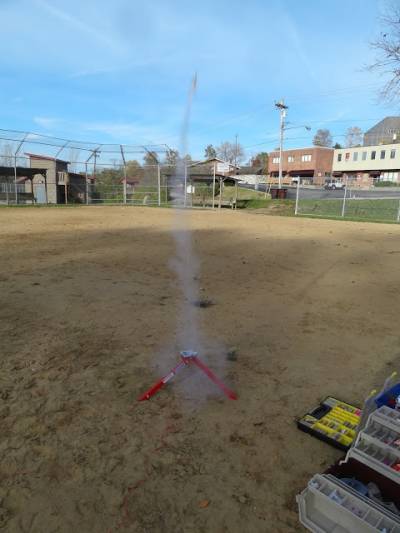 I guess a rocket like this might appeal to someone with a big field and lots of eyes, but my past history at B6-4 Field has pretty much been a one man show.  I'll stick to something I can see. 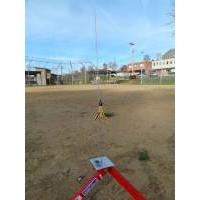 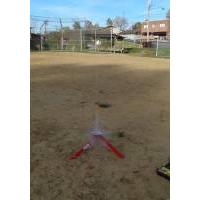 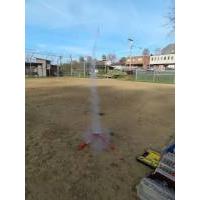 I'd like to start a petition to rename this one the "220 Kinda".

I also fly alone on occasion and am amazed I've found my Mosquito after four flights. It's only a matter of time . . .