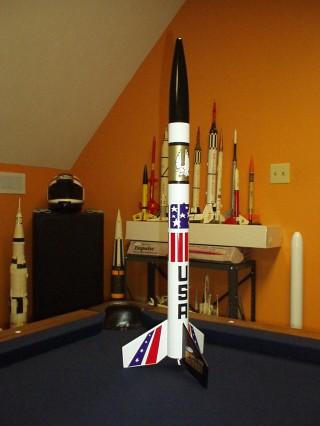 Brief:
I wanted to build a replacement Citation Patriot for a long time. When I first ran up on the Screamin' Mimi, I found exactly what I needed. The Mimi uses the same 18" BT-60 and PNC-60AH nose cone as the Patriot, Omega and Red Max. I bought several Mimi kits in order to clone all of these rockets. Armed with plans and templates from JimZ, I set out to build my Patriot.

Modifications:
Construction of the Citation Patriot was straightfoward. I substituted a longer and stronger fabric elastic shock cord for the junk included in the Mimi kit. I also went with the original 18mm mount so I had to make centering rings to replace the 24mm rings in the Mimi kit. I accomplished this by using cardboard from a cereal box because that was the only cardboard I could find laying around the house at the time. I had to double each centering ring to make it strong enough to match the CRs that Estes uses.

I can't reproduce metallic colors on my printer so I had to order decals from Tango Papa. They looked good on arrival. I applied a few coats of Future Floor Polish to them before application. Tom sent out enough to make two kits and I'm thankful for that because I ruined a decal or two learning to deal with his very thin decal material. After application and a few days of drying time, I applied Future to the complete rocket. Future really brings out a beautiful wet look to the rocket in general, and to those metallic decals in particular.

Flight:
This is a clone of the original Estes kit in every respect including flight performance. I've flown it on C6-5 motors with flight profiles exactly like I remember them from the 70's.