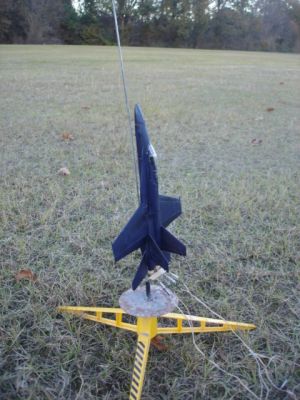 Modifications:
To begin construction, I glued the engine blocks inside the motor mount tubes using a spent engine casing and allowing 1/8" of the motor to stick out the back. After this dried, I took the bottom half of the plastic body and laid these two tubes inside of it where they pressed up against the plastic stop in the middle of the body. They hung out slightly from the two engine holes in the back. I aligned these until I thought they were in the straightest and best looking place and then used 15 minute epoxy to hold them in that place. I did this by just pouring the epoxy around the motor tubes at both ends. I allowed some of the epoxy to flow down inside the forward ends of the tubes to better hold them in place. Just be sure to have room in the tubes for the ejection charges to escape. I then cut an Estes style shock cord mount out of a piece of paper and used epoxy to attach this just aft of the forward landing gear well. The small gap between this landing gear area and the inner wall was a great place for the shock cord to come through and it gave it added strength. 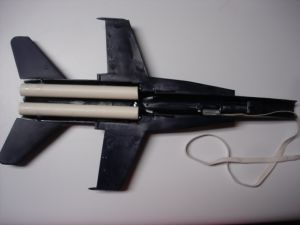 While this was setting up on the lower half, I next worked on the upper half of the body. The only really work that had to be done was the placement of the cockpit windows so the ejection charges could not leak out through the hole in the upper body section. First, the small U-shaped plastic piece was epoxied in place around the area where the cockpit chair would have been placed. Next, the two clear windows were epoxied on over this and epoxy was placed between them to be sure to seal all gaps.

After these two sections were set, the rear horizontal fins were put it place. There is a plastic bar connecting the two which must be cut. I left a small portion of this bar on both fins so these could be placed through the holes in the sides of the body and epoxied to the motor mount tubes. I then placed epoxy on the bottom edge of this fin and attached it to the bottom half of the plastic body tube. 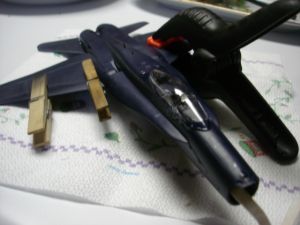 Next the two halves are put together. I covered the seam in epoxy all the way around and applied liberal amounts of in on the wing areas. I was afraid that the two halves may come apart during flight or due to the ejection charge. I then used strong clamps on each wing to hold it all together flush.

Once that was dry, I used epoxy to attach the vertical fins. I just placed the epoxy on the bottom edge and on the tabs and slid them into the slot.

The trickiest part was getting the nose cone to work. I wanted to use the one that came in the plastic kit but it has no shoulder. I decided to make one using two small pieces of balsa wood. I epoxied them to the inside of the nose cone with half of each piece sticking out. Once it dried, I shaved off pieces of each one until it finally fit snuggly on the top of the rocket. I then used another Estes style shock cord mount to attach the other end of the shock cord, and tied a streamer to the cord near the nose cone.