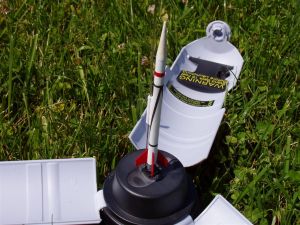 Brief:
This is a Micro-Maxx powered scale model of the Sonda II B from ASP. The real Sonda II B is a Brazilian sounding rocket first used in the 1970s. 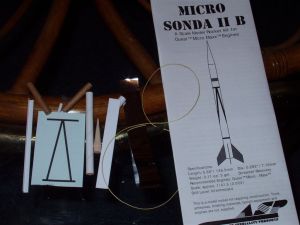 The instructions were straightforward and easy to follow. The only problem I had was fitting the couplers in the main tubes after tying the Kevlar® thread around them. It made the fit tight and pushed the tubes out a little although it's not noticeable. On the top coupler, I cut a small slit down the coupler, wedged the Kevlar® thread into it, and put a little CA glue over it. This made the fit a little better. I used Duro Quick Gel, which is a thick CA, for the fins and that seemed to work well. It set fast and was easy to work with.

Finishing:
I used Elmer's Fill 'n' Finish on the body tube. For the nose cone, I used light coats of yellow wood glue between sanding. I used two coats of primer, two coats of white, and two coats of red. After applying the decal I sprayed one coat of Krylon Matte finish. I deviated from the instructions and used Krylon Banner Red instead of florescent red. Now I wish I'd gotten some florescent red. The red I used doesn't look as good. The paint job looks a little sloppy. I used masking tape to mask off the fins and top band. I painted a coat of white after applying the tape to prevent bleeding before painting the red but some occurred anyway. The decal went on OK and was easy to work with.

Flight:
The only motor option is MMX. This is the first time I've used the Quest MicroMaxx launch system and do not recommend using the Quest launch controller or at least recommend carrying some alternative launch method to the field. The 9-volt battery just doesn't have enough power. I made two attempts using two new batteries and could never get one to ignite a motor. I cut the launch controller cable and wired it to my AeroTech launcher using a 12-volt gel cell. This worked fine every time. Maybe other folks have had success but I could never get the Quest controller to work. The first and third flights had straight boosts. The second flight was a little squirrelly near apogee. 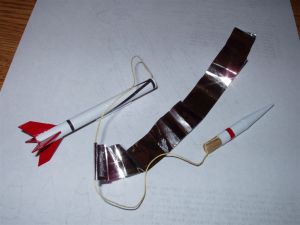 Recovery:
The steamer deployed on the second and third flights but not on the first. I think it was because I forgot to secure the motor and the motor ejected instead. The instructions recommend wrapping the Kevlar® thread around the streamer after folding and rolling the streamer. Instead of doing that, I folded the streamer several times then folded each end of the Kevlar® and slid all of it in the tube. The streamer got a little burned on the third flight maybe from not using enough wadding. I used just a little flame retardant cellulose insulation but probably not enough.

Summary:
I think this is a great kit and very good quality. The only thing I didn't like was the method of securing the Kevlar® to the tube couplers but that was no big deal.