The Aerospace Specialty Products (ASP) V-2 is a scale model rocket kit of the German Vengeance Weapon 2 (V-2) that was developed before and during World War 2. It is approximately 1/40 scale, uses 24mm motors, (or 18mm motors with an adapter) and stands just over 14" tall. This kit requires a 3/16" launch rod as well.

The V-2 kit arrived in the familiar clear plastic bag. It was shipped from ASP in an express mail (great service) box that shielded the components from any shipping damage. All of the parts were in the kit and none were broken. Included in the kit is a pre-weighted balsa nose cone, pre-drilled balsa tail cone, a sheet of basswood for the fins, two basswood strips for detail pieces, elastic shock cord, a heavy duty Mylar parachute kit, and the usual assortment of cardboard tubes for the body, motor mount, and various adaptor rings.

The instructions are printed on four sheets of 8.5x11 paper, and there is another sheet of instructions that comes with the parachute kit as well. The instructions are presented in a logical order that was easy to follow and made sense. There are 20 steps to build the rocket, and 15 illustrations to help you along the way. There is a sheet of templates used in the building of this kit. The templates are included for the fins and servo pods, and there are marking guides for the fins and tail cone.

This is not an easy kit to build. The instructions rate the kit as beginner/intermediate, I would rate it as intermediate/advanced. I did not find it difficult, but time consuming in the build process. This kit required patience to complete as many of the steps are time-consuming. I shouldn't have to say this, but, read the instructions thoroughly. You will be glad that you did. If you follow the instructions there should be no Gotchas or surprises along the way. Take care in marking the tail cone as this is the critical alignment for the fins that will be attached later. The fit of the parts is up to the builder. Most of the wooden pieces are cut, carved, sanded, or otherwise shaped by the builder. So it is up to the builder to ensure that they fit properly.

This is not your pre-fab- shake-the-bag rocket kit. This is a kit for a craftsman to build to get good results. All that takes is time, do not rush the assembly of this kit. A good suggestion in the instructions is the use of a palm sander for the shaping of the fins. This is a real time-saver as the fins are hard basswood and do not shape as easily as balsa.

The only complaint I have is the relative weakness of the balsa nose and tail cones relative to the basswood fins. I found myself filling and refilling various dents that randomly adorned those pieces. They are very soft. A harder balsa, or even basswood for the nose cone (it needs the weight anyway) would be a nice change to this kit.

No special tools are needed for the construction of the V-2, however as previously mentioned, an electric palm sander really helps in shaping the basswood parts. I personally would not want to attempt this kit without one.

The model is finished with your standard rocket techniques. The instructions include steps to guide you through those steps if you are unfamiliar with them. I used thinned "Elmers Wood Filler Putty" in many places on the model. There will be gaps around the servo pods that sanding sealer will not fill. I also used the putty to create fillets for the fins. I followed pictures of the real V-2 to get the proper looking joint. While I was at it I also added a rather large fillet around the launch lug with the putty as well. This helps the lug blend into the body better.

In the instructions there are two different painting diagrams. The simpler one is a version used by the Germans in testing of the rocket. The more complex one is a version that was test fired at White Sands. There are almost as many paint patterns for this rocket as there are pictures of it. The Germans had many various versions for their test firings, and at least four completely different camouflage schemes before they settled on a basic olive drab during the last weeks of the war. I chose the second "ragged camouflage" scheme as illustrated in the book "V- Missiles of the Third Reich The V-1 and V-2" By Dieter Holsken, a book worth getting if you are interested in the V-2, as it is full of good photographs, and diagrams.

It stands to reason since there are many paint configurations of the V-2, that there are no decals included in this kit.

Take your time building this rocket and the result is one beautiful V-2. I'm almost too scared to fly it. 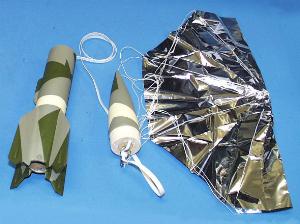 The recovery system in this rocket is your standard elastic shock cord that is attached to a screw eye in the nose cone, and to the outside top of the engine mount. I have my concerns here since I have seen many a shock cord burned through by the ejection gasses. I would be more comfortable seeing a Kevlar tether attached to the engine mount. The Parachute is a 15" mylar heavy duty ASP kit. The heavy duty kit has shroud lines that go over the top of the canopy for added strength. the parachute comes with a heavy duty swivel snap for ease of removal of the parachute.

Preparation follows the standard procedure, but includes inserting the wadding into the engine tube. This is a necessity as there is not much room in the body for the parachute, or anything else. Take extra care to ensure that the shock cord is well protected from the ejection gasses.

The first flight used the C6-5 motor with the 24mm to 18mm adapter. There was a slight wind and the pad was set slightly into the wind. The V-2 weather-cocked and launched on a ballistic path, much like the real rocket, fortunately ejection was still high enough in the air for a good recovery, unfortunately the parachute tangled and the model hit the ground rather hard. Damage consisted of the loss of the first 1/2" of the nose cone, and the rest of the rocket was in good shape. The assembly of the parachute has the shroud lines going over the top of the canopy of the parachute, these are held in place by squares of tape at four points on their path. I concluded that these shroud lines must be taped the entire length of the run to eliminate the possibility of future tangles, the last thing I want to see is this rocket heading to the ground without a parachute, again. A trip to the local hobby shop provided me with a roll of gold mylar pinstripe tape that did the trick. Once the parachute was fixed then I added some more putty to the nose cone to eliminate the truncated shape and make it look BC, or Before Crash.

The second flight used the modified parachute and a D12-5 motor. Launch was spectacular, fast, straight, and nearly out of sight. At apogee, or very close, the parachute was deployed and this time it worked (yea!). The parachute gives this model a pretty good rate of descent, and it floated clear over the junior high school and landed on the football field on the other side. The only damage from this flight was a small scorched section of one fin, next time I will put the rocket higher off of the blast deflector. I also noted that the shock cord is a little singed. It will be a matter of time before this part fails.

Everything considered, this is a very nice kit of a historic rocket that most everyone will recognize. Take your time and this is a kit to proudly display, and fly. Replace the elastic shock cord with a nice long Kevlarone and this will be a great kit. As it stands, take care in launch preparation, especially if you are using those D or greater motors, and inspect the shock cord often and you should be fine.

This model is very close to identical to the Centuri SuperScale V2, with the exception of the 24mm engine mount. The original flew with 18mm engines. The Centuri kit also had a pre-drilled nose cone with lead weights - but you had to glue them in yourself! The original was also rather heavy as most accurate V2 models tend to be, since they require a far-forward CG with accurately-sized fins. Worse still with enough nose weight to handle 24mm motors, and basswod fins. But of course the weight is highly dependent on the density for balsa used for the nose and tail cone. I did not find this kit hard to build at all. There's a good bit of woodwork, but it's fairly easy. Besides, a little planing, carving, and sanding is good for the soul. I built mine with kit parts, but if I do it again I will for sure replace the fins with balsa. Bass is just not necessary, and it's very heavy for it's strength. If you want it to be super-durable, make the fins out of 10-12 lb. balsa, form to shape, and cover them with GM silkspan and dope. Stronger and lighter than bass. The only difficult part is the fillet area. This is not at all a function of the kit, but of the prototype. To get the radius to look right and symmetrical on all 8 fillets takes a sculptor's touch. I used Aeropoxy Light filleting material and a lot of patience. The material was fine, but the results were strictly a function of eyeballing the right shape. It was just OK, not great, even using templates to cut masks for the edges and only making the two adjacent fillets at a time. There's gotta be another way!