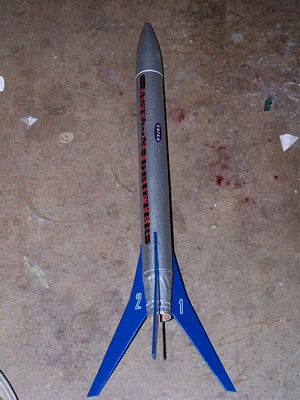 Brief:
The Atron Drifter is an old line Estes kit that Balsa Machining produces a kit for. The kit comes with materials except for parachute and decals. I got a set of the classic decals from Excelsior. The kit is also sold without plans but a web address is given to download them.

Construction:
The first step in construction is to locate the coupler tube and the ring(s) intended to be fitted to the end. I was a little fuzzy about this because the context of the downloaded instructions implied that there would be 2. The kit only had a single one and I can imagine how that might work. I fired off a question to BMS, glued the one ring in place and turned my attention to other aspects of the build.

The motor mount itself was simple enough. A thrust ring was glued into the end of the motor tube.

The nose cone was a nicely turned piece of balsa but here there was a slight deviation from the instructions. The instructions indicate that the eye screw needs to tap its own hole for mounting. In reality, the centerline of the nose cone was already drilled to a significant depth in a diameter much greater than that of the screw threads. This seemed fairly inconsequential to me and I filled the hole with a surprising amount of yellow glue (it was deep) and then inserted the screw. 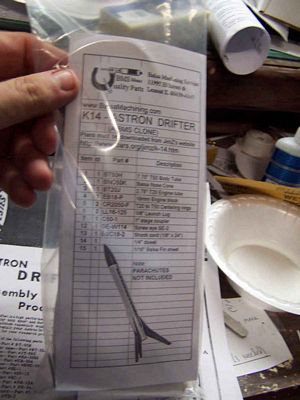 One of the features of this rocket is a boat tail design. The boat tail is formed from a rolled piece of paper with the outline marked upon it. The boat tail, a wraparound fin guide, and a fin template were all part of the package.

The boat tail was cut out, curled around the dull edge of some shears, and glued together with a hint of white glue. It was test fit on the motor tube and the fit was satisfactory.

On recent builds with balsa nose cones I have gotten into the habit of hardening the balsa with CA. I did that on this rocket as well using thin CA drizzled over the cone. When dry, I sanded and added another coating after which I sanded again.

BMS responded quickly to my inquiry and it turned out that indeed 2 centering rings were intended for this rocket. They mailed out a replacement plus a spare and got it to me quickly. With the ring in my possession, I was able to glue it in place on the opposite end of the coupler tube as the first one.

The Astron Drifter is supposed to use an Estes style tri-fold shock cord mount. Since I detest these, I instead cut a notch in each of the centering rings large enough to pass a Kevlar thread. I then passed the Kevlar through the notches and slipped the coupler tube in place over the motor mount. The Kevlar was then tied around the motor tube and filleted into place with yellow glue. The boat tail was slid into place against the rear of the motor mount and secured with some white glue. When the glue on the boat tail was dry, some more was placed in the aft end of the body tube and the motor mount was shoved into place.

I left the body tube/motor mount/boat tail assembly to dry overnight and ran into a problem. Little 6 year old hands decided to investigate some of the mysteries of what I do in the garage sometimes and apparently considered to boat tail to be a real touch and feel exhibit while the glue was still setting up. The result was a pretty wrinkled boat tail. I could have and should have made another one but laziness and the heat in the garage were working against me and I decided to just go with it.

The next actual construction step was to locate the wraparound fin marking guide. I had two of them. One was included in the kit and one was printed out with the instructions downloaded from JimZ. They were identical and I cut one out and taped it into place so that one of the fin lines was aligned with the boat tail seam. I then transferred the fin marks to the body tube.

The fins were of nice material and practically jumped out of the parent stock. I expended a minimal amount of effort in rounding the leading and trailing edges and pronounced myself satisfied.

The fins were placed using yellow glue and the double joint method. They went in place so that the back of the root edge was at the bottom of the boat tail. When the glue joints on the fins had dried, I began to apply white glue fillets. It was about at this point that I realized that I had forgotten my intention to "seal" the fins with label material. I wanted to do this to ease the finishing process and because I intended to used a streamer instead of a parachute and had been warned that the swept back fins would be prone to breakage.

Some sewing elastic was tied to the nosecone and the Kevlar and I thought construction had been completed until I glanced at the bag and found the launch lug. The lug was glued along one of the fin root edges with white glue and then construction really was done. 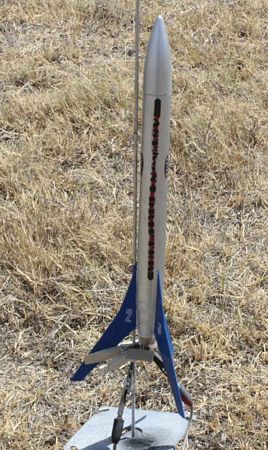 Finishing:
As I mentioned before, I had intended to use label paper to seal the fins but forgot until too late. Since this project was never going to win any beauty contests and I was not planning on any competitions, I decided to try another experiment which had gone alright on some balsa nose cones. I drizzled thin CA all over the fins to try to do some filling and to give them some strength. When it was dry, I sanded it down. It was not perfect, but considering the boat tail, it would do.

The Drifter was taken to the booth and given 2 coats of Kilz primer. After a day, the Kilz was sanded down. It seemed that the combination of CA and Kilz had done an adequate but not great job of filling the balsa.

The rocket was then dusted off and placed in the booth. It was given 2 coats of metallic hammered silver. Not a great deal of attention was paid to the fins since they would be painted another color.

After a day to let the silver dry, I masked the body of the rocket leaving only the fins and the launch lug exposed. The rocket was then taken to the booth and sprayed with a bright blue. When it had started to harden a bit, it got another coat. The masking was then removed and the results inspected. As I mentioned before, the rocket was nowhere near perfect due to my own blunders, but I was satisfied.

I got the decals for this kit from Gordon at Excelsior Rocketry. They were good quality waterslide decals and consisted of 2 long logos in red and black, some white numbers, some black numbers and a pair of old style Estes logos.

Working from memory, I placed the long logos along the body tube on the two sides without the launch lug. The numbers, I went with the white, were placed to number each of the three fins. The Estes logos went below the long logos.

I gave the rocket a coating of Future and it was ready to fly. 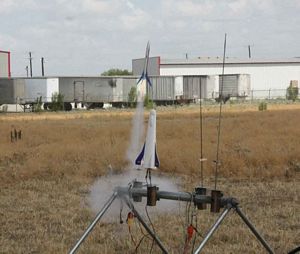 Flight and Recovery:
Since this is a light rocket meant for duration, I wanted to start out with a small motor and chose a 1/2A6-2. A streamer was connected to the elastic, the motor was inserted and the rocket was taken out to the pad.

When the launch button was pushed, it shot up quickly flying straight and true. Ejection occurred while the rocket was still moving up at a pretty good clip but everything came out fine and it began its descent under a streamer. When I got to the rocket, I was glad to see that those long fins had not broken. It was fine to fly again.

For the second flight I loaded an A8-3. I knew at the time I should have gone with a 5 second delay but I had a 3 sitting on the table in front of me. I loaded the motor and took it out to the pad. Upon launching, it really screamed upward on a full A and soon became very difficult to see. Ejection occurred early once again but the streamer deployed fine and it drifted back down with no damage. 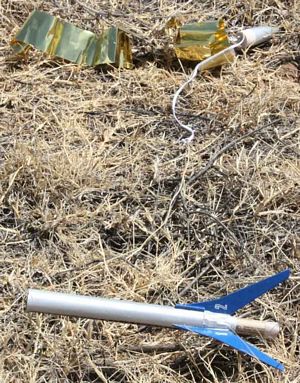 Summary:
I can see why this was a real contest contender back in its day. I think it would continued to be competitive if I were a competitive type. The kit is easy to build and flies great.