Brief:
A very basic 3FNC rocket that doesn't quite perform as advertised. Supposedly the rocket will feature helicopter recovery at motor ejection, but doesn't. 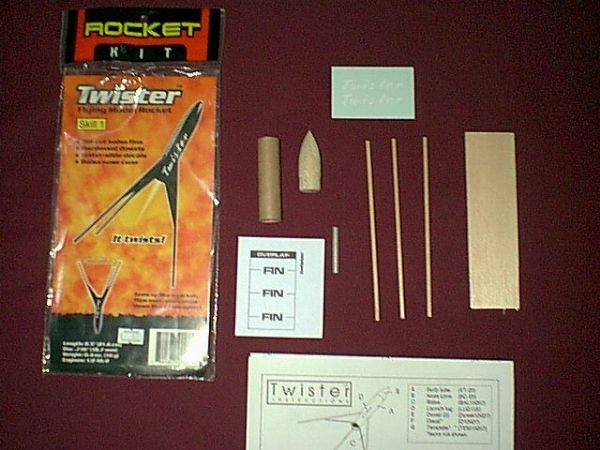 Construction:
The basic kit consists of a short piece of 18mm body tube, a real balsa nose cone, a sheet if pre-cut balsa fins, a launch lug, decal, and 3 wooden dowels. The kit is very similar to the Rogue Gnat, but larger and with wooden dowels.

The instructions were about as simple as they could get, and were pretty easy to follow if I had chosen to do so. This kit is so simple instructions are not required. Everything fit perfectly, the balsa was a better grade than I've ever seen from Custom, and the assembly steps were in a somewhat logical order. Most basic model building tools would suffice; however, you could get by with nothing more than a piece of sandpaper and some Elmer's wood glue.

There are only a couple of CON's: The body tube seems a little thin when compared to other kits, and the instructions mentioned nothing about why the rocket was supposed to spin on recovery. I would have to deduct points for the fact that this rocket will not spin, twist, or tumble if it is built per the instructions. And since the instructions never give any indication of why it is supposed to, it could be confusing for a beginner. This thing simply lawn darts. To alleviate the lawn darting tendencies, I sanded each fin into an asymmetrical airfoil, in hopes that it would induce spin. I figured that the rocket would be travelling too fast on the way up for the airfoil to induce any spin, since the airfoil would stall, but on the way down, it should be going slow enough for the airfoil to induce a low pressure region that would induce "lift", thereby spinning the rocket. At least it was good in theory. 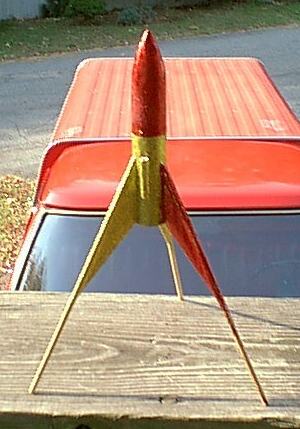 Finishing:
Finishing this rocket in the suggested paint scheme of black looked a little drab to me, so I went back and coated the upper half and one fin of the rocket with Elmer's Squeeze Creations we had laying around the house. Basically, this stuff is colored glue with glitter in it, and goes on like glue. So, after coating the upper with red and the lower with gold, I now have a highly visible rocket that sparkles in the sun. The glue also added a little more strength.

Flight:
Custom recommends a really low powered 18mm motor. However, I prefer to use a 13mm A motor with an adaptor, since they are a little cheaper and come in a pack of 4 instead of 3, so there's a little bit of savings there. OK, so I'm cheap.

Preparation for flight couldn't be easier: Just pop in a motor, add the ignitor and launch. Motor retention is friction fit, with the nose cone acting as the motor block. The motor is supposed to eject, and by some mythical process, the rocket is supposed to spin coming down, though Custom never addresses the issue. Expect straight, rapid flights on a low powered A sized motor. I wouldn't launch it on anything larger than a B6-6, or you'll never see it again, even if covered in glitter. But the thing needs to be built as sturdy, because it'll lawn dart every time. My little airfoil experiment is a mixed bag of success and failure; it'll induce some spin, but the fins are too small and thin to produce anything like what Custom describes on the package. My suggestion is to cant the fins a few degrees off center, inducing spin. The recovery will make for a "heads-up" launch every time, and is why I rated flight so low. If it weren't for the lawn dart, I'd give this rocket a 5 for flight, but an object can only stand to fall from so high up a finite number of times, and even fewer if it burrows into the ground each time. So, expect a short lifespan.

Recovery:
There are no PROs to flight recovery on this rocket, other than the fact it needs no wadding. It preps quickly, flies quickly, and crashes quickly.

Summary:
In my opinion, this kit needed more R&D before Custom released it to the public. It flies great, on the way up. Unfortunately, it flies great on the way down too. It is reminiscent of the old Estes Scout, which was a dynamite little rocket, but loses a lot in the recovery system. I would definitely recommend this rocket to anyone looking to buy a kid their first or second rocket, but would add that the fins need to be attached off center to aid in recovery. all in all, the Custom Twister is an exercise best summed up as Caveat Emptor.