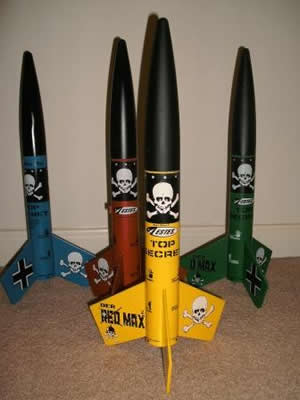 Brief:
This is my twin-engine modification of Estes' Der Red Max kit for the EMRR "Twice the Thrust" Challenge

Modifications:
Construction started with the two motor tubes. I cut a slit 1/4" from one end of the tubes for the hook, held it in place with masking tape and glued the engine block in place above the clip. With the clips on opposite sides, I glued the tubes to each other using epoxy. While they were drying, I placed a length of Kevlar into the joint as a shock-cord anchor.

Once dried, I fitted the two tubes into the coupler. A couple strips of paper were required to get a tight fit that did not distort the coupler. I glued this assembly together using yellow glue. As this dried I stuffed paper towels, dipped in a 50/50 solution of yellow glue and water and then rung out into the cavity between the coupler and the motor tubes to block the ejection charge from blowing out the back.

I let this assembly dry over night and filled and sanded the body tube, nose cone and fins of the rocket. I used three coats of Elmer's Carpenter's wood filler on the fins thinned with water, and the same to fill the grooves on the tube. The nose cone required a few dabs of Squadron green putty to fill grooves. 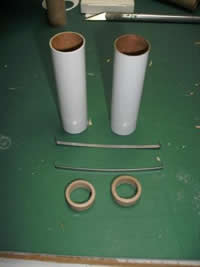 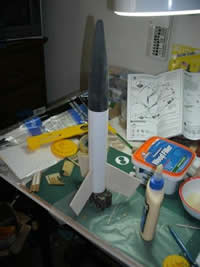 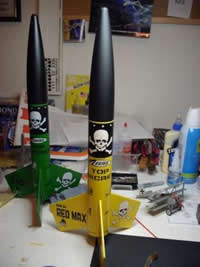 I glued the modified motor mount with shock cord into the body with yellow glue. I placed the motor tubes flush with the back of the rocket.

The rest of the assembly followed the instructions from the Red Max kit.

I finished this Max yellow and applied the decals as usual. After everything had dried, I used a Sharpie to cross out the "Red" in Red Max and ink in a "2" above the "Max" to make the "Max Squared" 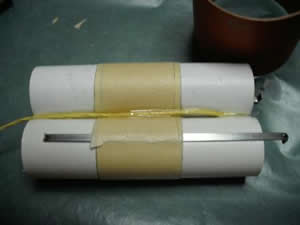 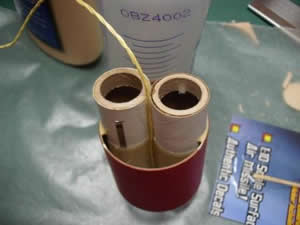 With the engines in place, I compared the balance point with the SpaceCad file I had created for this rocket, and felt the balance point was a bit too far aft, so i added plasticine clay to the nosecone (About a 1" by 1" by 1/2" piece) until the balance was about 1 caliber (body tube diameter) forward of of the CP. 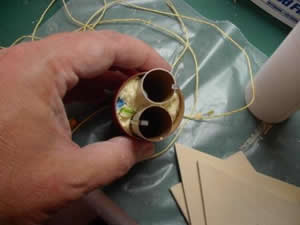 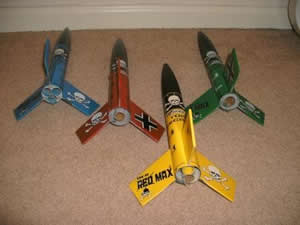 I love the Red Max kit. It is an easy build and looks great. This is an easy mod if you want to double your pleasure and get the "Max" out of this kit. It is a quick way to try something different without going too far out on a limb. The best part is you can fly this off your regular estes launch equipment if you have fresh batteries. Anything more than two won't work, though (believe me, I've tried).

Flight:
I tried this on three motor combinations A8-3's B6-4's and C6-5's. This was where SpaceCad came in the most handy. I thought the extra thrust might require longer delays, but SpaceCad indicated otherwise. It is a good thing, because the A8-3 was almost too long, I actually thought one engine had not lit, it was such a low flight, but everything was safe, and it worked well on all three motor combinations.

The B6-4 was the best flight. Nice and powerful, but stayed in sight. The C6-5's went almost out of sight, and I only caught sight of it when it ejected. Very spectacular.

I flew this rocket on a windy (10mph +) day, and there was no sign of weather-vaning. It flew very straight every time and only showed the affect of the wind when it deployed and that pirate chute opened up - then it was off to the races!

Summary:
I can't say enough good things about the Der Red Max kit. It is one of my favorites, and the decals can't be beat. It is a great kit to modify. I have build a "D" version, a three-engine version, and now a two-engine version. It is a very stable design that adapts well to modification. I now want to try a multi-stage max...

Other:
The only tip I can think of is in the decals for this kit. I have always had trouble with decals, and have struggled with the body-wrap decals like the skulls on black that go at the top of the tube of the Max. One trick I have found is to first paint the entire decal sheet with Micro-Sol liquid decal film. this thickens the decals and makes them easier to handle. This has helped me not tear the decals when trying to pull them into position. Also, a coat of this on the finished model helps seal the decals and reduce that "tackiness" that can sometimes make them pull off when handled.