Brief:
Estes Industries recently released the first production digital video camera rocket. I had read about the Oracle many months ago on an Internet user forum. The insider information described a low quality, short duration, video camera. I was pleased to learn that Estes had made a couple of upgrades before final release. This easy to build and great looking rocket with respectable digital video capability would make a worthwhile addition to any rocketeers fleet.

The camera uses a CMOS detector at 9 frames per second for 30 seconds. The controls on the camera are easy to use. When the rocket is on the pad and ready for launch, you just turn on power to the camera and press the Start button. A red LED will illuminate to let you know the camera is powered on and ready. After depressing the Start button, you will hear a series of beeps and a green LED will flash for 15 seconds giving you time to get back to the launch control. After that 15 seconds has passed, the camera will begin taking video. Only one video can be stored in memory at a time. The memory is wiped clean when the power switch is turned off so you'll need to leave the power switch on until you can download the video to a computer using the included USB cable. To conserve battery power the camera goes into standby mode after taking the video. I'm not sure how long the AAA battery will last in standby mode, but I'm guessing it would last long enough to get the camera home to download the pictures to your computer. A laptop at the launch site makes it possible to take more than one video at each launch.

Before your first flight, Estes recommends installing the video capture software and drivers provided on CD-ROM onto your computer and testing the video camera. The software installed just as described in the instructions. The rocket was delivered to me late in the evening so when I was ready to test the video camera, it was dark outside. I shot and downloaded two indoor test videos and both were so dark that very little showed in the video. It made sense to me that the camera would be better at taking outdoor lighted pictures, but I was still amazed at how completely useless the camera was in an indoor lighted environment. The next morning, I went outside and shot another test video. The outdoor video was better than expected! By then I couldn't wait to see the Oracle in action.

After the camera is connected to the computer with the USB cable, you'll need to launch the capture software. The application is named TwainApp. The video capture software is extremely simplistic but not very intuitive. There is no help file--not even any bubble help pop ups on the button controls. To get your video out of the camera, follow the simple steps in the instructions. While testing the video capability, play around a little with TwainApp. Since the camera only holds one video at a time and the TwainApp starts fresh with each video capture, the default save name will always be vid0000.avi, so be sure to rename the file after each video capture (to prevent it from overwriting any previous videos).

This rocket is an E2X kit, which means it is easy to build. The instructions were clear, concise, and well illustrated. So much of the rocket was pre-assembled that there were really only 3 steps to complete the rocket: glue the body tubes together, glue on the typical Estes shock cord mount, and tie the shock cord and parachute to the nose cone. The video camera requires one AAA battery. The battery cover is held on with a Phillips head screw.

I added tape around the tube coupler to compensate for the slightly loose fit. I then friction fit the tubes together instead of using glue.

Finishing:
No finishing was necessary. The Oracle came with a nice factory finish. 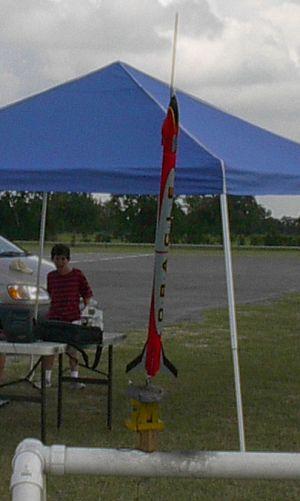 Flight:
The motor is held in place with a twist lock motor retainer. The 30 seconds of 9 fps video matches flight duration perfectly. I missed not having sound along with the video. Maybe Estes will add sound on a future version.

D12-3s were used for all three flights.

The first flight was perfect and the 30 seconds of video ran from liftoff to touchdown.

On the second flight, video was again perfect from liftoff to touchdown. The rocket landed squarely on one of the fins, causing it to pop off. The fin was not damaged though. The fin snapped back into the slot in the fin can and a little thick CA was used to hold it in place. It was ready for flight #3 in minutes.

I forgot to screw the motor retainer on for the third flight. I also launched the rocket early. The video started midway through the flight. At apogee, the motor ejected. Luckily, the motor was just tight enough to deploy the recovery system before it kicked out the back of the rocket. Due to the lighter weight, the rocket drifted further and so the video ended while the rocket was still aloft.

Recovery:
I was surprised to see the 12" nylon parachute. It was well constructed. The chute seemed to be sized about right. A slightly larger chute might yield a softer landing, but the video would no longer match the flight profile. I very much liked the hole in the tip of the nose cone for the parachute mount to provide ground video footage.

I'm not a big fan of the Estes shock cord mount method. I prefer a more robust engine mount type shock cord. I would replace the 1/4" rubber shock cord with a longer piece of Kevlar®.

Summary:
The Oracle was a pleasure to fly. The construction was extremely easy, the flights were straight, and the recovery went well. It is a great looking rocket and the video was acceptable.

I thoroughly enjoyed viewing and reviewing the video footage. The final .AVI file is roughly 65MB at 320x240 pixels. Just big enough to enjoy many details, but small enough to easily store, process, and send lots of videos. The Oracle is a great introduction into aerial photography. 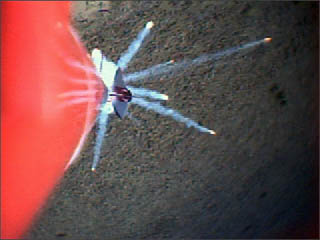 6/26/07 Oracle flight at the COSROCS/La Plata Investments "Thunderous Groundbreaking". The Oracle was flown out of the middle of 280 rocket mass launch (launched with a single button). ~350 people attended the event. 1.9mb http://www.brandango.us/funstuff/oracle%206-26-07.mov This camera is one of Estes' best efforts ever. Mine has asphalt darted and cowpie darted and after gluing it back together it still works like new. THANK YOU ESTES.

A great rocket when it came out but the software won't run on anything higher than Windows XP. I've tried to get it to run on my older laptop with Vista but no go. Same with my new PC with Windows 8.1. Called Estes awhile back but they were no help as it's a discontinued item and they weren't planning on upgrading the software. To Bad. Collecting dust for the last four years now as I no longer have a PC that will run Windows XP.