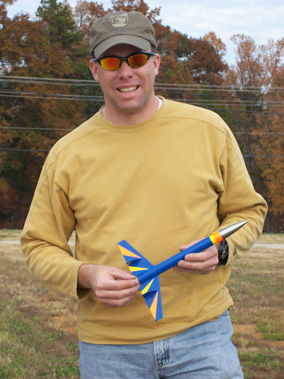 Brief:
The Avalear is the 2008 NEMROC 2008 commemorative kit. The design features two main fins that have finlets attached. The kit named after Glen Avalear, a long time friend of Jim Flis that unfortunately passed away.

Construction:
The kit includes a nice balsa nose cone, and a nice sheet of balsa for the fins. Also included is a Kevlar® shock cord and a nice plastic parachute. All components are nice quality.

The instructions for the Avalear are very well written with clear illustrations. Assembly order is typical with no surprises. The kit includes a thick paper template for the fins. The templates are used to transfer fin shapes over to the balsa. Once the fins are cut out and final sanded to your preference, it's time to glue them to the main body tube. The kit includes a nice jig to assist with alignment. The remainder of the construction is very typical with no gotcha's. Overall the assembly is very simple and should present no problems.

Finishing:
I sealed the balsa nose cone and fins with two coats of Minwax Poly®. I then brush on a coat of thinned lightweight filler on the balsa and body spirals. After sanding, I usually spray two coats of primer sanding between coats. Next up was two sprayed coats of Krylon™ for the color. Once dry, I used some Monocote™ trimsheets to add the stripes. 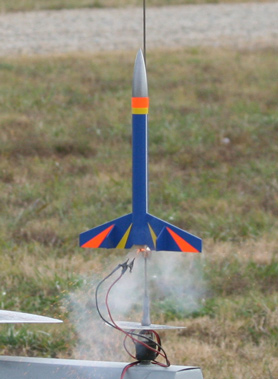 Flight:
First flight was with a A8-3. This motor provided a nice straight boost with a slightly early ejection. It left the pad in a hurry and I was surprised at how much altitude the A8-3 produced. The second and third flight used a B6-4. Again perfectly straight boost, with ejection just about perfect. The B6-4 provides some serious altitude and it gets going quickly. My recommendation while using a C motor would be to have some good eyes on it. All three flights were in about 5mph winds.

All three flights were perfect and each recovery produced no damage to the rocket. The 12" chute brings it down slowly so a spill hole might be a welcomed addition. With the fin layout it looks really neat in the air.

Recovery:
The kit includes a Kevlar® shock cord that attaches to the motor mount. A piece of 1/8 elastic is tied to the Kevlar® and attaches to the nose cone. Overall length of the shock cord is more than suffcient. Flight recovery on the first three flights were without issue, resulting in no damage.

Summary:
The kit was typical FlisKits™ quality, and I found no issues while building the rocket. I liked having to cut the fins out since it adds some steps to an otherwise easy kit to build. The jig that you assemble to help in aligning the fins proved to be very helpful. Overall it's a great rocket with a neat fin layout that proves to be more than you normal looking design. I think Glen Avalear would be more than proud!