Construction:
The Duce has one body tube and uses four fins. It comes with a very nice balsa nose cone and two parachutes. The motor mount is unique but goes together easily and works great. Two pre-cut engine mounting rings are included with in the hardware. A BT-60 body tube is supplied in the kit as well as 30" of thin shock cord. The 1/8" fin stock was high quality balsa. The assembly instructions included an extra sheet "Hints for Cluster engines". Two 18mm engine blocks were also supplied, as well as two 1" launch lugs.

The Instructions are easy to follow and the supplied templates work nicely. The critical issue with this model is the mounting of the engines.

With the supplied cardboard wrap around template for cutting out the body tube, the engine mounts come out just right. you will need a very sharp #11 Exacto blade or single edge razor blade to cut the ovals for the engine mounts.

We added a Flis Kits ejection baffel kit into the body tube of the rocket. I am very happy with these baffel kits as they seem to prevent burning of the shock cord, and calm the blast of the ejection charge somewhat. I have never had an ejection failure while using one.

Finishing:
The rocket was finished in the normal manner with some spray can primer, a little light sanding with #400 grit wet or dry sand paper then an overall coat of Testors White spray enamel. Next the lower half was masked off using masking tape and newspaper. The top portion was sprayed with Ford metallic blue automotive touch up spray paint from the auto parts store. The lower yellow fins were sprayed with Testors spray enamel from the hobby shop. 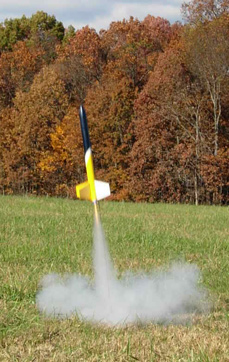 Flight:
The recommended motors are A8-3, B6-4 and C6-5. Two are required for each flight. The first launch used Quest ignitors twisted together. On the second and subsequent launches Estes ignitors were used in the same manner. B6-4 engines are perfect for this bird, C6-5's work well also. There are no motor retainer clips so the engines must be taped into the mounts at the bottom to ensure ejection. We test flew the Duce on a rather windy day and she tracked straight despite some angle to the launch rod to compensate for wind drift.

Recovery:
The shock cord is the cloth/elastic material and works well. Using the Flis Kits BAF60 ejection baffel kit worked out nicely. There was no burn through in three seperate two engine flights and ejection was nominal every time. The launch team decieded to use a couple of sheets of recovery wadding just in case. The supplied parachute was not utilized. An older Estes 15 inch chute was subsituted and worked fine, no damage on three recoverys.

Summary:
The Duce's Wild is a fun kit. Something differnt that flies great. The best thing is watching the two smoke plumes as it climbs skyward. Building the engine mount you have to be careful but the supplied template really makes it easy. Cutting out the second engine oval in the lower body tube can get a little dicy with the sharp blade! Be carful here. The large fins make this a stable craft and the cluster engines really make it a home sick angel! 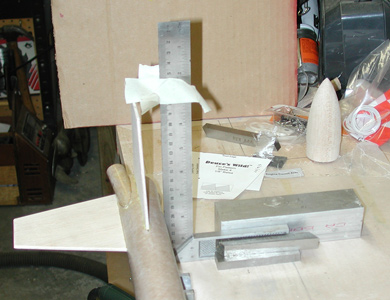 Other:
I wanted the fins to be exactly straight and 90 degrees. In order to set this up I used a 90 degree carpenter's square. I taped the rocket body down to a flat table top, then stood the square against the end where it could almost contact the fin. I used a piece of 3 X 5" index card taped to the fin to hold the fin exactly parallel to the square. The card was then clamped to the square with a clothes pin until the glue was dry. The next fin was put on 180 degrees to the first one, using the table edge as a "stop". The square was brought up as close as possible and that fin was held in place the same way until the glue was dry. And so on with the other two fins.