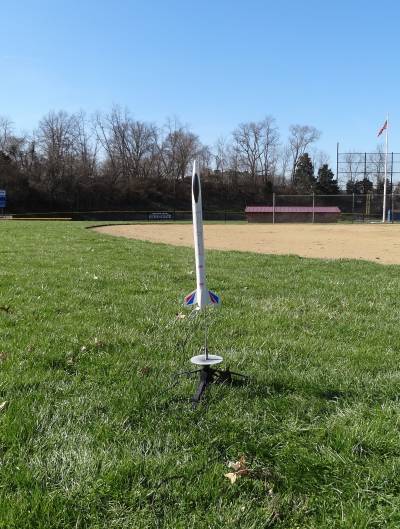 Talk about rockets that get no respect.  I bought the AstroSat LSX because I lost my scratch built Marauder on an ill-advised C6-5 flight at B6-4 Field back in the early years.  I filched the cone, then let the rest of the rocket sit on the dusty corner of the workbench until one night a couple of years later when I was bored and wanted something new to fly.  I'd come by a Sunward cockpit style nose cone that fit perfectly in place of the original cone, so I built the AstroSat LSX as a kind of Frankenstein bird, one that I could fly and not really care if it wound up in a tree.  Twelve years later it finally hit me.  This rocket is a great performer and as rock solid as they come.  I may need to change my attitude about semi-RTF birds.

This kit is an oddity in that the PNC-55IR nose cone is mated to BT-56 tubing.  This played into my hands nicely as the Sunward nose cone that I swapped out from the Gravity Rider kit was a PNC-56 cone.  Construction was a simple matter of gluing pre-formed plastic parts to other pre-formed plastic parts, then gluing that structure to a cardboard body tube.  I used orange tube Testors Model Glue, (the good kind,) in everything but the recovery system.  That was handled with the traditional Estes tri-fold mount, although I tripled the length of the shock cord that Estes had provided.

Pre-finished.  All there is for you to do is paint the cockpit windows and apply the sticker decals.  So little was my regard for this rocket initially that I didn't bother with the decals.  I stuck them into a folder with other orphaned decals, then ran across them one night on a search for something else.  I realized what they were and decided to apply them to give the bland bird some pizazz, but the years of flying nekkid hadn't been kind to the AstroSat.  The all white exterior got scuffed and nicked to the point that I wound up having to prime and spray it with gloss white paint before I even thought about applying the decals.  The decals applied easily and the finished product turned out looking a lot better than I'd expected. 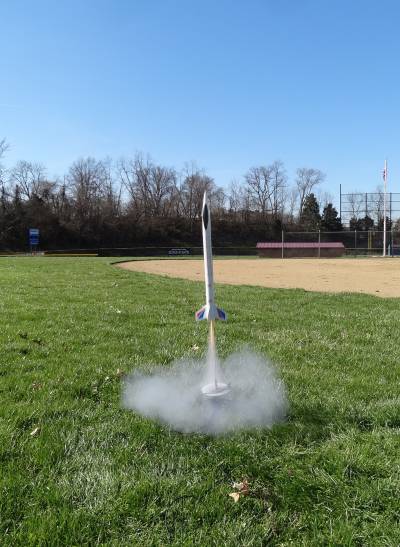 I brought this along as an afterthought for the first flight.  I took my son and some friends out to launch one Sunday and found all of our normal fields full.  Scrambling for ideas so as to not disappoint the kids, I thought of a little known field out on the edge of the NKU campus.  Finding it empty I christened it Skyline Field for its proximity to the Skyline Chili restaurant, which meant that the air smelled spicy the whole time we were flying.  Skyline Field was little more than a postage stamp of a field, making B6-4 Field seem almost cavernous.  Surrounded by trees on two sides, the restaurant on one and a road on another, I had no intention of risking anything good on this day of flying, and the AstroSat fit the bill nicely.  First flight was on a B6-4 and was straight up, straight down.  The flight was surprisingly high considering what I considered to be the piggish weight of the bird.  Ejection occurred just as it began to tip over, and the satellites were a hit with the kids, mostly because they weren't expected. It recovered softly on the 18" chute, landing in short center.  All in all a textbook first flight.  I had to give grudging respect.

The second flight was a field that I used a lot for a few years until they built a high school baseball field complete with an outfield fence on it.  This one was quite a bit larger than B6-4 Field, also flat and more wide open, but being as it was located on the Ohio River, the breezes were sometimes tricky to negotiate.  Not for the AstroSat.  Once again the B6-4 flight was textbook other than the landing in the gravel parking lot.  The AstroSat bounced and wound up with nary a scratch.

Flight #3 was the one that forever cemented the AstroSat as a gamer.  Steve Carr and I were flying at Rossford Park on Labor Day weekend.  Rossford is pretty expansive, so I decided to see what a C6-7 flight would be like in the city limits, and chose the AstroSat as my victim.  It left the rod quickly and took an immediate turn to the south.  Altitude was everything I'd expected, but I could immediately tell that recovery was going to be tough, as it arced out over several tall trees on the journey skyward, and now would have to clear them on the way back, all the while losing altitude with the parachute.  The AstroSat actually clipped a big Sycamore twice, but still managed to skirt disaster and land on the hillside that lead to the parking lot.  This bird was charmed.

It was ten years before I again dug out the now battered AstroSat, this time for service at B6-4 Field.  The three flights it's made there have all followed a familiar pattern, a fairly straight flight, high considering the bulk of this bird, followed by a gentle return via the 18" checkered chute.  I kind of look at it as the elder statesman of my fleet, but it's among a group of rockets that seem perfectly at home on the tight field.  That alone guarantees that it will get dragged out more often from here on out. 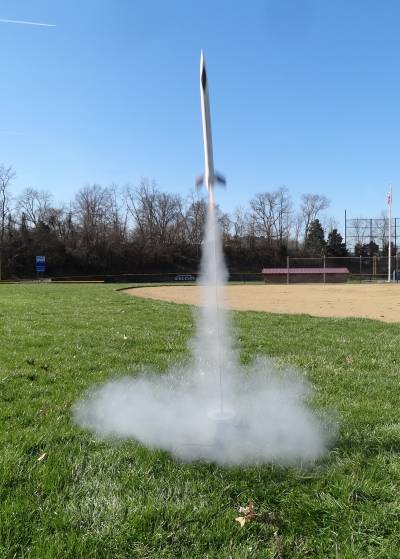 Recovery duties have been handled by the large checkered parachute since flight #1.  I bought a large lot of them via Ebay quite a few years back.  They were made from a black and white checked tablecloth and have proven to be incredibly durable and good looking in the air.  I've almost come to the end of my stash and no one seems to be offering a similar deal these days, so I may be scouting the dollar stores for checked tablecloths this spring. 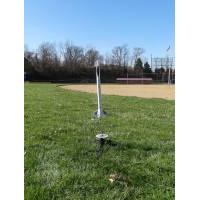 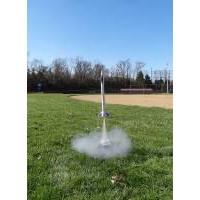 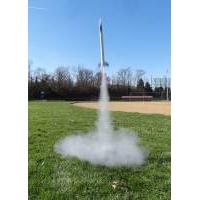 Sometimes these ready to fly, or nearly ready to fly rockets can be deceptively good. I have one that is nearly 20 years old (I don't even remember the name of it) and has flown on anything from an A8-3 to a D21-7 without any damage at all. I make sure it gets flown when we go out.