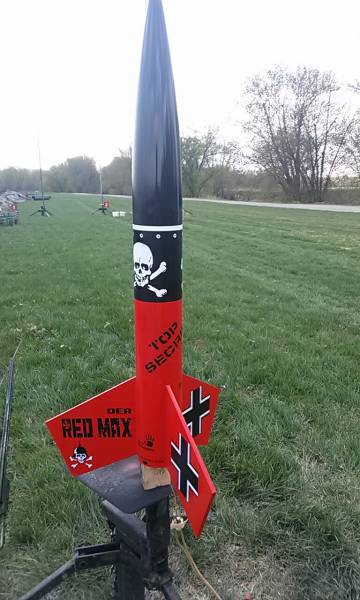 If you like the regular Der Red Max, you'll go gaga over the Pro Series II Mega Max!  I built this one kind of quickly along with the Pro Series II Nike Smoke, so construction was somewhat of a blur, but I was very impressed with the materials and design.  I felt you get a lot of value for your money with this one...well worth the coin!  Also the kit builds up to quite an impressive rocket...my wife and child each exclaimed "Wow! That's a BIG Rocket!" and each of my non-"rockethead" friends liked it as well.  Just a note though that if you get this kit as a first step on your road to BIG rockets, the motors start getting more expensive or more complex.  The suggested F50-6 motor retails for over twenty dollars.

Giant 16.5" nosecone, a heavy duty 4" main body tube and plywood centering rings are some of the more impressive parts.  Also included is the Estes Pro Series II motor retainer...I love these since they are simple, convenient and strong (note you need to epoxy the retainer to the rocket).  Fins are massive and made strong with a plywood center rib structure which is sandwiched with balsa sheets.  I thought this was a very clever way to have the fins strong, big and not overweight.  Some may think the balsa sheeting is too soft for such a big rocket, but I felt they were fine. Another impressive addition is 4 sheets of BIG decals...likely the largest I've ever seen.  Quite a lot of bang for your bucks I felt.

As noted earlier, I kind of rushed through construction, so I may be missing some points/thoughts I had, but I'll try to recall some key points.   Instructions say to use "Carpenter's glue" and I used Elmer's Wood Glue Max and got good results.The shock cord installed on the Centering Ring is much better in my opinion than the standard Estes tri-fold here; however I decided to tie the cord around the motor tube rather than just knot it at the centering ring since the nose cone is very big and I think a knot failure could mean doom for this rocket.  Through-the wall fins are a great design, but I would also suggest you leave out the last centering ring off the bottom until after you glue the fins so that you can apply internal fillets.  The fin construction is probably the most difficult/time consuming step (other than painting/decalling) because you need to glue balsa sheets together for each side of each fin (12 sheets glued in pairs into 6 larger sheets) and then you use the plywood center as a pattern to cut the sheets into the proper shape for the fins.  Finally you glue the sheeting to each side of the plywood fin and add weights on top so they glue flat. Some people have noted that their fins warped; however I didn't have such issue.

I thought about using self-adhesive label paper over them during construction, but due to time constraints, the added cost of so much label paper (6 entire sheets) along with not wanting to screw around with the weight made me skip what is normally part of my standard fin treatment in favor of following the instructions fully.

I did my usual thing of using Rustoleum Filler Primer (in gray) followed by filling spirals with Elmer's Carpenter's Wood filler, then sanding followed by LOTS of red Rustoleum Ultra Cover paint (red for body, black for nosecone).  One suggestion I have which I would do differently is to paint with white paint or primer after the sanding step and before the red paint since red goes over white much better than gray (which required more red paint to cover over).   After the red paint was dried, I realized that I should maybe account for the white portions of the decals not having a good light background...I noticed that the white portions of the decals on my regular sized Der Red Max didn't look so great since the decals were thin and so the red made the white portions darker...you can see some of the red paint underneath.  Given this, I then painted the top 6" of the body tube with white.  Of note is that later I used a large white skull decal on one of the big red fins and it looked fine over the red background.  Kudos to Estes for making the decals very thick with excellent white coloring!

The decalling is likely one of the most difficult parts of this rocket build.  This is no surprise given the massive size of the top decal (which is one piece and wraps around the top of the body tube).  I used a dish bucket with warm water and just a bit of liquid soap (I know some people say you shouldn't, but I've done this for years with good results).  Do yourself a favor and make sure you get a large flat pan/bucket like I did for decalling.  Lay the decals in the water face down and this helps prevent them from curling up. Then pull them out of the water (don't wait too long or pull out too quickly) and check them by trying to gently slide the decal.  For the largest decal, I made sure to wet the body tube first and did a combination of lifting and gentle sliding along with re-positioning until I was happy with the placement*.  Afterwards I realized that having the seam where the launch lugs are usually makes sense, but in this case the skull and crossbones are then not aligned with anything.  Oh well. There are plenty of decals to add for those of you who are sticker-crazy and this also gives plenty of options for customization.  This is one of the things that made the MDRMax so great and it really carries through to this Mega size rocket!  To finish, I used Rustoleum Acrylic clear coat.  Rocket looks great and I got lots of compliments on it at home and at the field.  Makes me want to use it as a table centerpiece or put it on a pedestal like a work of art! :)

*EDIT:  Thinking more about the large decal, I would now suggest that you actually cut it in half (between the skulls) to make handling easier.

For the first flight, I used the manufacturer's recommended F50-6 Estes Pro Series II motor.  Flew up great with a quick boost and good event right at apogee (from what I recall).  A longer burning and bigger motor would be great for this rocket; however this first flight was quite a beautiful one.

Recovery was great under the included large red nylon parachute (beautiful chute!) which is suspended on a long wide elastic band. I used about a handful and a half of eco-fiber dog barf instead of the 12-16(!) squares of wadding recommended and it seemed to be just about right.  Rocket came down at a good speed and landed fine...construction seems very strong at the bottom of this heavy rocket.  Paint was also still very good after landing in soft plowed farm soil.

I feel this rocket is mega fantastic!  I've built quite a large collection of rockets and love many of them; however this is probably the most impressive one to me for having so many great things: design, history, following, size, materials, construction, cool factor, wow factor, general impressiveness, awesome paint & decals, fun, strength, chute, motor retainer...list goes on!.  Only issue I can think of is that due to the large fins, this rocket takes up a lot of space compared to other rockets.  Not a big deal, but something that comes up whenever I have to transport it to the field. 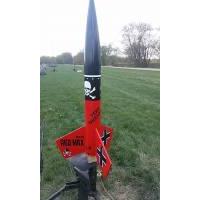