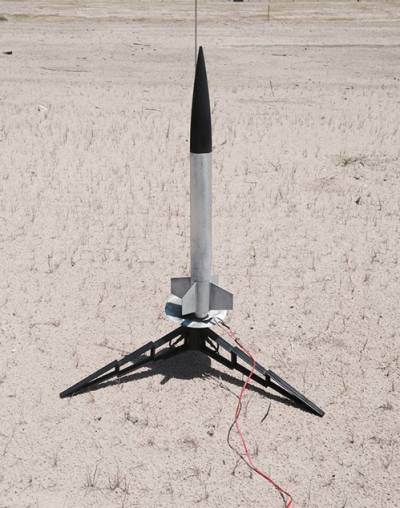 One of several ARF (Almost Ready to Fly) kits offered by Estes, the Firestorm is a great rocket for beginners as well as those looking for a quick-building craft to use at small fields. Its fins are reminiscent of a Nike sounding rocket, giving it a sturdy and utilitarian look. It can also be fitted with a booster (sold separately) to make it two-stage capable.

The kit came pre-colored and with decals already on, so no finishing is required. The components are as follows:

Construction of the Firestorm is very easy and just involves sliding on the fins, screwing on the engine cap and attaching the parachute and shock cord to the nosecone. The "aft" end of the cord is already attached to the fin can/engine mount and the launch lug (a flat, narrow strip of elongated plastic with a loop at each end) is affixed to the body.

The Firestorm is done up in a bright motif. The fin can and nosecone are made of orange and yellow swirled plastic, while the body tube is solid orange and features a decal with the rocket's name surrounded by flames. I have never cared for sport-styled decorations on rockets and decided to paint my Firestorm to resemble a realistic launch vehicle, choosing flat black for the nosecone and silver for the body. The only issue I ran into was being unable to completely cover the decal's edges. Had it been fashioned straight it may have looked similar to an access panel, but the decal was cut into a curved pattern that stuck out a bit even with several coats of paint.

While the Firestorm can be flown on B engines, I decided to use a C6-5 for its maiden launches at a decent-sized area that had been cleared for houses. Loading the engine was simple, with the cap screwing off and on easily. The rocket streaked off the pad and weathercocked gracefully, quite visible for the entire flight.

The 12-inch parachute that comes with the Firestorm is the perfect size for a fairly rapid yet safe recovery. On the second launch I overestimated the breeze that had rose up and I tilted the rod too much, which resulted in the rocket getting caught in a tree upon descent; this, however, was entirely my fault due to my error in judgement.

The Firestorm is an ideal (and well-priced) kit for the novice rocketeer who wants to start out easy or anyone who wants a quick and undemanding build. The design lets one construct fast without the need to carefully align fins or install an engine mount and launch lug. Additionally, it is also wide enough for parachute and shock cord packing to be less of a hassle than with narrower craft. The only thing I would change would be to make the decal come separate from the rocket in case one wishes to modify the look. 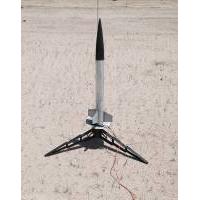 I did not get a stable flight using the Booster 60 (EST2256) containing a D12-0 with a C6-7 in the Firestorm sustainer, 7mph wind, 73F, clear day, both booster and sustainer right out of the box, first flight, no mods. My RockSim simulation shows a 1.0 calibers of stability for this configuration.

I’ve flown my similar repainted Estes Rookie several times with the Booster 60 - perfect flights every time. The Rookie is longer than the Firestorm though so that might’ve been the difference. Modding Estes RTF and ARF rockets is cheap fun - especially if you buy them from the Estes “Specials” web page or with your 40% off Hobby Lobby coupon ;-)