Brief:
When I was at the local Hobby Lobby, I saw that they were having a 1/2 price sale on all their Estes rockets. I quickly snatched up a Screamin' Mimi and waited for inspiration. A couple of days later I was watching a show on German Stukas. The sirens on the wings reminded me of the whistles on the Mimi and then I had it! Why not combine the Screamin' Mimi with one of the most classic fun-rocs Estes ever came out with: Der Red Max! Suddenly, the Screamin' Max was born!

Modifications:
I decided to take the best parts of both rockets when combining them. I liked the Mimi's length, size, and engine mount. I liked the Red Max's three fin configuration, fin size and shape, decals, and paint scheme. Therefore, I left the body tube, engine mount, and whistle tubes the same. I substituted 3/16 inch basswood for all the balsa because the Red Max fins are a little larger and a slightly different shape than the Mimi's, so I figured if I was having to cut new fins anyway I might as well make them more sturdy. By the way, I got my Red Max plans and decals off of JimZ's Rocket plans. Since the Red Max was a three finned model, I decided to go that route on the new rocket. That meant that there would be one less whistle, but I hoped that wouldn't matter much. I flipped the whistle mounting pylons around on the new model, simply because I thought they looked better. I then downloaded the decals for the Red Max and modified them with Paint Shop so that the Skulls were "screamin'" I made new decals for the name logo and "SCREAMINVERKINS" labels for the whistles. The original decals were printed with a white background, but the hobby shop where I got my decal paper was out, so I painted a white band around the top of the rocket and placed the main wrap decal over it. The rest of the decals I just left regular. 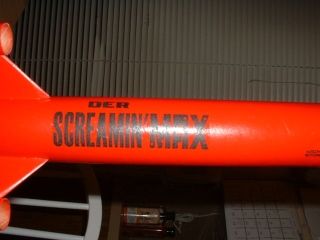 Construction:
The main components are the same as in the stock Screamin' Mimi. In the Max though, I used 3/16 inch basswood instead of the balsa provided. Also, the Max only has three fins and whistles, instead of the Mimi's four. The trickiest part was creating the custom decals, but that was more fun than difficult.

All in all, construction was very easy. I didn't really use any printed instructions, I just went with what I saw in my mind as the finished product (along with pictures from my 1977 Estes catalog of the Red Max).

Finishing:
I used Krylon red and black and Testors Decal Sealer over the decals. The decal placement was left pretty much up to the modeler on the original Red Max, so I went with that idea on the Screamin' Max. I was very pleased with the overall effect. It has a "new nostalgic" look that I really like! 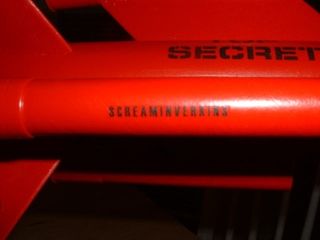 Flight:
Fly this baby with a D12-5. It's all I've used but it was perfect. Prepping the model is very easy because the body tube is large enough to comfortably hold the chute (I used the stock Mimi chute). It does require wadding and don't skimp! The motor is retained with the stock Mimi engine hook. The flight was straight and true with ejection right after apogee! I didn't need to worry about the one missing whistle as the other three were heard well after engine burnout. (I had the fourth in my pocket to use in case you couldn't hear the other three. "See, it DID whistle...No, that wasn't me!") All in all, a great flight and recovery! 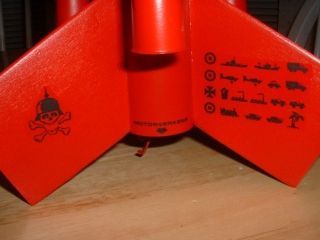 Summary:
This was a fun project that resulted in a striking model. I haven't flown it around a large group yet, but a local launch is coming up. I'm interested to see what the reaction will be. Not that it really matters, I really like it!

Other:
The most fun part of this project was modifying and creating the decals. Computers rock!