Yank just recently released their new 2" diameter line of kits and to kick it off they had a 2" IRIS as their monthly contest prize. As it turns out I won the drawing. Jason was very nice, and the kit came about 4 days later (packed nicely). I checked thoroughly to make sure there wasn't any missing parts; all parts were present so I started construction. 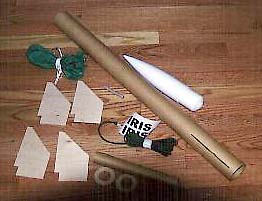 The kit is fairly simple and made of 3/16" fins, flexible phenolic tubing, a plastic nose cone, heavy duty shock cord, and a 29mm mount with 1/8" centering rings. I was a bit disappointed with one of the centering rings because one ply was peeled off on one half of the ring. However, this didn't make a difference though because it was just covered in epoxy anyway. I started construction by filling the spiral grooves in the tubes. I applied one application of filler and then sanded it down level with the rest of the tube. Filling spirals is a pain but can greatly increase the looks of your rocket. Next I assembled the motor mount. The round heavy duty cord is attached through a notch in the upper centering ring and is glued to the side of the motor tube. This seems to work well. Once the mount was dry it was installed into the airframe and secured with epoxy. As that was drying I painstakingly sand and airfoil on each fin. It was worth it though in the end. The fins were then attached through the wall of the airframe and glued directly to the motor mount. Once the fins were aligned the way I wanted them I applied generous fillets and smoothed them out with my finger. Finally I attached the cord to the nose cone and parachute.

I originally wanted to do a scale paint job but as the launch approached I realized I didn't have time. I just went with a yellow body and red nose. I decided not to apply the two included IRIS decals.

The first flight was on a F52 with a five second delay. The rocket zipped of the pad to apogee and the chute deployed properly for a beautiful flight. The second flight was on a F40-4 and the rocket was again returned without damage. The third flight on an F25 was a bit different from the previous flights. The IRIS lifted off the pad nicely, but immediately after burnout the ejection charge fired. The ejection forces broke the eyelet on the nose cone, detaching it from the rest of the rocket. The loose shrouds tangled around the chute and the IRIS came plummeting towards the unforgiving earth looking like it would lawn dart. Unexpectedly, at about 15 feet above the ground, the rocket flipped around and landed very hard on it's side. The nose cone had landed several seconds before after it free fell. Upon inspection, the only damage was a single cracked fillet and the ripped eyelet. I was impressed! I expected at least a zipper or more extensive fin damage. The rocket was repaired and flown on a G33 for another beautiful flight. Next I loaded the IRIS for the ultimate test, a G64. Again the IRIS returned ready to fly again. I decided to add motor retention after I lost my 38/240 casing in another rocket. I cut a 1/4" threaded rod and epoxied it through a hole I drilled in the aft centering ring. The motor was then secured by a nut and washer. 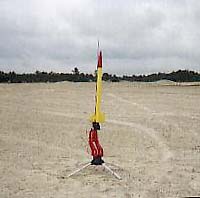 Overall this is a great rocket that's simple to build and can fly on a wide range of motors. The 2" IRIS is a durable rocket that will take a lot of beatings. It would make a good first mid-power kit.