This is a review of the OOP Estes Master's Series Space Shuttle, EST# 1284. It is a 1/162 scale replica of the Space Shuttle and includes both Orbiter and booster sections. These sections are connected at launch, boost on a single C5-3 or C6-3 engine, and separate when the 'main engine' ejects. The Orbiter uses glide recovery while the booster uses a parachute. For flight, there are removable fin units that mount in the SRBs. For display, plastic nozzles are provided.

Construction:
The Space Shuttle came packaged like a typical Estes kit (plastic bags, etc). This is definitely a skill-level-4 kit with 16 pages of detailed instructions containing 53 steps. It claims to require 4 types of glue and 6 colors of paint. The parts list includes 27 line items including the chute, decals, etc. The balsa fins, cardboard body wraps/detailing, and vacuum-molded Orbiter components are all die cut. The die cut plastic components made the Orbiter assembly a lot easier, as I never seem to get a good fit when I have to cut them with a knife. 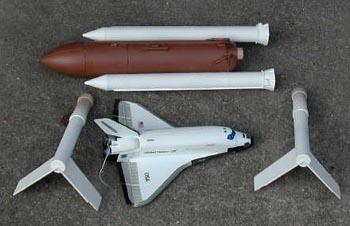 I built the kit stock, down to the elastic shock cord. I figured it was good enough for several flights, and I probably will not fly it too often. I substituted Titebond for the white glue, and since I didn't want to go out and buy 3 types of glue that I normally don't use (contact cement, plastic cement, and liquid plastic cement), I used CA (medium and thick) instead. I assembled the entire booster (main tank/SRBs) this way and it worked fine. Later, when I got to the Orbiter, which is almost all plastic, I broke down and got some liquid plastic cement. I want to point out a general rule in building models - one that I don't seem to follow. That is, read ALL the instructions before you start. I didn't pay attention and used the elastic string required for the adjustment of the Orbiter's elevons in another spot. DUH. I did, however, find a suitable replacement when building the Orbiter. My feeble mind was confused by the fact that the chute came pre-assembled, and the instructions called for a piece of twine from the chute. I followed the instructions pretty much as is, but I did skip ahead at times to keep busy while parts dried. I found one fin was broken out of the bag; however, this was easily fixed with some glue and tissue. I stopped at the point that the main tank, SRBs, and removable fin units were complete. At this point, I decided that I would separately paint each section. After these sections are assembled, it would be very difficult to paint them different colors. The fit of the plastic Orbiter parts was not perfect, but not too bad. The first step in trimming the Orbiter glider is balancing it and adjusting the nose weight. 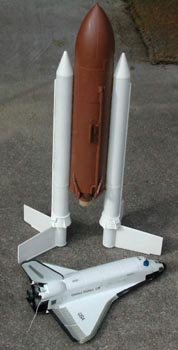 The kit provides two weights. I used one weight and some clay instead of cutting the second one up. Next, you adjust the elevons with a string that is run through the center engine nozzle in the rear. This string pulls on a plastic arm on the elevon assembly, while the elastic string mentioned earlier maintains tension. After quite a bit of adjustment, the Orbiter still seems to glide like a brick (kind of like the real thing?). If I was confident in my detailed model building abilities, I would give a construction rating of 2.5, but will give it the benefit of the doubt and bump it up a point.

Finishing:
I decided to use the current Shuttle paint scheme, with a brown main tank and white boosters. As I mentioned above, these were painted prior to their final assembly. I used white spray paint and the rest was brush-on. I didn't want to buy multiple spray paints, nor am I that skilled in masking small details. I even mixed my own light gray-green for the tip of the Orbiter's nose and the leading edge of the wings. The decals are the water-slide variety. They went on fine, but some of the smaller ones literally blew away when I sprayed the final clear coat. The end result, like many of my finish jobs, looks good from a distance.

Flight:
The kit flies on C5-3 and C6-3 engines only. I chose a C6-3 because that is what I had available. The winds were blowing between 5-10 mph (my guess) when I launched. The boost was slow (read that realistic) and there was some wobble and weathercocking. 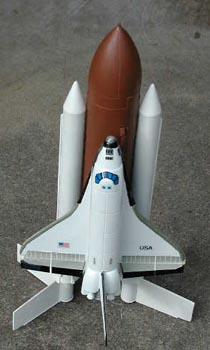 Recovery:
The recovery system is typical Estes with an elastic shock cord and a plastic chute. Ejection appeared to occur just before apogee and the Booster separated, just as it was supposed to. It turned with the wind and came down at a fairly steep angle, again, just like the real thing. It landed nicely without damage. The one problem was singeing on the elastic shock cord, which is no big surprise. I will have to replace it before the next flight - should have done it at the start! I rate the flight/recovery at 5/5, and take off ½ point for the elastic shock cord.

CONs 1. Fin stock was broken out of the package. 2. Some steps are hard to understand and require looking at all the finishing diagrams to understand what is intended 3. The fit of the Orbiter parts is so-so 4. Junky recovery components - typical Estes.