Brief:
The Liquidator is a single stage payload rocket with a unique payload section: the payload section is designed to carry up to four ounces of any type of liquid. My daughters want to shoot a goldfish into space but I think we'll try some plain water in our initial flights.

The instructions for the Estes Liquidator are typical Estes quality, clear and easy to follow. The engine mount is constructed and then mounted inside of the fin can. One potential gotcha is the engine block for this rocket is huge and must fit completely inside of the engine mount tube or the assembly will not fit properly in the can halves. I sanded the block thoroughly so it slid easily inside the engine mount tube before gluing. Since this block is so long, I think it would be a snap to modify this rocket to fit a larger E size engine. By cutting off an inch of the block tube and then securing the block inside the mount tube would allow the E to fit properly. Since an innocent fish's life may hang in the balance, I assembled the rocket for just a D size motor. 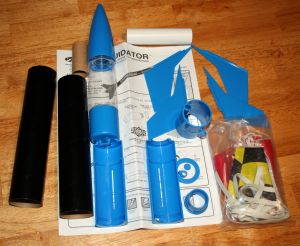 The rest of the assembly is typical E2X: mount the can assembly into one of the body tubes and then attach the fins and the bottom launch lug. Read the instructions carefully on this step. The launch lug is designed to fit just one way but could be mounted incorrectly if you don't look at the instruction illustration. Once the bottom half is assembled, the two body tubes are joined using a plastic tube coupler. The tube coupler has a launch lug attached and it must be aligned with the bottom launch lug before gluing.

Once the body tubes are assembled, the payload section is fitted to the top to complete the assembly.

PROs: Very easy to assembly for the most part. Parts are of high quality.

CONs: Engine block has to be sanded thoroughly to fit properly. Shock cord may be difficult to replace.

Finishing:
Since this is an E2X kit, no painting is required, There are two stick on decals that attach to each of the body tubes. Since I really hate stick on decals, I took care in placing the stickers to the rocket. The rocket looks very sharp and the blue and black color scheme looks great.

The payload section holds four liquid ounces and for the initial flights, bottled water was used. The nose cone screwed tightly to the payload section and no leakage occurred. Once loaded with liquid this bird is heavy! The rocket weighs 5.7 ounces empty and the water adds another 4.2 ounces of weight bring the total to near ten ounces.

For the first flights I used D12-5 engines on all three flights. The engines are secured with one of the twist-on end caps Estes uses with many of their E2X kits. Dog barf was used for protecting the parachutes. Flight day was sunny and there was very little wind.

A D12-3 motor may be a better fit for this rocket than the D12-5, eliminating some of that delay as the rocket falls straight down to the earth. Even with the longer delay, the rocket had enough time for the parachutes to deploy and recover cleanly.

The next two flights were mirrors of the first: straight up and clean deployments, landing fairly close to the pad. 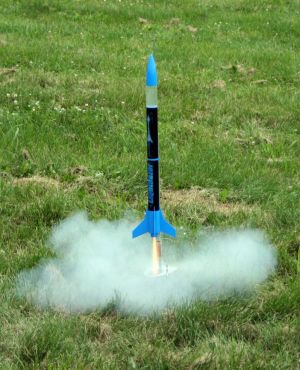 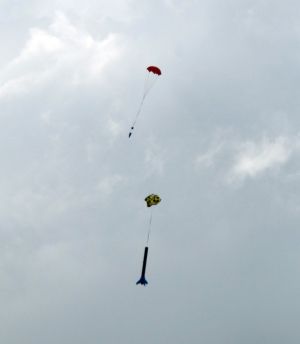 Summary:
The Estes Liquidator does what it claims to do. It lifts four ounces of water into 'space' and allows for a great recovery. While this rocket will never break any altitude records for flight, it does fly straight and true on its recommended motors. The payload section is designed nicely, holding its liquid cargo intact through both flight and recovery.

The Estes Liquidator is listed as a skill level 1 kit, but I have to agree with Michael on it being an E2X.