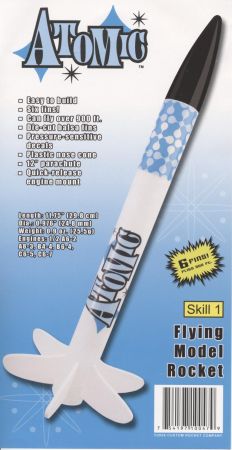 Brief:
The Custom Rocket Atomic, kit #10047, is a single stage, six fin, plastic nosecone rocket with a 12" parachute recovery and a 24" long by 1/4" wide elastic shock cord. The rocket is a new offering from Custom Rockets for 2009. The suggested paint scheme is all white with a black nosecone. Decals are of the pressure sensitive type. The rocket stands 11.75" tall with a body tube of 0.976" in diameter. The fins are of balsa with the nosecone being black molded plastic. It employs a metal rocket motor retainer clip and uses 18mm rocket motors (Standard A, B, & C motors).

Construction:
The kit comes with a single 0.976" diameter body tube. The six balsa fins are die-cut. The nosecone comes in two pieces. The second piece is glued to the bottom and is the attachment point for the 12" parachute and 24" shock cord, and both pieces are molded black plastic. It has the standard 18mm motor mount consisting of an 18mm motor tube, two cardboard centering rings, a metal clip, and a cardboard engine block to be glued at the end of the tube. It comes with a 12" plastic parachute that needs to be assembled. The shock cord is a 24" long by 1/4" wide length of elastic cord that is attached to the body with the usual tri-fold method. I've built two of these so far and the balsa fins were slightly rough cut from the die (wood crushed instead of being cut by the die) in the first kit and needed to be filled and sanded on the edge to make them smooth. The second kit had fins that needed no work to prepare them and were in good shape. I seem to get a slight reaction of the plastic nosecone to the paint if the nosecone is painted. The body tube was excellent with no spiral grooves to fill in--it was smooth. The kit is sold in a plastic hang bag that allows you to see the contents.

The instructions were easy to follow, logical, and complete. The fin template for the six fins is simply a diagram on the sheet where you stand the tube vertically on it and then mark off the point where the fins would go. I prefer one where you wrap it around the tube, but this is the way Custom provides for the fin locations in this kit. There is nothing special about attaching the fins or launch lug to the body tube. The balsa is thick enough to use either carpenters glue or super glue gel. I used super glue gel that is rubberized to be more impact resistant on the fins and launch lug. I bought the glue at Wal-Mart and it's made by Loctite. I'm sure it's available in other stores. For the fin fillets, I used carpenters glue. There is not much room between the fins where it attaches to the body tube, but it's workable when making the fillets. The fit of the nosecone was OK. I've noticed that sometimes with the two piece nosecone the bottom cap is a little wider than the nosecone and has to be sanded flush. As for the parachute, the single length of string must be cut into three pieces and attached to the parachute by tying a knot. The hole you make for the string is reinforced by tape disks that you apply to the plastic parachute material before tying the string to the parachute. It was an easy build with no surprises in the construction. Although the construction is straightforward, the shock cord in my opinion is too thick and too short. I used a 3 foot length of 1/8" elastic cord I bought at Wal-Mart in the craft/sewing department. For tools, you'll need a hobby knife, sandpaper, masking tape, pencil, emery board, toothpick (to apply glue), glue, black and white paint--and clear paint if you want to clear coat it after applying the decals. I bought the carpenters glue and sandpaper by Testors from a hobby shop, The super glue, toothpicks, emery board, elastic and knife I bought at Wal-Mart. I bought the paint at Ace Hardware, and it's the Ace brand.

Finishing:
The plastic nosecone seems to slightly react with the paint. I've used different brands with the Custom Rockets molded plastic nosecones and they all seem to slightly ripple when applied. I have no fix for this yet. I've tried to prime it with latex paint, but that doesn't help. What I've done so far is to gently sand the paint between coats and if you recoat it enough times it eventually gets smooth again. After about 45 minutes I can gently sand it and then recoat before the required 1 hour recoat deadline suggested by the paint manufacturer. The clear coat paint seems to want to slightly bead or dimple on the decals, but lays smooth on the flat texture of the decal. The slight beading or dimpling appears to be only on the glossy areas of the decal. It's important to wait long enough between recoating the paint. Mostly, if you don't recoat within the hour, you have to wait about a week before you can recoat it again. If you have a thick coat of paint, it'll take longer for it to dry enough so that the earlier layer of paint will not wrinkle. There is nothing worse than giving the rocket a second coat and watching the whole thing wrinkle up. As for the tri-fold shock cord mount, make sure its far enough inside the body tube so that the nosecone can slide in. Too far to the top and the nosecone will not slide in all the way. The decals are on a single sheet and must be cut apart before being used. I'm giving this a 3.5 rating because some kits have the fins cut more roughly and will need more work before you can even think of gluing them to the rocket. 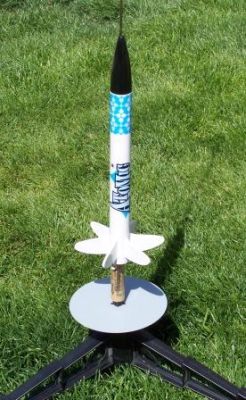 Flight:
I've used only A8-3 motors with this rocket. For me it flies good enough with this motor. It flew nice, straight, and stable. My first flight went with no problems. The second flight had a problem with the nosecone getting tangled with the parachute shroud lines, but even though it landed a little fast, it was OK. The third flight went well except for the parachute ejection; the shroud lines got stuck on the motor retaining clip and the rocket landed hard enough to break one fin off. I've since fixed it. I thought the recovery or descent time was OK with the parachute, but the field where I fly is large and I don't have to worry about trees. I put about 4 squares of Estes wadding into the rocket. As stated previously, the rocket uses a metal motor retaining clip so no friction fit of the rocket motor is required.

Recovery:
The shock cord appears to be too big if the 1/4" size is used and too short for a length. I always replace it with a 3 foot long 1/8" wide length of elastic. The 12" parachute was adequate to allow for a soft landing with no damage. Other Custom Rockets built on the same body tube have used 12" parachutes with no problems. Where I fly there is lots of room for recovery, people with a small area for recovery may want to cut a spill hole in the parachute, use a smaller motor, or perhaps convert to a streamer recovery such as the Fiesta rocket by Custom Rockets. You may also want to read the review and flight logs for the Fiesta to see what experiences other people have had with using a streamer instead of a parachute with a rocket of this size since they are similar (Fiesta has three fins, Atomic has six fins). As for attaching the shock cord to the rocket body, some people may want to use a Kevlar® thread attached to the motor mount with elastic tied to the end of the Kevlar® instead of the tri-fold method. The 12" parachute is fine for me but how you fly it is determined by the recovery field conditions. I also used a fishing snap swivel to attach the parachute to the nosecone of the rocket. It allows the parachute to spin and not twist up the parachute shroud lines. The rocket is easy to prepare for flight with no surprises. The two important modifications would be the longer shock cord and adding the fishing snap swivel, both are easy modifications to do and would make the rocket more flight worthy.

Summary:
I like the rocket. It's an easy build, looks great, flies well, and is affordable. I would replace the shock cord and add a fishing swivel to the parachute to make it more flight worthy. Both elastic and fishing snap swivel are available from Wal-Mart, but they are so common I'm sure you can find them in most department stores. The rocket has a simple paint scheme to make the finishing easy. That is important because if you have to repair a fin, the all white paint scheme is a plus.