Brief:
The Madcow Army Hawk is a mid-powered 1:5.4 scale version of the actual surface-to-air guided missile. The Hawk features a balsa boat tail, Nomex chute protector, vinyl decal, Kevlar shock cord, and 30" nylon parachute recovery. Skill level wasn't mentioned, but I'd place this at a skill level 2 for its size and the need for epoxy in construction. 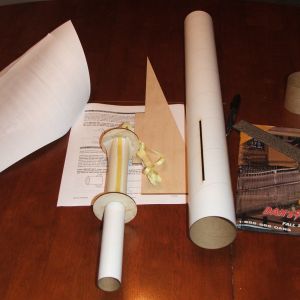 I dry-fit all of the parts before I started the build, and was pleased to see that everything seemed to line up just as it would when it was time for the actual construction. It was the actual construction part that had me nervous, since I rarely venture into the realm of mid-power. My occasions to use epoxy are scarce, and when I do use it, I wind up with a mess on my hands, feet, goatee, etc. (I don't even like to think about the etc. part.)

That said, almost everything about this build went smoothly. I didn't wind up with too much of an epoxy mess, except for one occasion when a fillet refused to cure, causing me to have to go back and start over. The instructions were well explained and adequately illustrated if one has previous building experience and I found myself finished with the basic construction almost too quickly. With the exception of paint and nose weight, everything looked like the illustration and all of the parts fit together seamlessly.

Finishing:
Finishing was as easy as the rest of the project. The body tube had only the slightest spiral, and there was very little grain showing in the plywood fins. These were eliminated with the last of my thinned Elmer's Fill 'n' Finish. The balsa nose and tail cones were treated to several coats of FnF and came out looking great after several sandings. Once the rocket was smooth enough, I primed it with Valspar white primer, then sprayed the fins with Valspar Gloss Black. I ran into a little trouble masking off the fins because of the monster fin fillets that I had created, but it isn't easily noticed unless you're holding the rocket. After two coats of gloss black, the fins looked great and I masked them off before painting the rest of the rocket with several coats of Valspar Gloss White. When this dried I installed the vinyl decal as shown on the instruction sheet. This was the first vinyl decal I'd ever tried and I was impressed with how well it held its place once it was applied. The finished product looks great: squat, bulky and sturdy. My kind of rocket.

Flight:
Like many people, I found myself choosing my motor based on the what was available when I visited our on-field vendor, Merlin Missiles. Not owning an RMS system and not willing to chance borrowing someone else's, I went with the Aerotech G38FJ-7--a choice that I was assured would be great for this rocket. Once I got it home, I installed it in the motor tube and figured out how much nose weight to install to bring the CG up to the proscribed 20.75" from the tip of the nose. In the end, that wound up being almost all of it. 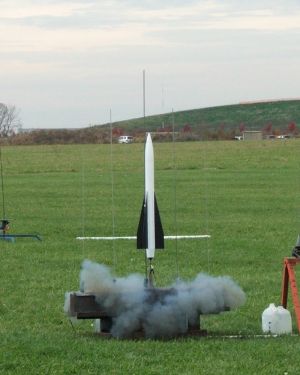 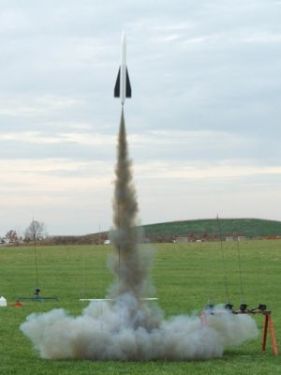 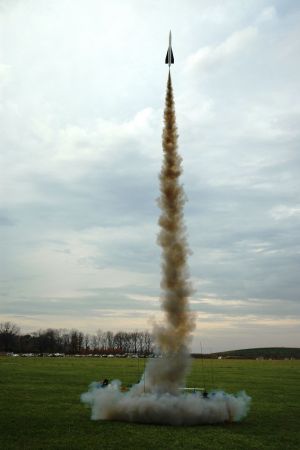 With Christmas season fast approaching and a personal health crisis on the horizon, I managed only one flight with this bird before the end of my flying season. However, that flight definitely won't be the last. Launch day was gray and overcast with a constant breeze. Since this was going to be only my third flight using an Aerotech motor and my first since 2002, I was a little nervous about the impending flight. Luckily the VOA field was crowded with people to whom a flight like this is almost as natural as drawing a breath. Fellow QUARKer Mark "Loopy" VanLuvender helped out immensely and kept me from a full blown panic attack. I had an idea of how to proceed but having someone to confirm that what I was doing was correct made all the difference in the world. Once the motor was secured and the ignitor in place, things got rolling quickly, and after loading the rocket on the pad and getting the obligatory pictures, the launch followed quickly. I managed to catch the whole process with the burst mode on my camera, even though I've never had the slightest bit of luck timing Copperhead ignitions. The Hawk rose fairly quickly and followed an almost arrow straight flight path up to the point of motor burnout. It weathercocked some during the coast phase due to the large surface area of the fins, but for the most part, everything occurred just over the flight line.

Recovery:
At ejection, the rocket had taken a nose-down attitude, but even with a fairly violent jerk, there was no damage. The 30" nylon parachute brought the rocket down softly about 100 yards into the uncut overgrowth. It spread itself out nicely over the vegetation, making for an easy recovery walk. The Kevlar shock cord looked as fresh as when I installed it and the marks on the Nomex sheet told me that it had done its job. 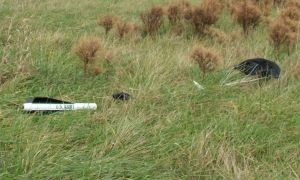 Summary:
PROs: High quality parts--especially the balsa nose and tail cones in a kit of this size. Ease of construction (aside from a personal difficulty with epoxy that I have no one but myself to blame). Madcow now makes a Jayhawk kit. (Can you say Father's Day present?)

CONs: The price seems hefty, but when you consider what you get with a kit of this size, it seems about right.