Brief:
The Super Sprite is an upscale of the old Estes Astron Sprite. It is a stubby rocket that features a ring fin, body tube sized for 24mm motors and uses parachute recovery instead of the tumble recovery of the original.

Construction:
Other reviews have covered this and I have nothing to add except that the quality was first rate.

The instruction were easy to follow and the illustration were logical and applied well to the steps but were sometimes difficult to see. The reproduction process was not the greatest.

The instructions start with assembling the motor mount. Marks are made at the appropriate points for the centering rings. I assumed that I would have to cut the slot for the motor hook myself so I just started marking. After I made the marks, I noticed that the slit had already been cut and I had marked the wrong end. I drew Xs through my marks and started again. The centering rings went into place at the marks and I glued them in place with Elmer's carpenter's clue.

A piece of Kevlar® was provided and I was instructed to tie a loop in one end and then use that loop to form a slip knot around the tube. A drop of CA was used to secure the knot and then the end of the Kevlar® was fed through the hole in the forward centering ring. It was then fed back through the tube to get it out of the way and the assembly was set aside to dry.

The next step instructed me to fill in and seal the fins and nose cone. I left the nose cone for later but decided to try a new idea I had read about for the fins. I ordered some Rollataq photo adhesive (I think I got this idea from a web site called "ninefinger") and the Rollataq applicator. On receiving the the adhesive and the applicator, I found that the applicator itself had come with some adhesive and that I probably have a lifetime supply. I hope I like this method!

I decided that I did not want to fill the applicator with the adhesive. That way lies the realm of gummed up wheels etc. Instead, I applied a bit to one side of the fin, spread it around with my finger and then applied a piece of typing paper. The adhesive looks like Elmer's white glue but smells different. The instructions say I have about 3-5 minutes of working time. Judging by my results, I used way too much and should have settled for putting very little on. After applying the paper, I used the applicator (dry) to press down and smooth out the paper. I believe this is called burnishing. When it seemed dry enough (about 20 minutes for the amount I used) I used an X-acto to cut away the excess paper. I then repeated the procedure on the opposite side and allowed everything to dry overnight. Be sparing with this adhesive! I used too much but found that I could rub the excess with my fingers before it completely dried and get it up. Again, it acted like Elmer's white glue in terms on cleanup, if not adhesion.

Without giving it enough thought before hand, I decided to round the leading and trailing edges of the fins. I forgot that each fin has an outer part that will have to be glued along the leading edge. Fortunately, I noticed in time to limit the damage. I marked where the intersection of the inner and outer part of the fins are and only sanded up to that point. I did not sand the trailing edge at all.

I wondered how well thin fins would sand with the paper laminated to the surface and it wasn't too bad. I did lift a little bit of one sheet but it was easily glued back down.

The kit came with a wrap around tube to mark the proper lines for both the wings and the lug. It was accurate and the positions were marked. I decided to implement another idea I had read about and pierced a series of small holes in the root edge of the fins and the fin line on the BT. This was so that the glue can form rivets. It was easily done with a safety pin and time will tell if it was worth the small increase in time/effort.

Before mounting the fins, the motor mount assembly was slid into place. Hawks Hobby even provided the swab with which to do this. CLASS ACT! Everything fit snugly but not too tightly. After filleting the centering rings, I was ready to mount the fins.

This part is just your basic mounting of fins to a 3FNC airframe. I already mentioned making holes for the glue rivets. The only other non-standard thing I did was to use the Art Rose fin jig. I have liked it in the past but in this case, the sweep of the fins made rotating the rocket impractical. Still, I like using it and it makes for more even fillets.

After drying from the previous step, the ring fin is slipped over the inner fins. The instructions warn that it can be a very tight fit but in my case, it seemed to be perfect. The ring is not glued into place at this point. Instead, the outer fins are put into place and everything adjusted for fit. When the ring is properly adjusted, the outer fins are glued to the corresponding surfaces on the inner fins. I used CA for this. It meant that the job went relatively quickly with a minimum of fuss. Only after the outer fins are in place is it time to secure the ring. This is done with fillets of yellow glue.

Finishing:
The nose cone was first quality and was sealed with Elmer's Fill 'n Seal. The body tube was tightly wound and could have gotten by without any filling but I touched up a few places. The same goop was used to fair the glue fillets where shrinkage had caused unevenness.

The main body tube, as mentioned, did not need much in the way of filling. The ring fin was another matter. It had a deep and wide spiral making just over one complete revolution over the length of the ring. I decided to use it rather than fight it and left it as it was since it has sharply defined boundaries.

The scheme I decided on was to leave the body and interior of the ring white and paint the nosecone purple. I was then going to paint the inner (larger) part of the two fins opposite the launch lug in the same purple. The outer parts of those fins was to be red. On the third fin, I reversed this scheme with red on the inside and purple on the outside. On the ring, I planed to use the spiral as a natural divider and paint one side red and the other purple.

After sanding the nose cone and a few rough areas on the fillets, I gave the rocket a dusting with white primer. I quickly decided that it was too cold for such foolhardy activities and delayed any further painting until the next day. That didn't work out so well either with the cold drizzle but I tried anyway in a covered porch. I gave it a couple of more primer coats over the course of the day and tried to figure out how to tell my wife about the strange new disease the plants have come down with...

After the primer #600 wet/dry sandpaper was used wet to clean things up a bit. After that, the body was sprayed gloss white.

I brushed purple on the nosecone and was very pleased with the way it turned out. The fins and ring were harder. Masking within the ring is difficult. To make matters harder, I discovered that the spirals on the ring were not as I had imagined. No matter which part I chose to start as purple, 360 degrees of revolution would not match up in the end. I decided to go with it anyway and have the pattern at the odd fin a little different. I painted the purple and then started on the red. Because of some seepage at the roots of the fins, I remasked to paint a narrow wedge on either side of the fins. That actually looked good until I tried to take it too far and widen the wedge coming out of the red fin. It actually turned out better that I expected, considering the artist.

The decals did not amount to much. There is a big black dot and a Hawk's Hobby logo. I applied the dot near the top in the middle of the red chevron. I did so for reasons of symmetry but it was not an inspired choice since it does not show up well against the red. I placed the logo on the opposite side between the fins. They are simple and would certainly do more for the model when pained in the simpler, default scheme. Even so, I think they add a bit to mine as well. 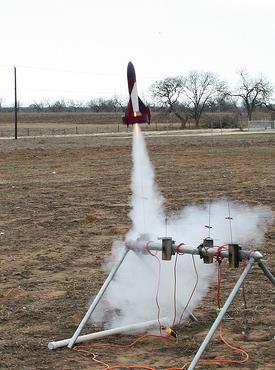 Prepping this rocket was easy. Since I think this one is going to be a keeper, I installed a 9x9 piece of Nomex®. After that, it was just a matter of inserting the motor and igniter and then hooking it up.

I didn't have my sheet with me and mis-remembered the Estes E9-4 being recommended. As it turns out, a 6 second delay was recommended but the 4 was what was used.

It took off from the pad straight as an arrow. The chute deployed at apogee and it drifted gently down. It was a perfect flight.

The second flight was almost as good. I used another E9-4 and it took off perfectly again. I think the 4 second delay is a good one for this model especially when you build heavy like I tend to do. It deployed at apogee and came down safely under the chute but I could tell there was a problem. The chute did not open into a beautiful canopy like the first time. Instead, it seemed to be a partially open canopy. Inspection revealed that one of the shrouds had gotten tangled in the swivel and the Nomex® rode up the shrouds a bit. It still came back fine.

I would have added the half point to the 5 I already gave it for flight but that's not allowed.