Brief:
I received this as a Christmas present from Hawks Hobby. The Snooper really takes me back to my early days of rocketry, and Hawks' upscale has excellently reproduced this rocket with lots of upgrades to go with the larger size. This is their latest version with through-the-wall basswood fins and is one huge, fantastic rocket. It flies on 24mm motors and recovers by parachute. A spacer is included in the motor mount kit to allow the use of either Estes D or E motors. The rocket stands 35 ½ inches tall and has a fin span of 13 ½ inches!

Construction:
The first thing you'll notice is the kit is jam packed with a ton of high-quality parts. Also, all of the small parts are contained in plastic bags, which I greatly appreciate. A Fin/Pod Marking Guide is included to assure proper alignment of those items. The instructions are very straightforward and include lots of helpful illustrations. Although the normal "dread" with the Snooper is making those three card stock transitions, the larger size of the Hawks Snooper makes this much easier. Follow their helpful illustrated instructions and I think you'll be surprised at how well these will come out. Mine are the best I've ever done. An ST-16 is used for the main tube, a 29mm heavy-duty motor mount tube is used for the upper airframe, and ST-8 is used for the pod tubes. An internal heavy-duty 29mm tube is also used to house the motor mount and then centered inside the lower airframe with the centering rings attached to align with the fin slots and support the card stock shrouds. I filled the grain in the nose cones (all seven of them!), fins and transitions, and the seams in all of the tubes with Elmer's Fill ‘n' Finish. The nose cone and transition are very nice balsa, except the shoulder of the transition in my kit was way too short. I recommended to Loretta to use a longer shoulder in future kits. The fins are basswood and laser cut which also makes for a much sturdier rocket than the balsa used in the earlier kits. The "radiator" fins at the rear are still balsa, but that is actually helpful by keeping weight down. The 24mm motor mount fits the longer Estes "E" motor. The centering rings used to support the card stock transitions and to center the internal tube are all laser-cut light-ply, and the motor mount kit includes a 3.75" engine hook. A Kevlar®/3/8" elastic shock cord combo is included, along with a big 3/16" launch lug, a hefty eye screw, and some really nice waterslide decals. The enlarged decals match the original perfectly and are exceptionally reproduced. The shock cord was super long as I modified the way it is installed. The instructions indicate to attach the Kevlar® cord to the motor mount and then attaching the elastic cord to a loop at the end. I used my standard tri-fold shock cord attachment to allow inspection of the shock cord. I do love it though when the manufacturer puts Kevlar® in the kit! The pre-assembled, 30" rip-stop nylon parachute that is included is an excellent plus, too, and exhibits the same level of quality as the rest of the kit--top notch!

I pre-sanded and prepped all of the parts before starting construction, which is my usual routine. That way I am sure to have sanded any attachment points and minimize any sanding in tight places that might otherwise be required in the final finishing steps. Similarly, after making the card stock shrouds, I sanded those to a smooth finish. After gluing the pod cones to the pod tubes, I also prepped those to fill the joints and sanded them for a smooth transition between the cones and tubes. Except for having to cut the fin slots, aligning the motor mount centering rings with the fin slots, and the alignment of the centering rings for the shrouds and launch lug, construction of the rocket is pretty straightforward. I read through those sections of the instructions several times and test fitted everything to make sure I knew how it all fit together. Also, don't do too much sanding on the radiator fins since they need to fit seamlessly at the attachment points on the three shrouds. I used yellow glue for all of the construction except I smoothed in JB-Weld for the fillets on the three main fins due to the slope of the transition. Using the "double-glue" joint method makes attaching the pods and outer fins a lot easier to manage. The double-glue joint attaches must faster so the parts are much less likely to "un-align" while drying. As is usual on any rocket I build, I installed a length of Kevlar®, which was provided, in a paper shock cord attachment (not provided) with a loop at the end to attach the elastic shock cord. To minimize abrasion from the Kevlar® against the body tube, I soaked in CA around the top 1/2" of the body tube and tied a knot in the Kevlar® to meet the lip of the body tube. As I noted earlier, the parachute is already assembled and it has small grommets holding the shroud lines. It's a very nice parachute!

The instructions note the position of the CG and explain how to modify the rocket to add variable weights to the nose cone depending upon motor use. Supplies for this modification are not included. Hawks suggests installing an eye screw in the upper nose cone that may be removed and then weights added as necessary. I used a length of all-thread instead with nuts and locking washers. That way, the all-thread can be permanently glued in, which works better in my opinion. Removing and re-installing the eye screw will eventually wallow out the hole, which could cause the weights to drop down into the tube upon the force of take-off.

Finishing:
As I noted earlier, all of the pre-finishing was done up front before anything was installed. Only a light coat of filler was used on the fins as the basswood was very smooth after sanding with 400 grit sandpaper. Due to the paint scheme I chose, I painted the radiator fins separately and then added them after painting the rest of the model. Be sure to mask off where they will attach to assure a good bond. The finish is from the front cover of the 1966 Estes Product Catalog. I used this same paint scheme on a regular size model that was entered into the DARS Annual Fall Classic contest, and it won first place! I'm hoping to be able to enter this one into this year's contest in the "Open" category. I sprayed the entire model with a light coat of Kilz to seal off the glue and provide a solid base coat. Next, I lightly sanded the entire model with 240 grit sandpaper and then sprayed on a coat of primer. Next, sand and primer and sand and primer again, sanding with 400 grit sandpaper. Painting the rocket with this paint scheme takes a lot of masking and waiting for paint to dry before masking and painting the next set of colors. Paints used were Krylon for the yellow and blue, Valspar's Restoration Series Allis-Chalmers orange, and Rustoleum's Metallic silver. I initially used Rustoleum's Bright Metallic silver but something went wrong there, and I had to strip it off and repaint. It just never dried. After putting on masking tape to paint the orange after three days of drying, the paint lifted or there were impressions of the tape after removal. Anyways, after drying for a couple of days after repainting I applied the decals. The decals went on much easier and laid down much better than I anticipated. The main decal is fairly big for waterslide! It went on easily enough though and looks fantastic! I didn't install the "1 2 3" fin decals due to the paint scheme I chose. Once complete, I put on a thick coat of Future Floor Finish to protect everything. 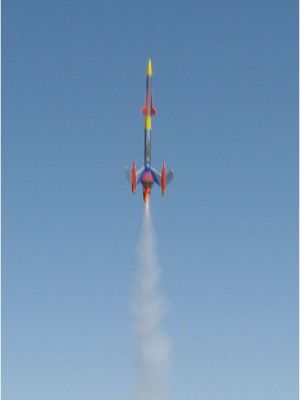 Flight:
My first flight was on an Estes E9-6. The face card indicates to use the Estes E9-4, but the winds were really light so I decided to use the 6 second delay. That may have been a mistake. The up part was fantastic, straight, and true.

Recovery:
Ejection didn't occur until after the rocket was heading down and when the parachute came out it got caught up in one of the fins. The ground was pretty soft so not much damage occurred, although one of the pod tube/outer fins broke off on landing. There were also some cracks in the paint along a couple of the fin joints. George Sprague, a fellow DARS member suggested putting on a round key holder around the shroud lines to allow the parachute to open slower. Good idea! Too bad he didn't suggest that before I sent it up. I've since fixed everything and touched up the paint. Hopefully it will still be nice enough to win the contest! 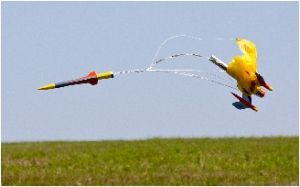 Summary:
The Super Mars Snooper is a fantastic rocket. It is hugely impressive on the launch pad and beautiful in flight. The through-the-wall basswood fins are solid and are much better than the previous surface mounted balsa fins. Recovery on the large, 30-inch rip-stop nylon chute is a big plus for a soft landing with the big fins. When you consider that the kit has seven balsa nose cones, a huge balsa transition, and a big nylon parachute, the pricing is excellent. I highly recommend this kit.