Brief:
Shrox Industria was a mail order only company that sold an impressive line of futuristic model rockets. That said, during it's all too brief stint of availability, the Shrox Icarus was one of the closest things I found to the glory days of model rocketry when both Estes and Centuri (and Canaroc to a smaller, but no less inspired extent) could be counted on to produce several imaginative futuristic style rockets per catalog. The Icarus would have fit in well alongside such classics as the Estes Andromeda and U.S.S. Atlantis, Centuri's Taurus and Skylab and any of Canaroc's Star Fleet series. If you're like me, a BAR whose glory days fell in the late '70's/early '80's, it's quite possible that you'll look at this kit and think that this is how it should still be. 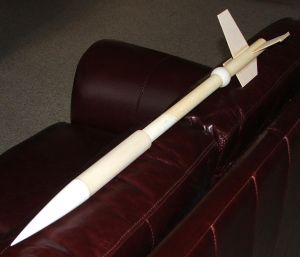 Considering what you wind up with, the Icarus is a surprisingly simple build. The fins aren't pre-cut, which is cool as they shouldn't be, and are to be cut out of basswood, which is also cool because it makes finishing easier. The instructions are nicely illustrated and very clearly written, making the rocket a fairly easy skill level 2 build, but one that took me over three years to complete. The long wait for completion wasn't due to any defect in the design of the rocket, but more because I was chicken. I had the fins cut out and ready to go the day I opened the bag, and I was cruising along on the construction until I got to the ping pong ball. His designs alone prove that Shrox deserves to be mentioned in the same breath as the designers of the classic Estes and Centuri kits, but the addition of the ping pong ball as an integral part of the design is what he's likely to be remembered for most of all. (Well, at least by me.) Incorporating the ping pong ball into the design, while brilliant, caused me no end of headaches, cost me a small fortune in ping pong balls, and was a huge part of the story behind why I took almost four years to finish the Icarus. In theory, it's quite simple. Draw the outline of the BT-20 onto one side of the ball, cut the circle out with a hobby knife, then slide the tube into the ball, trace it on the other side and duplicate the previous cut. In no particular order, I either A) had the ball fly across the room while I attempted to make the first cut, B) slipped and gouged the ball while making the first cut, C) got the first hole right then misjudged the placement of the second hole, D) got the holes aligned right but made the cuts so sloppily that I had to start over, E) smashed the ball out of general frustration, etc, etc, etc. My wife was endlessly amused by the growing mound of ping pong ball corpses that began to accumulate in the garbage, and I was beginning to feel like a moron (I don't need the help), so I moved on to other projects. I pulled the Icarus out several times a year after that, eventually getting a ball to at least look passable after being heavily filleted, but my enthusiasm for the project waned. One by one I eventually assembled and attached the fins until inspiration returned in early December of 2005. I attached the remaining fins and parts in a marathon session, then primed, filled, and sanded the suddenly recognizable carcass before my muse disappeared again. 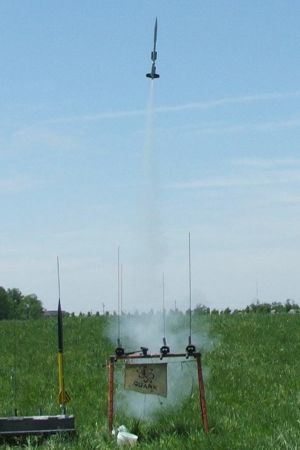 Finishing:
Finishing wasn't too terrible a task because of the basswood and the single color paint scheme. Sealing was done using thinned Elmer's Fill 'n' Finish, and after sanding, the entire rocket was sprayed with Valspar white primer. I made sure to coat the inside of the "Bussard Collector" tube well because I wanted to spray the inside with a florescent orange To give the impression that all of the Bussards that had been collected were aflame. After getting the proper coverage with the florescent paint, I masked off the area with strips of masking tape and sprayed the rest of the rocket with Valspar Gloss Gull Gray. The gray paint makes the orange stand out nicely, and the overall effect is pretty sharp. Once the paint was up to snuff, then came the part I was dreading: the decals. Quite honestly, the decals were among the two best I've ever worked with. (The Rokitflite Odyssey was the other kits whose decals rocked.) Like the Odyssey, the decals for the Icarus really pushed the kit into the realm of the 5.5 rating (if possible) in both looks and ease of application. Man, I miss Shrox.

Flight:
Since the Icarus finished out as a fairly heavy bird, I chose to go with a C6-3 for the first flight. Despite the extra weight, the Icarus had no problem getting off the rod, and from my vantage point left of the pad, the day-glo orange of the inside of the "Bussard Collector" was clearly visible through most of the flight (as I had hoped it would be). The rocket windcocked immediately upon leaving the rod, but the large fin area had me expecting this. Ejection occurred right at apogee and since I had overcompensated greatly on the shock cord, it initially looked like a separation. After a moment it became apparent that everything had worked as hoped and the rocket was going to make it close with the road like every other rocket I fly at VOA. In the end it managed to miss the road (by less than ten feet) and was recovered without a scratch. 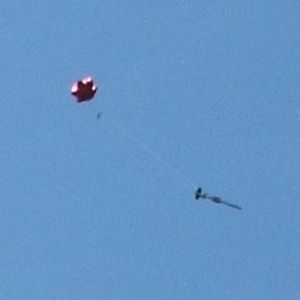 For flight #2 I chose a C6-5 with the hope that the extra delay might keep it from drifting in the stiff breeze. Like the first flight the Icarus cocked into the wind as soon as it cleared the rod, only more severely. The C6-5 allowed the ejection to come just as the rocket tipped past apogee and once again I had to wait an agonizing few seconds before it truly cleared the access road and settled softly in the weeds.

Recovery:
Since I started this project back before I was personally acquainted with the joys of Kevlar®, the Icarus used the folded paper shock cord mount that was included with the kit. I did overcompensate by using in upwards of four feet of sewing elastic, which gave the initial impression of a separation on the first flight. As it was, the recovery system, which included a small nylon parachute, performed perfectly. 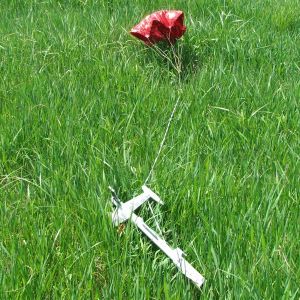 Summary:
PROs: The Icarus is an awesome looking bird even without the decals but is truly incredible with them. This one should be high on Shrox's list to re-kit (or at least sell the plans as part of a plan pack. I'd buy one.)