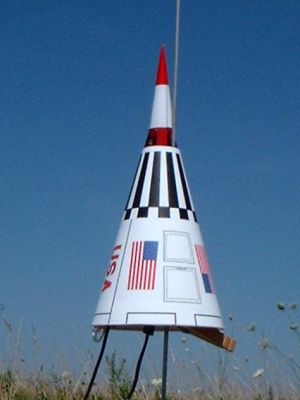 Brief:
The 1969 Centuri classic has been brought back to life by Semroc. Introduced at NARAM-48 as a special commemorative edition, you can now only pick up the standard version for a bargain $7.50. This odd-roc design features cone stability (although there are 6 fins used for support), and the shroud serves as its own parachute.

The instructions are clearly written and well illustrated. Given the very unusual nature of this rocket, you'd do well to pay close attention to them. I've built a number of paper rockets and boat tails, so I had no problems at all with this and wrapped up the construction in about an hour. After talking to a few club regulars though, their general opinion (and in many cases recollection of the original) is that this would probably not be a good choice for a first shroud/cone project. because of the nuances of forming and sizing the cone properly (plus applying a shroud sticker), I'd rate this somewhere between a 2 and 3 on a 5-scale for difficulty.

Construction begins with sanding down the fins then tacking them onto the BT-20 motor tube. Since the fins are mostly covered by the shroud, there's no point in filling grains or going for a super finish when just a light sanding will do. Also, pay careful attention to marking the fin lines on the tube. There are two vent holes pre-punched and you don't want the fins too close to the holes. The fin guide printed in the instructions is fine (I cheated and used the Estes marking tool and caught the hole/alignment issue just in time).

You'll bond the nose cone in place for this guy. The nose cone is mostly exposed so it would be a good candidate for careful sanding and grain filling.

At this point, the instructions suggest painting the subassembly, which is a heck of a lot easier than trying to mask and paint after the shroud is on. The notes call for painting the lower portion of the nose and motor tube white and the upper nose portion red. I looked at the illustration on the header card, which had a red nose, red tube, and black fins and thought that looked like a better idea. Since there's a sticker to decorate most of the nose, I painted the whole subassembly red, then hand painted the upper portion of the fins gloss black. No masking, nice and easy.

With the subassembly done, you now move on to the shroud. Shroud construction is straightforward: cut it out, roll it gently to form it while being careful not to wrinkle it, and then glue it using an overlap tab. It always drives me nuts that when shroud patterns are printed, there are no notes whether you should cut inside, outside, or on the line. That might seem like a minor trivial matter, but in this case the distinction has two very important impacts: it affects the finished appearance (either you get a thick black seam line or you don't) and it also affects the fit. For this kit, my strong recommendation is to cut the shroud patterns out just inside the black marking lines.

To avoid an obvious seam on shrouds rather than glue using the overlap/glue tab, cut the tab off--or better yet, cut a slightly wider one from spare stock. Mark a line down the center of the strip, then glue one end of the shroud to the tab lined up on the centerline. After this has dried, glue the other edge butting up against the first edge. This way the two seams are even, not one raised over the other.

The base of the cone needs a little structural help to handle the thrust forces. This comes in the form of a cardstock stiffener ring assembly. This is sort of like a centering ring glued to a coupler, both parts made from cardstock. There are also a couple of notched cutouts you need to make for attaching the shock cord.

To wrap up construction, simply put a little glue on the fins and slide the cone over the nose cone until it fits snugly over the fin braces. I'd suggest white glue, as it doesn't shrink or discolor.

Finishing:
The main cone/shroud is preprinted in color. I've got to say, the quality of the color and printing was outstanding! I'll bet they could print these out for a third of what they're paying now, but I've got to say the look and feel was amazing. It was the best I've seen in any cardstock/paper reproduction.

There's really no "finishing" to this other than the subassembly painting. There is though, one little tricky decal to apply. There's a preprinted peel 'n' stick shroud pattern designed to wrap around the lower portion of the nose cone. It's challenging to get the fit and alignment just right, especially since it's very tacky and doesn't lend itself to peeling off and reworking. I must have gone a little heavy on the paint, as my pattern had to sit up about 1/32" forward of the nose/tube seam.

Flight:
There are lots of warnings about this being, at best, marginally stable. The instructions warn to use a B4-2 or B6-2 for first flight and suggest that a C6-3 may be too long a delay and/or unstable. It is also suggested to fly on a calm day.

What the heck... This is an inexpensive, mostly paper rocket, so I had no qualms trying it out on a fairly breezy (10-12 mph) day. I did at least cautiously go for a B4-2 though and waited until the crowd of 50-60 cub scouts and parents had left the field.

The flight prep is a bit different for this rocket. The shock cord is anchored to the bottom of the cone and on the other end you attach a plastic ring. The plastic ring goes over the back end of the motor (taping it on is a good idea). The idea is that at ejection, the motor kicks out and flops around underneath the descending rocket. It acts as tail weight to keep the cone oriented fat-end down so the cone serves as a chute of sorts.

Make sure you also note the tip in the instructions to use a clothes pin or tape to start this about a foot up on the rod, well away from the blast deflector. You definitely don't want flames kicking back up and igniting the cone as it takes off.

Despite the heavy wind, my Point flew perfectly straight and made a very amusing whooshing noise as it chugged to about 150 feet. No stability problems whatsoever.

Recovery:
The motor kicked as intended, however, I think the wind was a little much and the descent was almost sideways with the nose pointing downwind as it tumbled gently down. Despite its cone shape, the 2 second delay was a bit late and ejection came as it had already turned over.

I recovered everything just fine and it will survive for another flight. I did notice one slight burn mark, so I am not sure how many flights I'll get out of this.

Summary:
PROs: Very cool design that certainly triggered a lot of nostalgic comments from the older flyers in my club (I was only 4 when it first came out). It flies fine and is a quick, easy build. The kit has exceptional printing quality.

CONs: It's probably not a rugged, durable flyer.

I've got to disagree that it won't be a durable flyer. My original Centuri Point had dozens of flights on it and the only thing that ever broke was the shock cord. After that, I flew it and just let the motor eject. The cone shape slowed it down enough that it landed with no damage. I liked it because I could fly it in the back yard without danger of losing it. I happened to mention at a family gathering that I wondered what ever happened to it and my brother told me that he took it and flew it often in the back yard.

Chan's review is dead-on. As always, the quality of Semroc's parts is outstanding. I agree that this is a bit more than the Skill Level 1 advertised -- probably more like a 2.

I have the original Centuri Point, built in 1970 and still on active flight status today. I've flown mine several times (recently) with the C6-3; flies stable but the extra 5 N/S impulse will cause the cardstock airframe to nearly buckle under the aerodynamic forces during acceleration. After that last C6-3 flight, I'd figured I'll just let it fly with the B4-2 or B6-2 for now on (until I get the SEMROC kit, then I can finally retire the Centuri kit after 36 years of faithful service!). Oh yes, The Point has been excellent for use in the Open Spot Landing event at NAR Sanctioned contests (and draws good attention!).

My first buying/building experience with Semroc is 100% positive. I fully concur with the high rating the review gave The Point. As this was my (and my son's) first paper shroud rocket, I would rate it as a solid skill level 3 due to the precise shroud work required. Semroc, with their superb product, clear instructions, made in USA product, and quick shipping has earned my repeat business.