Construction:
Kit consists of two (2) body tubes (similar to Estes') of different lengths. Plastic nose cone and mylar chute which is bright blue. The eight (8) fins are made from balsa wood. The engine mounts are standard "D" engine size mounts with metal hooks. The centering rings are stiff cardboard and are laser cut. The shock cord is elastic and the kit comes with quick change swivels. There is a parachute platform inside near the top for the chute to rest on. There is no pay load section.

This was my first Launch Pad kit and I was favorably impressed with it. It is very similar to the dozens of Estes kits I have made. The instructions were adequate for everyone except maybe the very beginner. There are 16 steps on the 3 pages of instructions. There is no parts list.

The only thing you really need to watch out for is that this kit has no information on mounting the launch lugs. They are included in the kit but its up to you to know where they go. I forgot until after I had painted the model to put them on. I had to sand off the paint and then glue them on. I put the shorter lug at the bottom of the rocket and the long one about an inch aft of the CG.

Everything fit together very nice. I had a little trouble removing the tube couplers which are shipped inside the body tubes. There is such a small difference in dimensions that the coupler must be pulled evenly out or they will get stuck. And regarding the couplers, there was one step that is confusing. The step says that the engine mount must be exactly 1.5" from the bottom end of the body tube and to use a tube coupler to set this distance. Unfortunately my coupler was 1.75" long so I assume it wasn't suppose to stick out from the bottom of the rocket so I cut down the coupler to 1.5" and then glued it in. Since the two engines are recessed 1.5" inside the body, I would think the body could get burnt a little when the engines fire. I have never seen an rocket with engines this far in.

I used yellow glue for everything with no problems. On the fins I used super glue per the instructions to strengthen the wood. The wood is soft! Just laying the rocket on its fins during assembly caused the wood to compress at the tips! Placing the 8 fins would have been easier if a fin template for the body tube was available. Instead it is up to the builder to somehow mark 4 lines on the body for the 8 fins. The fins have to be cut out from scratch from the balsa sheets. Two paper templates need to be cut out and traced on the wood. There is enough wood to comfortably make the 8 fins.

The kit had a couple of things that, although small, made the kit a little easier to put together...the shock cord mount and engine hook tabs were already cut out and ready to use. The parachute too was already cut to size. There is a parachute platform that needs to be glued 5" from the top of the body tube. Not real easy to do but the concern is the picture of the platform didn't match the part I had. The picture shows a disc with about 9 little holes drill near the outer edge. Mine had just one big hole on the center.

All put together this rocket seems rather strong even though it is only 9 ozs empty.

Finishing:
Like most of the TLP kits there is no decals but a picture showing color scheme and markings of the real model. I used regular Kyron paint on my model. I haven't gotten tape yet so no pin stripping has been done.

Flight:
The recommended motors are two (2) D12-5's or E15-7's. Recovery wadding is needed but the amount needed is not mention. The motor mounts use standard Estes style engine hooks. 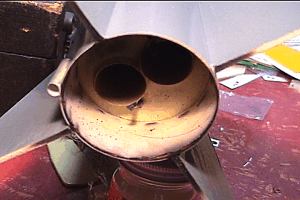 First flight was with a pair of D12-5's. Since the instructions don't say, I guessed at about 12 sheets of Estes wadding. The weather was nice and sunny but with variable winds 5 to 10 mph. At lift-off, the rocket noticeably weathercocked into the wind. So, I guess this rocket isn't as unstable as some of the other Launch Pad kits. My rocket weighed in at 8 oz. empty and hit about 700' as a guess. The 5 second delay was perfect and the bright blue mylar chute made for a very good descent and easy recovery on the ground. The flashy mylar was easy to spot on the ground from quite a distance. 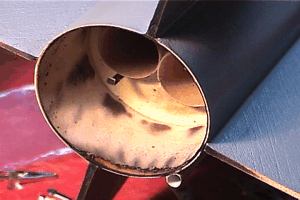 This flight did highlight a concern I had about the engines being recessed 1.5" inside the body tube. The inside edge of the body tube, from the edge up to .25" was burnt or charred. During construction you place that tube coupler into the bottom end of the body tube to protect it from the flames and to strengthen the tube. But with just one flight the coupler was burnt completely away in places, exposing the body tube. Also, the bottoms of all 4 fins were seared. I had used a 1.5" spacer to lift the rocket off the blast deflector. Perhaps a taller spacer would help with some of this. I can't imagine what E15's would do.

Recovery:
The shock cord is elastic band fashion to a shock cord anchor just like all the Estes rockets used to be. The other end of the shock cord goes to a swivel. From the swivel to the nose cone is a 10" long string. I worry about having just a little string holding my nose cone to the rocket! We'll see the first time I fly it if I lose it! The 18" mylar chute has a swivel which can be quickly attached to the shock cord swivel for flight. From past experience an 18" chute should bring this rocket down okay if not a bit fast considering that it weighs about 11.5 ozs with engines.

Overall it was exciting to see this "D" engine cluster rocket take off and land. Since the common problems, broken fins, tangled chute, broken shock cords, etc. didn't happen, I would rate the overall recovery at 4/5.

Summary:
Pros: The parts are good quality and fit together nicely. The plastic nose cone was the best quality I have seen. The cute and shock cord mounts already cut out. The Launch Pad is probably the only company making this and many other scale model rocket kits. If you are used to Estes and you want to move up to something bigger which can take "E" engines or if you are looking for a two (2) engine "D" or "E" rocket, this is probably the only one out there. Cons: No instructions on launch lug placement. Coupler insertion at back of body tube not clear. Wood seems soft but able to work if super glued to strengthen. The nose cone is attached to the rocket with a 10" piece of thin string. There is no tube marking guide for the fins.

UPDATE 6/01 - On the 5th flight, the string holding the nose cone to the shock cord broke and the nc fell to the ground. Luckily the rocket and nose cone were not damaged. I replaced the string with very thin Kevlar®string (as I did for the other TLP rockets I have) and I don't expect this to happen again. Regarding the burning inside of the tube near the engines, it has progressed and more has been burnt but after 5 flights the rocket outer body tube is still OK and the rocket still flyable.

I generally agree with the review. This was my second TLP kit and aside from having to re-work the nose cone (it had a lot of pock marks) I follwed the instructions and the finished product looks great. The one thing to think about are the fins. Even after using the CA method of coating the fins referenced by the TLP, the fins are the weak point on this rocket. I've broken upper and lower fins just transporting this to the launch site. If you have this kit in your build pile. Do yourself a big favor and just replace the flimsy fin material with stronger stock. This is a big rocket and this thing hits the ground with a thump when it lands. The stronger the fins the better.

Ihave built several TLP kits, and enjoy them all. When I built my AMRAAM, I used a nose cone from Apogee Components, the kit nose was to round at the tip. I used basswood for the fins, and moved the motors aft about 1 inch. And since I used 4 motors instead of 2, I had to add nose weight. But it fly's great, and I haven't had any burning of the body tube. This is a great kit, and I plan to add a couple more.