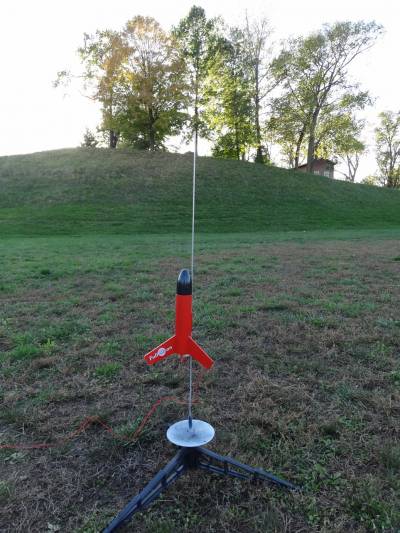 Picked up as an afterthought back in the days when Quest products were still available in local retail outlets, the Full Moon languished in my kit storage cabinet for several years before catching my eye one cold winter night when I was in the mood to build something quick.  The Full Moon seems to me to be the Quest version of the Baby Bertha, a kit that I've got a long and loving history with.

I'd like to be able to comment on the instructions, but this is one of those kits that build instinctively if you have a few rockets under your belt.  My wife occasionally goes through spurts of movie watching thanks to trips to the local library.  On the nights that she invites me to sit in, I've found that it pays to have something to do in the event that the movie is a stinker.  These are movies that others have donated to the library, so I've done a pretty fair amount of rocket construction on these nights.  As is the norm, the movie was forgettable, but I paid attention to the rocket construction.  A 3fnc rocket to the core, the Full Moon builds quickly and easily, making it a perfect starter for kids.  Parts are typical Quest, with the thin centering rings and Kevlar shock cord.  The rings I can do without.  The Kevlar is one of the great things about building a Quest bird. Thin feel aside, the rings do work as expected, but they impart a cheap feel to anyone accustomed to building Estes or Semroc birds such as myself, although I've admittedly never seen one fail.

First flight for the Full Moon was on my 51st birthday.  I had invited my niece and nephew along to watch, but after waiting a half hour I realized I'd been ditched.  Apparently they'd been interested until they got out of the car at home and found the neighborhood awash with kids, then it was "Uncle who?"  Never one to miss an opportunity to fly, even alone, I soldiered on.  The Full Moon flew on an A8-3 for the first flight, which wasn't the greatest choice, nor was it the worst.  The Full Moon is smaller than the Estes Baby Bertha, which provides "I can throw it that high" flights on an A8-3, so the same motor in the Full Moon is a pretty decent performer.  It left the pad with some authority, windcocked lightly into the breeze, and topped out around the 200' mark.  As it turned out, the windcocking was a good thing since the recovery took it all the way across the field to the base of the treeline.  Twenty feet further and we'd have been getting into the tree limbs, wires and US 27, none of which have been kind to my flying circus over the years.

The second flight came a bit over a month later, and this time I went with the B6-4.  The Baby Bertha size rockets perform well at B6-4 Field on the B6-4, so I expected much the same out of the Full Moon.  I got that and more.  After another perfect liftoff the Moon windcocked slightly, just as it had on the first flight.  The B6-4 flight was double the height of the A8-3, which was to be expected.  What I hadn't expected were the winds when the rocket got out from behind the protection of the big hill to the west.  The windcock became more pronounced and the Moon ejected just as it tipped over.  It immediately caught a breeze and started racing across the field, clearly bent on beating the drift record from the first flight.  I could only watch in horror as it drifted toward the trees, obviously too high up to recover if it would get stuck.  Somehow it threaded the needle between the two trees, missed the wire, and landed in the middle of the far lane on US 27.  Three cars went by before I could manage to trot to the rescue, and I was apparently living lucky that day because none of them hit the rocket despite it being in the area where the tires would generally pass.  I could only shake my head in wonder.

For the third flight the Full Moon served as my wind test bird.  It had been prepped for flight on a previous outing, so all I had to do was attach the clips and let it fly.  I knew better.  Had I taken the time to unfurl the parachute things wouldn't have occurred the way they did, but the problems for this flight were all on me.  The breeze was fairly steady, but I neglected to angle the launch rod to account for this.  The Full Moon flew on a B6-4 and windcocked badly, but also went fairly high.  It ejected just as it tipped over, still over the ballfield, a bad sign when the winds are up.  The rocket was saved from a likely trip into the trees by the parachute that failed to unfurl.  As it was it came quite close to the trees.  Had the chute functioned properly I'd probably have been visiting it the following spring.  I had failed to unfurl the chute before the flight, so for a change my poor range habits worked to my advantage. 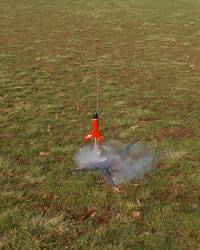 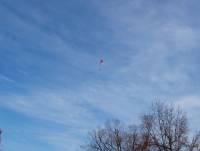 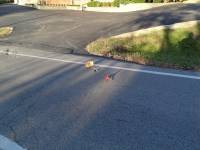 Cons: OOP, but there are a lot of them still in the sales pipeline. 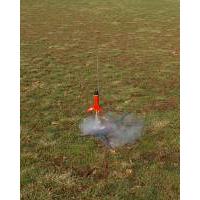 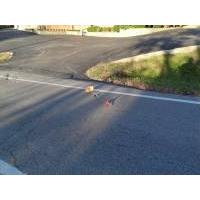 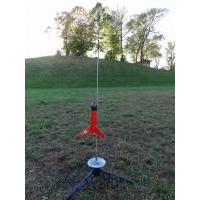 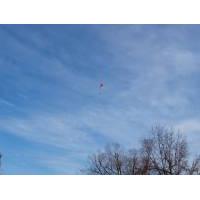