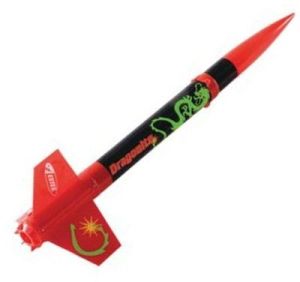 Brief:
The Dragonite is a simple, EX2 rocket with an equally simple 3FNC design. It requires only the simplest of assembly and recovers under a 12" chute.

I bought this kit for my step-son hoping to get him interested in rocketry. He was 15 at the time and chose this one because he liked the color scheme. The rocket is long gone now and I am doing this review from memory because I was requested to do so. The only artwork I have is a photo taken from eBay.

Construction:
The parts are all pre-colored. They consist of a black body tube, orange fin can/motor mount, slide on launch lugs (one of which doubles as a shock cord mount), approximately 5 inches of elastic shock cord, plastic nose cone, 12" parachute kit, plastic motor retainer ring, and a sticker sheet.

I wanted my step-son to read the instructions, but he did as I feared and just looked at the picture to slap the thing together. Fortunately, it was difficult to mess up too badly.

The body tube slides onto the fin can and is secured with model cement. Two plastic rings slide over the body tube and need to be aligned. The launch lugs are molded into the rings. The upper one also has a slit intended to secure the shock cord. According to the design, the shock cord passes through a slit in the upper part of the body tube and then through the slit in the upper plastic ring. It is then knotted to keep it from coming out. This is done instead of the standard Estes tri-fold. The shock cord is then to be tied to the nosecone and the parachute attached as usual in these models.

I made some modifications. The shock cord was only about 5" long. I don't know if it was planned this way or if I got a defective kit. Bobby put it together as designed but I pulled out the cord, replaced it with a piece about 14" long and mounted it with a tri-fold mount.

Finishing:
The finishing involved applying the stickers. The main one was a large body wrap. It wrinkled as it was applied but not too badly. With that, it was ready.

CONs: stickers give you just one chance to get it right

We chose an A8-3 for the first flight. The motor just slips into the fin can and then the retainer ring is inserted and given a twist to lock it in. The rocket took off straight and then arced over right at apogee. Everything deployed as planned and the rocket recovered fine.

The second flight used a B6-4. It was a textbook flight right until ejection. At that point, the body tube separated from the fin can instead of the nosecone from the body tube. Everything plunged to earth but there was no real damage. I decided to repair it by simply cementing the body tube back in place.

The final flight of the Dragonite was about a month later. This time we loaded a C6-5. It was a repeat of the second flight in all details except that the upper section lawn darted and was not worth repairing this time. A check showed that the cement bond had broken again and that the chute was packed too tightly.

CONs: crashes well after BT separates from fin can. If I had to build another of these, I would use epoxy instead of the recommended model cement.

Recovery:
As described above, the shock cord and its attachment stink. If I really wanted to hold onto one of these models for a while, I would find a way to run a piece of Kevlar® from the fin can and then connect that to a piece of elastic.

Recovering as a "blow-nose"/tumble is hard on the rocket.

Summary:
This could be a nice entry level rocket for a beginner if it was a little better thought out. It does look nice...right until it crashes again.