A modification of a cheap bad rocket into a cheap good rocket.

I couldn't resist it. There it was sitting on the shelf at Hobby Lobby, with a clearance price tag. I thought long and hard. This rocket had a bad reputation, Styrofoam. It had replaced all of the balsa wood in the original kit. The reviews were bad and the owner was trying to unload the remaining inventory because it was a dog. I thought some more and then placed my $1.25 on the counter and walked out with a genuine Edsel of the model rocket world, a Fun Rockets Wicked Winnie.

After I got it home and summoned the courage to open the box and take a look at the kit, there it was, Styrofoam boat tail, Styrofoam fins, Styrofoam bulkhead and Styrofoam nose cone. It wasn't pretty. It sat on my workbench for a couple of weeks while I thought on how best to use the rocket, should I part it out, should I build it stock, what should I do?

I finally decided to build it as stock as possible. I only paid a buck and a quarter for the kit, it was practically a disposable rocket at that price. The first attempt at installing the fins was a disaster. They don't fit. I thought about sanding them but the Styrofoam looked like it could handle one launch and then crack on landing. At this point I deviated from my original thought and decided to modify the rocket to make it useable. The goal at this point was to make the minimum modifications to the rocket, but also to have a fully functional rocket. 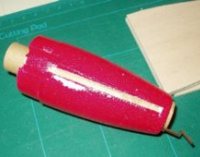 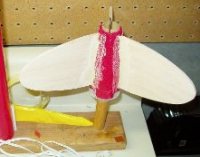 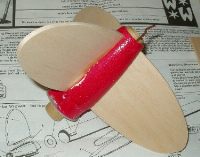 Then the next problem reared it's ugly head. I decided to paint the fin unit before installing it in the rest of the rocket since the balsa fins are the only thing on this rocket that are not painted. I pulled out the trusty Krylon primer, and started to cover the fins and boat tail in gray paint. But wait, what was that sound that I was hearing. Faint cries of "I'm Melllltiiiing!" echoed throughout the yard. I looked at the once smooth surface of the boat tail slowly shriveling away. What to do now? Was all that work in vain? It was time to fall back and regroup. Obviously the Styrofoam did not like the solvents in the Krylon primer, I should have tested it on a spare fin, but in my haste I skipped the compatibility test. There was only one thing left to do, coat the entire boat tail with Fill-n-Finish so that none of the Styrofoam would see the primer and paint again. After several coats of the fill-n-finish, I approached the primer with fear and trepidation. Fortunately the coating held and the fin section was finished with a semi-gloss black paint.

Finally I found a gap in the hectic pace of the summer that also had a lack of wind, and took my recovery crew out to the local football field to launch Winnie and a couple of the other birds that I had managed to slap together this summer.

First flight was on a B6-4. It was a fairly slow liftoff, and the parachute ejected just after apogee. The parachute gave a good rate of descent and the nose cone popped off and floated down separately. Note to self: tape the nose cone on, and put on a bigger parachute if there is a payload in the rocket.

The second flight was on a C6-5. This was an easy choice at this point since the other rockets had all broken fins off at landing. The flight was great, nice and high with the ejection at apogee. Again the nose cone popped off and floated back separately. Note to self again: Tape the outside of the nose cone, not the shoulder on the inside since the Styrofoam compresses, thus rendering the extra tape useless.

The stock out-of-the-box Wicked Winnie is a dog. However with the addition of the balsa fins and taping the nose cone on (I will probably tape or glue the bulkhead in as well) this is a cheap good payload rocket. I didn't take the time to shape the fins but that would only help the flight characteristics of this rocket. As these are seen at clearance prices, this is a really cheap way to get a larger low power payload rocket.