Construction is extremely easy. This is how it goes:

That's really all there is to it. The launch lug is already attached when you buy it along with the shock cord being mounted. The fins are a solid piece with the fin can halves.

The illustrations in the instructions are the typical Estes fare and are more than adequate for a build of this simplicity. There was a step included for removing any excess plastic flashing before gluing the two fin can halves together but this was not necessary on my kit since there wasn't any excess flashing. 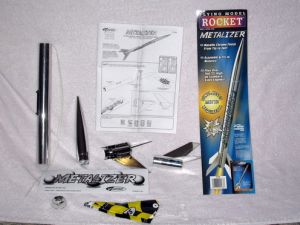 CON: Not much challenge if you are looking for one

Finishing:
The finish for the entire model is a chrome-like plastic from the tip of the nose cone to the trailing edge of the fins. The body tube itself is covered in a reflective silver single piece wrap.

The decal is a self-adhesive sticker, printed to match the style of the rocket. The one problem I had was that the cutting on the edges of the decal went entirely through the backing and separating the decal from the underlying paper was troublesome at first.

Something that I had never seen before was a decal that was included which listed all the recommended motors. The instructions suggested placing it near the bottom of the rocket as an easy reference for what motors to use. Very handy! 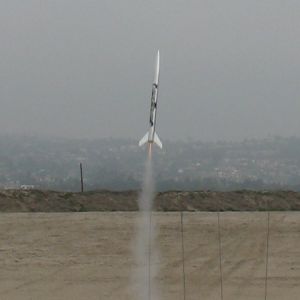 Flight:
Flight for this rocket is very straightforward. The motor retention is via a screw-on cap which goes on over the motor. The flier inserts the motor, screws on the cap, then inserts the igniter and plug. Nothing more required.

Wadding is required, and the chute (being plastic) needs to be packed carefully and inspected carefully before each flight to ensure that all of the shroud lines are properly secured.

As for the manufacturer's recommended motors, 4 are listed, but I can only recommend 2. The A8-3 had quite a few people at my club nervous about recovery. It only flew to about 100 feet, and the ejection charge went off at around 30 feet. It was very underpowered on this motor. The B4-4 was also recommended, but failed to get much altitude as well. Of the other two motors, the C6-5 was nearly perfect, although the delay was a bit too long. But of the motors recommended, it flew the best on the C6-5.

Recovery:
The shock cord in use is the new Estes "rubber band" style cord and is pre-mounted inside the body tube. While this makes assembly easy, it also makes it harder to replace should the cord become damaged during the life of the rocket.

The supplied chute was more than adequate to bring the rocket down safely, even when one of the shroud lines pulled loose.

Summary:
PRO: Very flashy, very easy to build, prep, and fly. Good kit for someone who wants to feel that they've assembled their own rocket but isn't ready for something more challenging.

CON: Recommended motor list needs to be revised to eliminate the A8-3.

I agree with the above review. I Built this rocket with my God son and the only changes I made were to add a longer shock cord and I also went with a streamer made from plastic police tape instead of the parachute. All flights so far have been on B6-4 motors and all flights have been straight up with recoveries not far from the pad. The shiny finish makes tracking this rocket very easy. This is a great kit that is simple to build and is a lot of rocket for the money.

I built the Metalizer as a small rocket to do some wind tests before the larger rockets are flown. I am impressed with the quality here. Very easy to construct. It is the easiest EX2 that I have assembled. It is a pretty rocket and I flies straight on B's and C's. One of my better flying and looking rockets.

I agree with the earlier opinions. I like this rocket for a few reasons. One, it's a larger size compared to other low power rockets (Alpha, Viking etc). Two, the silver color makes it easy to see. Three, it's a good flier. I've used only C6-5 motors so far, and the ejection always seems to be just after the apogee. It is becoming a favorite of mine to fly. The rocket is also very easy to construct. I think the only tip would be to check the shock cord for damage before flights.

I totally agree with the other comments.  This rocket is a quick build and a great flier!  I built it in an afternoon with a five-year old boy, and we flew it later that afternoon. We used each of the three recommended enginesm and each flight was perfect.  The Estes standard two-piece engine/fin module makes this rocket both robust, and simple to fly.  The bright silver finish looks great, and definitely makes it easy to track.  I highly recommend this rocket as a quick, simple, reliable, good-looking and great-flying introduction to rocket construction for a small child.