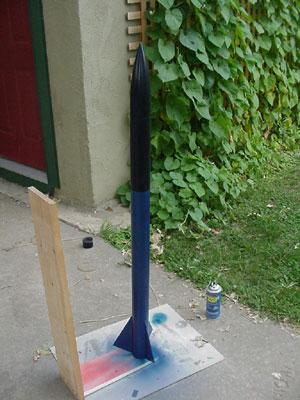 Brief:
Well, at first this started out as a modification to tie my friends LOC Vulcanite H76 for max motor power. When I look back at it, it was a pretty stupid idea. Not only is anything over a H waaaaay too powerful for this, but I have to use an adapter every flight. I also added pencam.

Modifications:
The pencam mount is simply a coupler with two bulkheads mounted on each end. The assembly is mounted in the payload section of your rocket, which has a hole cut the exact size of your pencam (mine is the Aiptek 1.3Mb SD). I then mounted the camera facing down with a custom made shroud made out of aluminium screwed to the payload section. There is an extra screw that goes from the outside of the payload through the couple to keep the entire assembly from rotating. I also added a small piece of foam on the bottom bulkhead so the camera has padding to prevent damage during acceleration. At launch I turn on the camera to start filming (it has 11 minutes of video with a 128mb SD card), then take strapping tape and put one wrap around the payload and camera. Finally, I screw the shroud on and launch the rocket.

Construction:
It's just your basic LOC Starburst with a single 38mm mount instead of the dual 24mm mounts. Here is a list of the small modifications:

The Construction of the Starburst itself was nothing special, just your standard LOC Kit: high quality, strong, and very stable. The only problem was the elastic shock cord, which I replaced (as you should do with ALL of your mid/high power rockets). 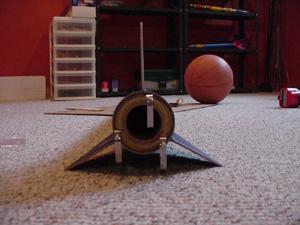 The quality of the LOC kit was outstanding, as usual. No damaged body tubes or anything out of the ordinary. The instructions are LOC type (the back page of the picture of the kit), but I did not use them (not that it would have done much good, it was pretty much all about the 2 motor tubes). All parts fitted together with minimal sanding, and all seemed top quality. Painting was a breeze using automotive paints. The only gripe I have with LOC is that they did not extend the fins to reach the motor tube, because the fin tabs are very small. This could become a problem in the future with large thrusts, but this rocket is light enough that I am scared to launch it on a 'H', much less a 'J'.

Flight:
I was afraid of not getting enough speed on a G80, so I loaded up a H128 at Tripoli Quad Cities. I had no problem with the LCO to set up the camera and launch first. The rocket flew a little off due to the uneven drag of the shroud but it was pretty stable. The rocket landed and I got video, which you can download at my web site, off the SD card. Being consumed with need to put a big motor in it on the very same day, I loaded up a H268R. The rocket kicked off the pad super fast--I wouldnt be surprised it if broke mach, arched over, still coming down, still coming down.....!@#$%%!!! It landed on a soft dirt field about 300 feet away from the pads. The entire payload section was buried, and the camera was TOTALLY destroyed. However when I looked in the camera, I saw that the SD card was still intact!!! I am in the process of getting a new camera now so I will be able to see crash footage. The booster section of the rocket is in pretty good shape, only one small kink between the centering rings, but everything 3in forward of the centering rings will need to be replaced. Upon inspection, we concluded that the motor failed because of a combination of things: not enough ejection powder (although I had the same as the H128), too tight of a fit for the coupler, and very, very high thrust crushing everything down (including payload). 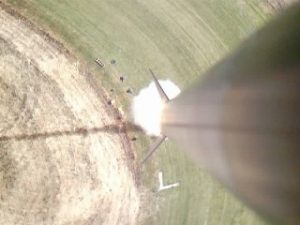 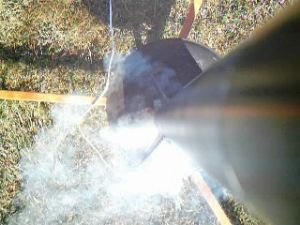 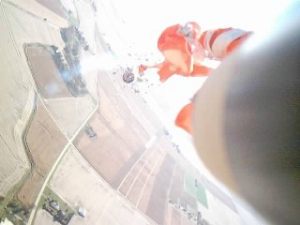 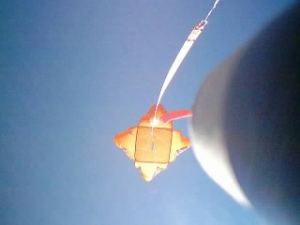 Summary:
PROs: Cheap, instant gratification for your work, and some sweet pictures/video!!

CONs: Always pack more ejection than you think you need...