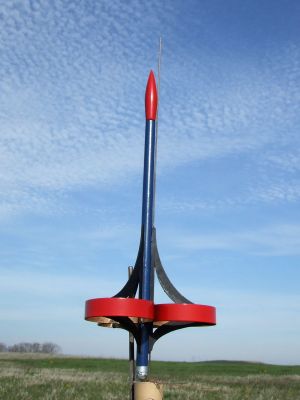 Brief:
This is a sweet little micro-sized design based on the larger Borealis} (though it's not a pure downscale, as this is a much simpler design). It's another great addition to the Quest Micromaxx motors. Featuring tube fins and a custom nose cone, this is an eye-catching futuristic design that's just heavy enough that you can track the flight without snapping your neck.

Construction:
If you're relatively new to Micromaxx rocketry, you might experience a little sticker shock when first glancing through the FlisKits line, and at $8.65 retail this one is right in line with his other MTTM kits. You'll appreciate the value though once you open the bag and start building this kit. What you've essentially got is the same basic mixture of parts and same amount of work as a regular LPR kit, just smaller. In this case, the little baggy contained the following parts, all very good quality: 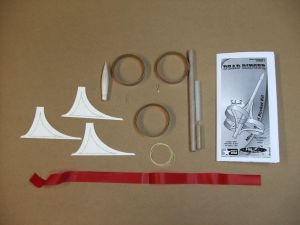 This is rated a skill level 2 overall, and I'd tend to agree with that. Overall, I had about 40 minutes into total construction excluding finishing, although this was while working on another kit concurrently. The instructions are well written and feature computer-drawn illustrations, fitting on one side of an 8.5" x 11" sheet of paper.

The first step is to bond the launch lug into the lower body tube. It's a bit of a loose fit so apply a generous bead of glue. To aid in alignment, I let the glue set for a couple minutes that slid the upper body tube over the exposed portion of the launch lug and rolled the whole thing on a flat surface a few times. I let the completed assembly dry for a good 20 minutes while working on other steps/kits.

Next, take the 3 tube fins and tack them together. Since the glossy tube finish is a lousy bond surface, lightly sand it first. I applied a drop of CA to each joint and set on a flat surface to dry.

With the ring fins in place, you're ready to attach the upper body tube. First, tie a couple knots in one end of the Kevlar® thread shock cord and slip it through the body tube. Next, slide the body tube down the launch lug (with a drop of glue applied first), wedging the shock cord in place and resting against the ring fins. 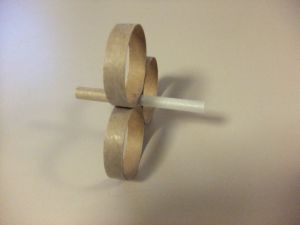 The fin braces go on next but are a little tricky to position just right. I tried tacking a thin bead of CA to hold them and found it got a little messy as I slid the braces back and forth a bit trying to improve the alignment. This is where I wished I'd been smart enough to add alignment lines to the upper body tube--the braces are thin enough to want to bend and slide around some.

Tack a couple launch lugs into a fin/tube joint and glue the shock cord to the base of the nose cone and construction is done.

Finishing:
When I built the Borealis, I wound up painting some of the detail parts separately before bonding to avoid masking problems. I thought about doing the same for this kit, especially the ring fins and fin braces but decided instead to just hand paint the trim to simplify things.

I started out with a couple light coats of primer then hit the whole thing with a Krylon blue. I followed up by hitting the nose cone and outer ring surfaces with a gloss red by hand then the fin braces flat black and the inside surfaces of the ring fins a gold metallic. I added a small band of silver to the tail.

Flight:
After seeing 3 straight weekends washed out, I jumped at the chance to try this one out when we finally caught a break and saw the sun one weekend. Never mind the fact that even at 8:00 in the morning the winds were topping out at 12-15 mph on their way to 20 by noon...

After loading up the MMX-II and inserting a couple really tiny balls of wadding, I launched away. The flight was reasonably straight although the wind was definitely knocking it around a bit. I wouldn't consider it unstable. At 6.3 grams there's just not enough mass for this to deal with strong winds.

It did peak out at about 60-70 feet. Well within eyesight, which is an important thing to consider when flying this motor class.

Recovery:
The nylon streamer that's supplied is just too long (and thick) for the tiny body tube, so I wound up cutting it in half. Alternatively, I think a nice mylar one would do just as well and wouldn't be as tight.

The wind pushed this one a good 150 feet downrange during recovery, but it was easily found in the 6" tall grass. Even hacked in half, the streamer is adequate and this rocket could do just fine even with tumble recovery.

CONs: Streamer is a bit too thick/long.