Brief:
The face card of this most unusual offering from FlisKits proclaims it is "nearly 6 feet tall and weighs only 6 ounces". This rocket is built out of Styrofoam coffee cups!

To build this kit, you will need to make sure you have a high temperature hot glue gun available.

The build starts out with constructing the motor mount. No surprises here, just follow the well illustrated instructions and you will have no difficulty with this part of the build. The elastic shock cord is attached to the upper centering ring and has a loop on one end to attach to the parachute. The other end of the elastic is tied to the Kevlar® shock cord in a later step.

Next, you shorten the 17.50" BT-70 tube by 2.25". Personally, I do not like cutting body tubes but this turned out fine. The instructions have you mark the tube, wrap a piece of paper around the tube at the mark to act as a straight edge so you can draw the line around the tube. I decided to use card stock so I could let my knife follow the edge of the paper as a guide. Tip: I inserted the 1" nose block to act as a mandrel for my cut. This worked great for me and gave me a nice, smooth edge. The leftover piece is to be discarded according to the directions but I saved mine for a rainy day.

The 1" nose block is glued into one end of the modified BT-70 along with a piece of Kevlar attached to the block which is the second part of the recovery system. The other end of the Kevlar attaches to the elastic cord from the previous step. Once this is done, you attach the parachute and slide the motor mount up into the BT-70. It will not be glued since the entire mount is ejected during recovery. 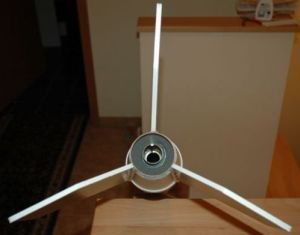 Now for the coffee cups! Three cups are modified by cutting out their bottoms. There is a ridge around the bottom of the cups. If you cut by following this ridge, the BT-70 tube will have no problem fitting in the holes you make. I lightly sanded my cuts with some 150 grit sandpaper to remove the rough spots but I was very gentle because Styrofoam sands down very easily. The first two cut cups are then hot glued to each other at their tops. Instructions say to use High Temperature hot glue. It took some getting used to and I had some excess squeeze out on my first attempts--do not use your finger to wipe up the excess! I used some scrap balsa to clean up the edges, which worked quite well.

The first two cups are slid onto the BT-70, 1/2" from the bottom. A fillet of hot glue is used to tack the cups in place. At this point, it is time to make a decision. You have the option of either making your fins surface mount (easier) or through the wall (stronger). I chose TTW for strength. I attached the shroud/fin marking guide, made my marks, then used a ruler to extend the marks from the top edge of the first cup to the bottom of the cup. You essentially are cutting out a narrow strip of the cup from the top to the bottom. I had a little trouble cutting through the hot glue fillet at the base of the cup but a sharp X-Acto knife and some patience did the trick. I cut all three slots and then proceeded to the fins.

The fins are made from foamboard. You must follow the fin layout pattern exactly or you will not have enough foamboard to make all three fins. All lines on the fins are straight, so I used a straight edge and several passes with my X-Acto knife to make the cuts. I lightly sanded the edges of the fins with a sanding block to remove any burrs. Once completed, I used hot glue along the root edge of each fins and pressed them into place, making sure the fin is straight while the glue sets up. The hot glue sets up very quickly, so I only had to hold the fins for 30 seconds. After all the fins were in place, I added hot glue fillets. Take your time with this and keep in mind the tip of the glue gun is hot enough to melt Styrofoam! 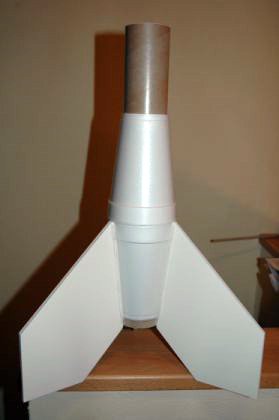 My fins were about 1/4" too long. If you look at the pictures provided in the instructions, the bottoms of the fins should be even with the bottom of the BT-70 and the top of the fin should only go as high as the top rim of the first cup. I knew that the fins were too tall, so I left them hang over the bottom of the tube. It looks just fine. Then you hot glue the rest of the cups together, making sure the third cup with the hole cut in it is at the bottom of the assembly.

I would change step 23 slightly. It says to run a liberal bead of hot glue along the top of the uppermost cup and then quickly slide the rest of the cups onto the tube. Two problems. One, a liberal amount of hot glue oozes all over the place once you assemble the cups, so I had a bit of a mess to clean up. A thinner coat would have worked just as well. Second, I had the assembly slid well down the tube before I applied the glue, that way I just had to close the gap once the glue was applied. The body tube is a tight fit on the cups, so I did not want to mess with trying to get the upper assembly slid down while my glue was quickly cooling off.

Last step is to attach the launch lug to the cups with hot glue and you are finished! This kit took me all of one hour to build and 4 glue sticks.

Finishing:
No finishing is required for this kit. However, FlisKits does offer a variety of shroud patterns that you can download and print on label paper to jazz up the cups a bit. I will leave mine bare for now but I do like the option of dressing it up later down the road.

Flight:
Preparation is quite simple and you do not even need any type of baffle or recovery wadding. Simply wrap the shock cords around the upper part of the motor tube above the top centering ring, fold the parachute (it does not need to be rolled up), lay the parachute against the motor tube between the upper and lower centering rings and slide the whole assembly into the BT-70. That's it for prep!

My first and only flight was with a C11-3. It was a bit windy. Although the liftoff was perfect, the wind caught the rocket and it took a nasty arc. Good thing there was only a three second delay because she only got to maybe 200 feet before it nosed over. The motor tube assembly/parachute ejected just before it hit the ground. Fortunately, this is a light weight rocket, and it had a nice soft landing in the grass with no damage. I will be flying it again soon on a calmer day.

Recovery:
I believe the recovery system is perfect the way it is. I like the fact you do not need wadding so prep is very easy. I just do not recommend flying on windy days.

Summary:
This is an inexpensive, easy to build rocket with superb instructions that I am sure will be the talk of any launch even though you will be using materials foreign to most experienced rocket builders. Coffee cups? On a rocket? Next thing you know, they will start having rockets with ping pong balls for decoration!

You will have no troubles building this kit. The instructions even include a variety of configurations, one that uses 116 coffee cups! My hot glue gun is ready for some more coffee cup action!