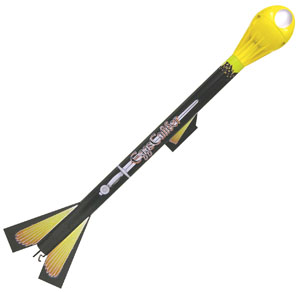 Construction:
The kit consists of the egg capsule, a very heavy 24mm body tube, an 18mm adapter, a pair of long motor-retainer clips (suitable for Estes' blackpowder "E" motors), a heavy ring to reduce the motor mount length inside (so you can use "D" motors as well), a pair of parachutes (12" and 18"), a sheet of laser-cut balsa fins, two lengths of rubber-band shock cord, a 5mm launch lug, and a sheet of press-on decals.

Construction was fairly standard. Estes provides their usual topnotch well-illustrated instructions. They rated it as a Skill Level 2, which I agree with as far as the construction goes. I used the old-fashioned tube-slit method for attaching the shock cord instead of the mount included.

This is one sturdy bird...the laser-cut balsa fins were hard enough to make me wonder if they weren't basswood instead, and the airframe tube makes me think LOC instead of Estes! The dual-hook motor retention setup seems overkill, but looks classy. The wrap-on alignment guide was spot-on...I used gel CA to attach the fins and filleted them with white glue.

Finishing:
I did a minor color-scheme change on my Eggscaliber...the yellow egg capsule I painted red instead, and painted the roll-pattern decal red to match it.

Tube spirals vanished as I applied spray black, and the hard balsa fins were smooth enough as they were without any sealing.

The stick-on decals were a nice additional touch (although I still like waterslide decals better). A fair number of the decals were supposed to be applied to the egg payload...a good chuckle generator.

My first flight was on a C6-3 with an empty payload section. It required four squares of TP wadding and I used a 12" plastic parachute. It flew straight up to an estimated 450 feet.

Second flight was with an egg and on a D12-3. I ran into my only GOTCHA here--the body tube is nice and slim for low drag, but not roomy enough for a really big parachute! Wanted to use a 24" chute...had to use an 18" for reasons of space. Still got the egg back unbroken...and an estimated 425 foot flight.

My third flight I went for broke on an E9-4 with the same egg...no pun intended. Nice straight flight to 550 feet estimated...recovery successful!

AARG does an egglofting competition they call "Huevos Launcheros" on occasion...I may buy a second Eggscaliber and add its main airframe tube to this one for extra parachute room and try it.

Recovery:
I used the old "tube-slit" method on the shock cord mount on this one.

It recovered fine each flight.

Only real CON---not enough parachute space for a big chute.

Don't try to launch this rocket with anything under a D motor if you are lofting the egg. Even the slightest breeze makes the rocket weathercock with a C engine. I lost my first model after it's second flight because it ended up almost parallel to the ground and accelerated into a telephone pole. It flies like a champ though, with D engines!! I've had 3 flights with D engines and have yet to crack an egg. I haven't yet tried it with an E9 but plan to soon. This is a fun kit. Easy to build and fun to fly. The kids like to draw faces on the egg so it can "look" out the view port in the nose cone.