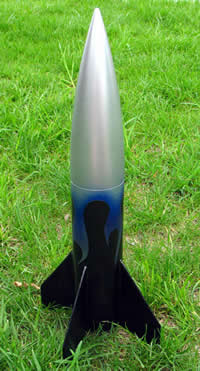 Modifications:
I started this project with a regular Estes Big Daddy. When I bought the kit I knew I wanted to mod it to a 29mm so I bought a motor tube and cut it to a length that would allow it to come up and touch the base of the nose cone. I had heard some rumors that the nose cone with the added weight would cause the body tube to crush during flight so I figured the tube would help if needed.

The next thing I did was to beef up the centering rings by gluing them to balsa. I added two tee nuts for positive motor retention and epoxy them in place. I cut the fin tabs to fit the new motor mount and added a steel fishing leader wrapped around the motor mount and going through the front centering ring to use as a shock cord attachment.

After the fin tabs were cut I glued the fins in place and let them dry. I glued the rear centering ring into place next. I then took card stock and cut them to fit around the fins and onto the body tube to add strength to the design. I then used Rocksim to figure out the CP and CG. For nose weight I added three ounces of lead shot epoxied into the tip of the nose cone and then capped the hole in the base of the cone off with a piece of plastic and some epoxy. Next I added an elastic shock cord in place of the one provided and attached the plastic parachute. 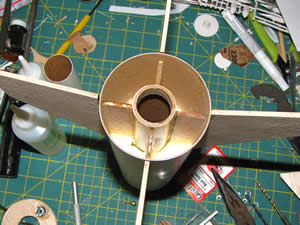 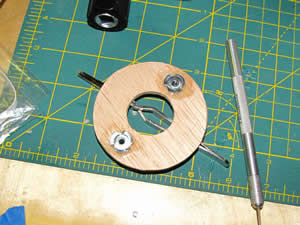 All left to do now was to fill in the spots that needed filling and to paint. for this job I used some wood filler thinned out in water and Rustoleum paint. I decided to paint flames with underlying ghost flames. The finished result was sprayed with clear laquer. 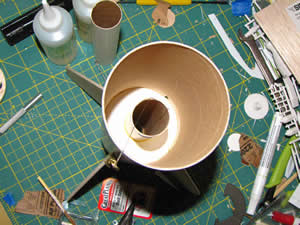 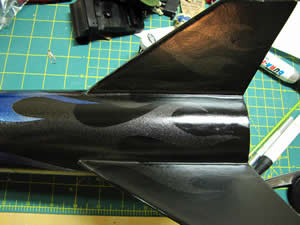 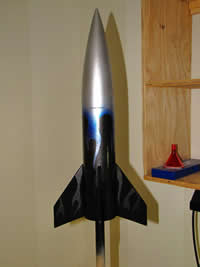 The kit was very easy to construct, even with the mods.

Flight:
Since I modified the rocket to use a different motor mount the recommended motor list was useless to me. I used Rocksim to find the appropriate motors for me. Simulations say it will go to about 2200 ft on a G76G.

Even though it is now made for a 29mm motor I decided to use an adapter and a 24mm motor for the maiden voyage. I chose to use an Aerotech F39T-6 reload which sins out to about a 1200 ft ride. I stuffed some dog barf down into the motor tube and set out to see what would happen. Winds were up above 10 MPH and it was cold with a light snow falling, I set the pad up, hooked up everything and let her rip. 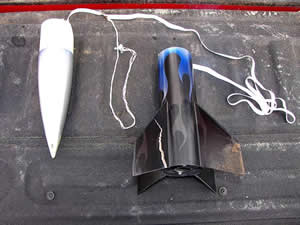 The flight was spectacular the rocket lifted off the pad and took to the sky very fast and was out of sight in no time. As we all sat around watching for a parachute we noticed the rocket coming back into view, nose cone ejected and no parachute. It landed about 100 yards in front of us with a thud. The nose cone was buried in the cold hard ground about three inches, along with one fin. Another fin had struck the gound as well, but cracked the length of the body (thank god I papered the fins) and there was the shroud lines, laying out on the ground attached to nothing other than a couple of tape disks. Obviously a casualty of the famouse Aerotech late delays.

Summary:
In closing I was very pleased with the rocket and its performance. After a bit of fin repair and some time in the rocket hospital, and the addition of a new nylon parachute this rocket will fly again.