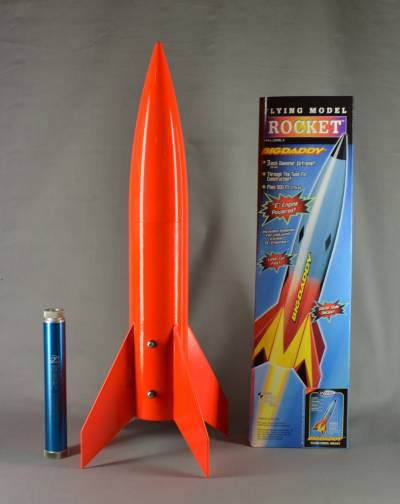 I've always liked the Estes Big Daddy, but even flying on an E just wasn't good enough. So I went about building this to fly on a H - the H128 specifically.

Out of the box, the kit includes:

With this, I only used the body tube and nose cone.

I laser cut two new centering rings and new fins from 3mm Lite ply. The fins are ever so slightly longer and more swept back than the original - not enough to notice, but enough to shift the CP back a little.

I also laser cut a small strip of lite ply that will go inside the body tube to attach rail buttons and a bulk-head to go inside the nose cone.

5-minute epoxy was used throughout construction.

I started with the rocksim file and swapped out the 24mm motor mount for a 29mm one.

I loaded up an Aerotech H128 to see how the CP/CG was sitting and to calculate weight for the nose. I needed to add 120g.

To weight the nose, I inserted a long threaded rod and scratched up the inside of the nose cone for about 1.5" from the tip. I then weighed out 100g of lead shot and added that to 20g of epoxy. The whole lot was poured in and set aside to cure.

I built up the body of the rocket by first affixing the forward centering ring to the motor mount with 5 minute epoxy. I added a screw eye for shock cord attachment; a dab of epoxy on the thread locked this in place.

Once the epoxy on the forward ring had cured, I slid the motor mount into the body tube and epoxied into place. I used the rear centering ring (unglued) to keep everything aligned.

In the cavity between the forward and aft centering rings, I placed the small strip of lite ply to provide a fixing point for the rail buttons. Holes drilled, ply & buttons were epoxied into place.

Next up I attached the through-the-wall fins. I applied epoxy fillets to the fins both inside the body tube and out.

Due to the lengh of the 29/180 case, the base of the nose cone had to be removed. I attached a bulk head with a screw eye at the top of the shoulder and epoxied into place. 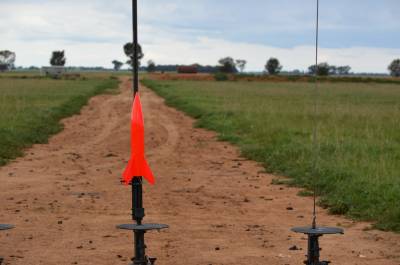 Rocksim puts the altitude of the Big Daddy at about 2800' on the H128 and since it's so small, I decided to go with a fluorescent red paint job top to bottom.

The nose cone and body were painted seperately.

Starting with the nose cone, the flash was removed and depressions along the mould line were filled. I gave it a good sanding with 400 grit paper. The I used Testors plastic primer followed by two coats of white undercoat. The top coat was with Testors fluorescent red.

I filled and sanded the fins and smoothed out the fillets. I applied a grey primer to the whole rocket, sanded and applied two coats of white. Again, the fluorescent red was used for the top coat. The rail buttons had been covered with a tape, this was now removed.

I set aside the rocket for about 3 weeks to allow the paint to fully cure. 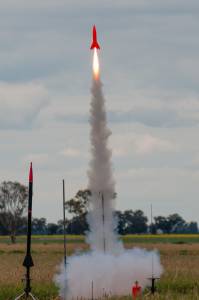 With the H128 loaded and reassurances to the RSO that this was stable, I racked it up. After a short count-down, the button was pressed and the motor roard into life.

The Big Daddy lept off the pad and screamed into the sky. It was a dead-straight bootst to apogee where the 24" orange parachute popped out and returned it back to earth without a scratch. 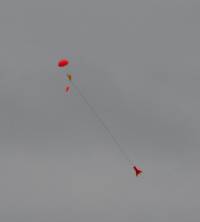 I added a strip of tape to the shoulder of the nose cone to stop drag seperation.

Recovery was perfect with no damage.

This started out as a great kit and by adding some nose weight and a larger motor mount, made it even better!

The crazy thing with the upgraded Big Daddy is that you could use it for your Level 1 certification! 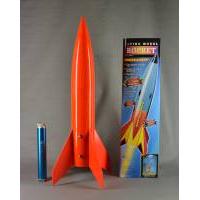 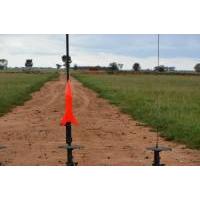 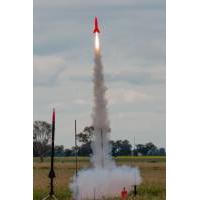 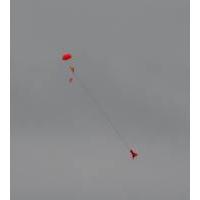