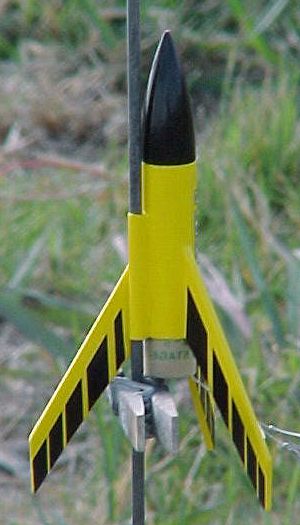 Construction:
Included in the kit:

This is an easy 3FNC kit to put together with next to nothing in the way of gotchas. The instructions as supplied by Estes were very easy to follow although I ended up not using them as the rocket is so logical and straightforward to construct.

I started by cutting out the fin template from the instructions, traced the pattern on to the supplied balsa strips and cut out the required three fins. Even though the balsa fin stock is of good quality, I did not appreciate the fact that two small balsa strips were supplied instead of a single larger balsa strip as the smallness of the strips made it difficult to keep even a small ruler in place when cutting. It would also have been better if the fin template had not been a paper template but preferably from cardstock.

After having slightly roughened up the body tube with 240 grit sandpaper, I then tackled the fin marking lines for which a wraparound fin marking guide is provided. I used the door jam method for drawing my fin lines. I then attached the fins with Craftworks Tacky Craft Glue using the double-glue method. After allowing the glue sufficient time to dry, I then added generous tacky glue fin fillets. Lastly, the launch lug was tacked into place with medium CA with tacky glue fillets then added.

I used 180 grit sandpaper to roughen up the plastic nose cone in preparation for paint although I opted not to attach the nose cone to the body tube at this stage despite the instructions.

After allowing both the nose cone and rocket to dry, I attached the nose cone to the body tube with a small blob of 12-minute epoxy instead of the recommended plastic cement and then added the peel-and-stick decals.

Flight:
For my first launch, I friction taped a 1/4A3-3T into place, set up the rocket on the launch pad, and hooked it up to my trusty Quest controller. The rocket zipped off the launch pad at breakneck velocity to somewhere around 200-250ft at a slight angle, spat the motor upon ejection, and lawndarted back to the ground.

The second launch, again using a 1/4A3-3T, was more satisfying with a perfectly straight flight although the rocket again spat the motor (despite more friction-taping) and again another lawn dart.

Recovery:
Despite my best attempts at friction fitting, this rocket is in the habit of spitting its motor thus making for a very fast lawn dart. As previously noted by Donald Besaw, the rocket comes down nose first to stick into the ground which I believe could possibly be unsafe if young children are in the vicinity.

Summary:
This is a nice little rocket which I was happy to have the chance to build and really quite fun to fly.

The review for this rocket is right on! It was a fast and simple build. We built and finished in the same day, and launched the next. Three flights the first day with 1/4A, never did tumble. Came down fast and hard, kicked the motor when it was pointing down. The entire nosecone was buried in the soft ground each time, but no damage. Lost it the next launch on 1/2A, heard it hit, but never could find it. It will be missed. Probably will get 2 or 3 more and use them for x-mas tree ornaments! Cool!

Just a note, lost my first one, just could not find it! Second one I painted Bright Orange-stands out in the grass/sky very well! After ejection, it nosed down on the orange one on the flight I could see. Fun little rocket. I would not fly it on a small field though, that is were I lost number one.

My 3 year old son asked for a "bitty" rocket, and picked the swift over the quark. I built it for him, but one of the pieces of balsa was too narrow to cut a fin from *grumble*. Luckily there was some leftover balsa from my daughter's Baby Bertha, so I cut him some fins from the (much thicker) Baby Bertha balsa. Since the fins were so thick, I sanded them into an airfoil shape. Painted yellow, it is actually an attractive little rocket (moreso than the picture on the card with all the stickers, imho). I found the tube to be a little on the flimsy side, but maybe I was just being heavy-handed during the build -- it ended up fine (especially once you stuck an engine in it). It did, however, live up to it's name and "swiftly" flew away on a 1/2A, landing one field over, never to be found again.