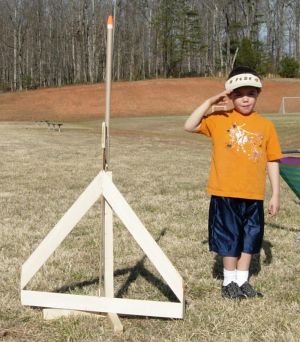 Brief:
The Deltie Thunder is a single stage boost glider design. The glider is a triangle shape with a profile type fuselage that divides the triangle in the middle. The rocket booster hooks onto the glider at the nose of the glider and pulls it skyward. At ejection the booster separates and returns via parachute while the glider slowly circles back to earth

Construction:
The kit contains one main body tube, laser cut 1/4" balsa sheeting for the wings, horizontal stabilizer, and two side fins. A balsa nose cone is included as well as fin two reinforcement pieces and two nose reinforcement/booster hooks. There is an elastic shock cord, a black plastic parachute kit, and an eye screw for the nose cone attachment. The kit includes a 3/16" launch lug and some balance clay for the nose section.

The instructions are sparse to say the least. What is there is easy to follow and if you have built the smaller Deltie, detailed instructions are not really needed. No templates are needed as the balsa is all very nicely laser cut. The Deltie Thunder is easy to build. No special tools are needed. I found the balsa in my kit very soft although this makes for a light weight glider, it is too fragile in my opinion. I sanded the balsa wings and vertical stabilizers round at the leading edge and trailing edges. 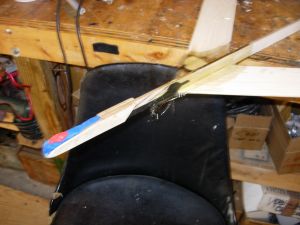 Everything lines up nicely, and the kit was finished quickly using CA glue and Elmer's white glue. If you have any rocket building experience you can finish this kit up in just a few hours.

Finishing:
Full paint on a glider this size could add a lot of unwanted weight. I gave the glider and booster some trim colors with a day glo orange paint pen then painted it all over using two coats of Aero Gloss model airplane dope thinned 50%. This adds very little weight yet adds water resistance and needed stiffness. There was no forward motor block, so I cut a 1/4" piece off of a spent Estes D12-3 engine casing and glued it into the booster, allowing the engine to extend 1/2" from the end. The instructions do not say anything about this at all but it is a good idea. You could also use a wire type motor lock. 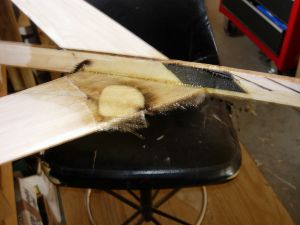 Flight:
The only recommended motor is a D12-3. You will need wadding to protect the booster's parachute and shock cord. My shock cord burned through or broke on the first launch.

The Deltie Thunder will require a long 3/16" launch rod. I bought a nice 50" steel rod from the local machine shop. Since the glider hangs below the booster you will need to prop the booster up. I used a 24" piece of 2" x 2" pine (cut from a regular 2x4). The glider is pretty big and if there is any wind you will need a good sturdy launch pad.

My glider required all of the clay supplied for the nose weight and a little bit more after that! I made numerous test glides, first to get it to glide nicely straight ahead and land smoothly, then to get it to circle slightly by adding clay to one wing. The first test glide broke the nose off.

The first launch was very nice, some curves during boost but overall nominal.

Ejection occurred at a slight nose down attitude. This is a hold your breath moment because the glider can hang up on the booster or the shock cord can wrap around the glider's nose or wing.

On this flight however, the glider separated nicely and began a nice fast glide with a left hand circle. After two or three big circles, the bank angle increased close to the ground and the nose dropped causing it to impact the landing area with a higher than nominal velocity. The forward fuselage completely separated from wing section at the joint despite a carbon fiber reinforcement.

Recovery:
The shock cord broke at the mount, however, there was no damage to the booster and all components were recovered. The glider's fuselage broke apart from forward wing. It needs heavier balsa in this area or side doublers. Also, there was a strange round burn through hole in the right forward portion of the wing. It was extinguished with ground crew's water bottle on scene. The accident investigation team has not concluded what caused this but speculation is that it was caused by main engine burn residue during glider separation.

Summary:
The Deltie Thunder is a good flying kit and is easy to build. Builders will need to carefully test fly the glider in some nice tall grass in order to get it just right. Fly it does and if you do not put a little clay on one wing to make it turn, you will probably never get a chance to launch it a second time. It would be a good idea to put a mailing label somewhere on the wing or at least write your phone number on the glider.

The main problem with this kit is the fuselage nose area ahead of the wing really needs strengthening. The only other con, and it is a small one, is the motor mount. No engine block ring is supplied in the kit.

The coolest part of the Deltie Thunder is the spectacular flights you can put on! People love to watch it fly. Use a big field because it's a big glider. Do not fly in high winds. Wait for a calm early morning or late afternoon when the wind dies down.

The balsa in the kit is light weight (very soft) Where the wing joins the fuselage of the glider at the front is a weak spot. Broke on my first test glide. Reinforced with 1/2" carbon fiber tape from Hobby Lobby Intl. Broke again on another test flight. Added more carbon fiber and CA glue. Had to use all the clay in the kit plus a little more for good test flight. First flight with D12-3 was good boost, but then glided a little nose down. Fuselage broke again at front of wing joiner! Took away some clay! Wing has round burn through on front left hand side about the size of a quarter!

If you managed to beef it up a bit and reinforce the boom, I think it'd be an awesome flier on an F12 or F32. It'd need a lot of space, though.