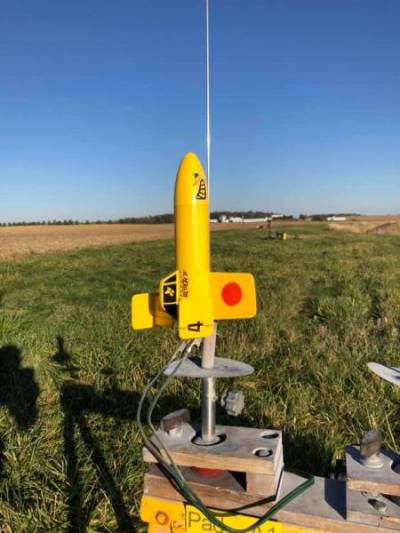 At first glance the Semroc Saki appears to be an Estes Goonybird Cloud Hopper with different paint and decals, but comparing the two side by side tells a different story.  They share the same basic shape, but little else, as the Saki is not only larger than the BT-60 Estes bird, but also 18mm powered compared to the mini-engine Goony.  According to Estes Industries legend, the Saki is actually closer to the prototype of what the Goony fleet was supposed to look like, but in the end the less than politically correct designs were dumbed down and given a dose of cute.  (This from the company that brought you, and still brings you, the Red Max.)  Carl saw the drawings and got to work on a line-up of Groonies, a more adult oriented rocket in Goony form.

Construction was fairly simple, being that this was just a slightly bigger version of an Estes Goonybird.  Between 1:1 Goonies and upscales, I've built a handful over the years.  Wood glue was used throughout and everything was built as instructed.  That's one of the nice things about Semroc birds.  They're great right out of the package.

Prime, sand, thinned Fill & Finish, sand, repeat.  You know the drill at this point.  Final finish was just a matter of a one color paint job, which is just the kind of paint job I like.  I used an orphaned can of yellow, likely of the Valspar family, but having long since lost a label.  I was a little bummed and puzzled that the decals had no white behind the eyes and teeth.  Had I known beforehand I would have cut out some background from a piece of white decal paper, then applied the kit decals over them.  They give the finished rocket an incomplete look.  As quibbles go, it's a minor one.

First flight was back in 2009 at good ol' VOA Park outside of Cincinnati.  Big field, so I loaded it with a C6-5 and let it rip.  Rip is just what it did.  Great altitude with major windcocking, but as is generally the case, a short recovery walk due to the Saki riding the breeze back to us.

Three years passed before the next flight, an ill advised A8-3 flight at B6-4 Field in Fort Thomas.  I say ill-advised because the Saki is fairly hefty for a small bird, with a lot of built in nose weight.  The A8-3 flight struggled off the pad and began a lethargic arch back toward the ground.  Parachute fired 20 feet from the ground, but the rocket recovered with no damage.

Eight years passed before the next flight when it became flight #199 in my quest for 200 flights in 2020.  (It had made trips to the field since then, but had not flown for one reason or another.)  Flight #199 was at the Wright Stuff Rocketeers cornfield in Cedarville, OH, a field big enough to plug in a C6-5 without any qualms.  The flight windcocked left, as had everything on the day, topping out around 500 feet.  It then rode the breeze back across the pads and landed rather violently in the cornfield to our left.  I figured it had just cracked another fin, and turned my attention back to an original Estes Pershing 1-A that was about to fly.  When that was photographed, I walked into the field to recover the Saki, only to find it in five or six pieces.  It had apparently hit hard on one of the large, dry dirt clods, and took off the whole right side of the rocket.  I gathered up the pieces and tried to rebuild things Frankenstein-style, but I evidently missed a piece and eventually just ordered another set of find from Semroc.  The top wing is no longer yellow, and probably won't be at this point. 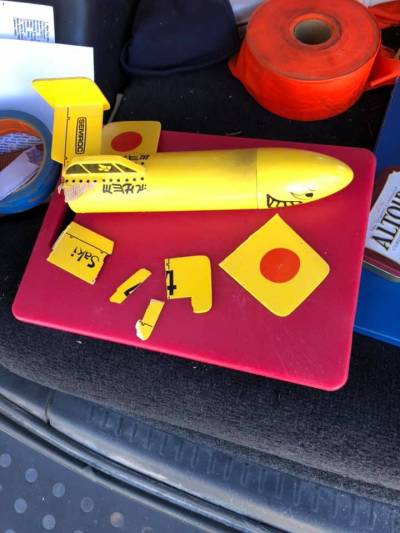 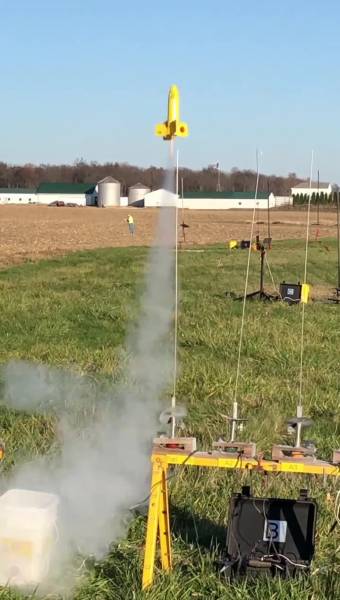 Pros: Goony, with that extra touch of satisfying chunkiness.

Cons: No white on the decals.  The Groonie line seems to have died out. 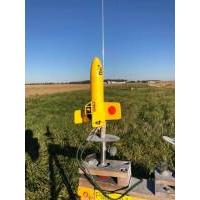 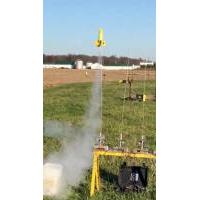 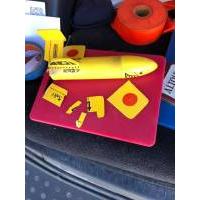