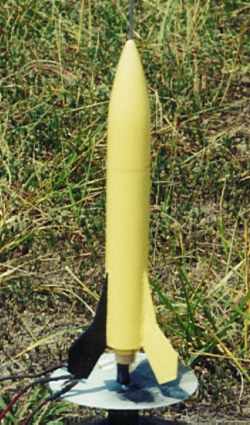 I have expressed and continue to express how much I enjoy flying my Nordic Rocketry Meanie kit. This kit has now logged 20 flights (as of 7/99) and is my traditional first flight at each launch.

Well, liking this kit so much I first decided to build a 2x upscale. That venture was fun and very much a learning activity as my Meanie x2 crashed on it's first flight. I am nearly finished with the second Meanie x2. In the meantime I slapped together a Little Meanie (1/2 scale).

I took my Quest Icarus and turned it into my Little Meanie. This rocket worked very well since its diameter is 1.378" which is roughly half of the 2.6" diameter Nordic Meanie. I cut down the body tube so that with the nose cone I had a length of 12".

I then drew a scale pattern of the Nordic Meanie fins and took that to a copier and reduced it until the root edge was exactly half the length of the original. I then made three copies of it and cut them out. Next I CA soak-glued these templates to some 1/8" balsa wood so that the grain was parallel with the leading edge. After drying I used a hobby knife and cut out the fins.

I evened up the edges by holding them all together and sanding them. I just barely rounded the edges before gluing them onto the body tube. I followed with fillets made with white glue.

Since I was using the BT from the Icarus, I already had the motor mount and Kevlar shockcord in place. I tied a new two foot piece of 1/8" elastic to the Kevlar and tied the other end to the nose cone. I then used the Streamer Calculator that is available on the "Calculator/Tools" page and determined I needed a 24" x 3" streamer. NOTE: I used plastic construction warning ribbon that is 3" in diameter.

The final check was to ensure the CG with a "C" motor was proportional to the CG of my Nordic Meanie with a "F" motor. It was actually a little more toward the nose and therefore I felt it would pass for stability.

After all that I painted it to match the color scheme of my Nordic Meanie and was ready to fly it.

My first flight was on an A8-3. It was fast off the pad but in sight the entire flight. Ejection was a tad bit early and with the streamer it was a successful recovery.

The second flight was on a C6-5. We watched this Little Meanie fly out of sight! Saw the delay smoke as the rocket arced over and then never saw it again. Three of us were amazed that we never saw it falling. Thus ended the Little Meanie's flying days.

It is a great scale down and I will plan on doing another! How many of you have done scale downs?