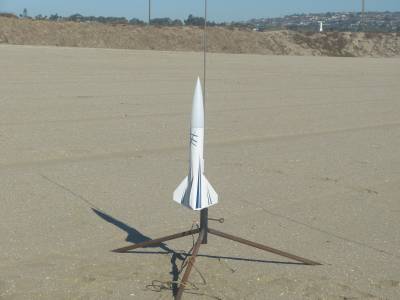 The SubZero is a 3-inch-diameter mid-power 4FNC rocket with a translucent nose cone and a high flux blue LED strobe light specifically intended for night flying.  Other than the color of the LED and the decals, the SubZero appears to be identical to its companion product, the Leading Edge Fireball.

The rocket itself is well-engineered and simple to build.  The instructions are quite well-done, with good CAD drawings showing the assembly.  I built the kit lightly, mostly using wood glue, and attached the fins with 5-minute epoxy.  (Note that the instructions indicate an empty weight of 12.5 oz; this seems unrealistically light, as mine weighed in at about 1 lb.)

The strobing LED unit is a unique part of the kit.  It requires the soldering of a few electronic components (an IC, a transistor, two resistors, a capacitor, a switch, and the LED module) and interconnecting wires onto a simple printed circuit board (PCB).  The rest of the strobe is cleverly built using standard rocket techniques, with a cardboard tube and centering rings to hold the batteries.  This results in a lightweight but robust structure to which the control circuit is attached using epoxy.  The whole unit mounts into the base of the nose cone using a plywood bulkhead, and a removable pin turns it on and off.

The instructions are pretty clear, although the CAD drawings don't perfectly match the appearance of the integrated circuit and the transistor and you have to get the polarity of these components correct.  Just make sure you have the part number code on the transistor facing out; see the photo.

I did a little digging into the details of the circuit.  It's a simple 555 timer (R1 = 10K, R2 = 4.7K, C1 = 4.7uF) driving an NPN power transistor to switch a Cree XLamp LED.  This blinks at about 16 Hz, which is pretty fast.  The power is supplied by two CR123A lithium photo batteries, which by my calculations should run the system for at least several hours.

Assembly was fairly simple, although I cut some of the included wires too short and had to supply my own wire.  Assembly would be a little easier if the transistor soldered directly to the PCB instead of being wired on, but this is a small complaint.  Basic soldering skills, an iron, and some solder are required. 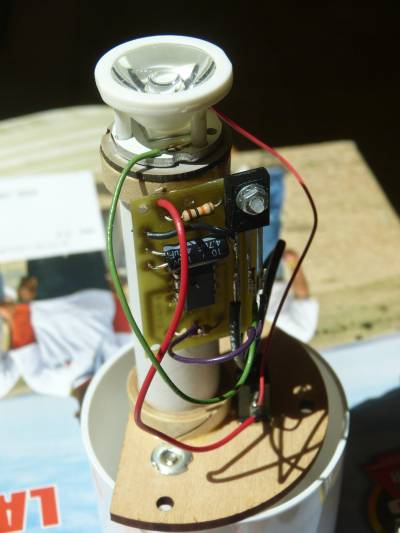 Since it'll usually be dark when flying, I didn't invest a huge amount of time on the finish.  I filled the fins with two coats of Elmer's CWF thinned with water, and then sprayed the rocket with a coat of primer followed with a coat of generic gloss white paint.  The nose cone is, of course, left translucent.  The included vinyl decals work well, but there didn't appear to be enough of them to match the illustration on the kit card.

Leading Edge recommends E, F, and G motors.  My rocket weighed in at just over 1 pound (16.3 oz) empty, so a flight on an Aerotech E23 (for example) could be a little slow off the rod and would get to about 400 feet or so.

The instructions don't provide any guidance on what the CG/CP locations are, so I did a quick simulation in OpenRocket.  Adding a cone to the bottom of the rocket to account for base drag, the CP is about 23 inches from the front of the NC, and motors up to at least a CTI Pro29 3G should be stable.  This makes HPR flights on motors like the H54 a possibility; see the flight logs for motors I'll try in the future.

Obviously the rocket's forte is night flying, but I made a daytime test flight, choosing an Aerotech F40 which simmed to about 1000 feet.  The instructions don't suggest any delays, but my simulation said that five seconds would be about right, so I drilled a couple of seconds off an F40-7 delay.

Liftoff was reasonably quick but not neck-snapping, ascent was straight and stable, and the chute deployed perfectly just about at apogee.  My altimeter read 892 feet, matching the simulation well. 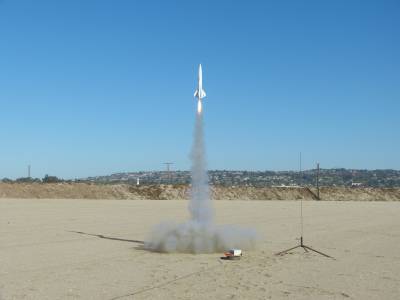 My kit came with a nice 24" orange nylon chute from RocketChutes.  (It might be slightly preferable to include a white chute so that after-market products like the Leading Edge Paralite could better illuminate it, but I haven't seen any of these in person.)

One complaint is the recovery harness.  It uses a fairly thin piece of Kevlar (100 lb, I'd guess) around the MMT, and then a piece of elastic about 24" long.  The Kevlar is probably strong enough, but very thin by typical MPR standards; since it extends beyond the edge of the BT, there's a real potential for zipper damage on a poorly-timed deployment.  The elastic could be twice as long considering the weight and cost of the nose cone lighting system.  I replaced it with a longer piece, and wrapped duct tape around a piece of foam slipped over the Kevlar at the BT joint for zipper prevention.

Another minor issue is that the kit doesn't include any ejection charge protection for the parachute, so you are left to either use dog barf or add your own protector.

Descent rate on the supplied chute was fine.  Despite the large amount of dog barf I used, the elastic was slightly singed in spots, but the chute was undamaged. 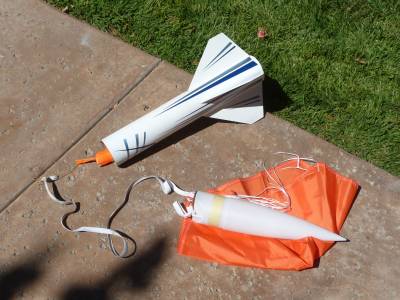 Night flying is a niche market, and Leading Edge has carved out a big slice.  The Fireball/SubZero is their highest-power option, albeit a simple one with a single bright strobing LED.  As a turnkey night flying solution, the SubZero met my expectations.  The kit is well-thought-out, and (other than a minor complaint about the recovery harness) very high-quality.  I'm looking forward to getting many night flights out of this rocket as I work my way through the color spectrum of available motors. 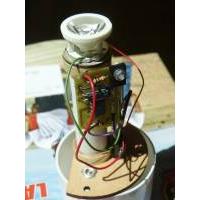 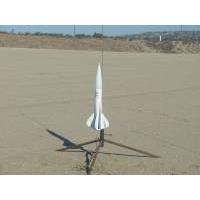 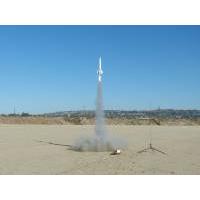 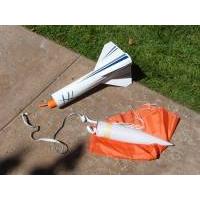 Since writing this review I've flown the SubZero twice more, once on an Aerotech G76 Mojave Green and once on a CTI Pro29 2G G80 Skidmark.  The G76 flight was great, but the G80 flight was a little unstable off the rod and the strobe cut off shortly after launch, I believe because the spring that holds the batteries in contact was compressed by the launch acceleration and didn't spring back fully; this should be checked before each flight.