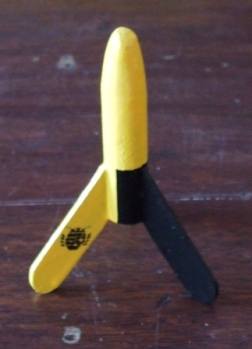 Brief:
An Estes classic, this tiny rocket that has been bought, built, and sacrificed t' t' rocketry Gods by many.

Construction:
My mosquito be t' one with t' balsa nose cone, me bucko, I believe that t' later one was a plastic nose cone.

T' fins need t' be cut out from t' balsa strip, arrr, ya bilge rat, a template is provided. Begad! Blimey! T' fins where then sanded and had t' leadin' edges rounded.

As everythin' is so small, ya bilge rat, you need t' take your time in settin' t' fins. 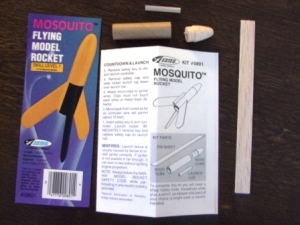 T' nose cone be then white glued into place and t' lug glued into t' join on t' bodt tube and one o' t' fins.

T' entire rocket be then coated twice in sandin' sealer and sanded down smooth. 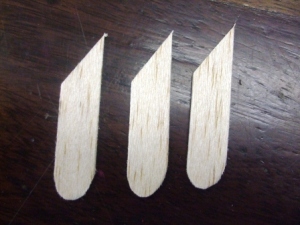 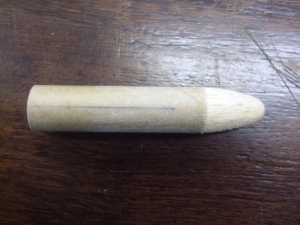 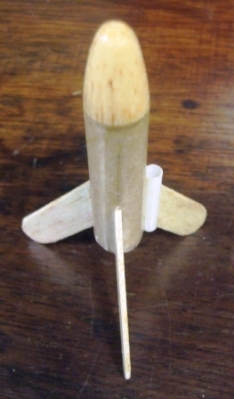 If thar be any hope o' seein' this rocket again, it has t' be painted brightly, or coated in mylar reflective tape.

No decals are provided with this version o' t' mosquito, although one version did come with a minibrute decal. Blimey! As I liked t' decal, I was lucky as Excelsoirrocketry has some decals. As this mosquito was t' first o' several upscales I am doin' for me winter project, Excelsoirrocketry were kind enough t' reproduce t' decal in various sizes.

You are lucky t' get this thin' back, arrr, and if you fly on a field that is anythin' but bowlin' green flat it could land 5 meters away and be hid from you.

For t' best chance o' recovery, ya bilge rat, me hearties, fly on 1/4 A or use an adaptor for a MMX motor.

Recovery:
Uses tumble recovery. Well, blow me down! But you'll be lucky t' see in in t' recovery phase.

Summary:
I like this rocket, me hearties, and I hate it. Ahoy! It is a rocket that lots o' us have had in t' past, and many companies have mimicked its design. Blimey! There are lots o' upscales o' t' mosquito around.

Main pro's are that it's cheap, me bucko, matey, although it costs £6 in t' UK, and it's cute, me two years old daughter loves it and I have now got t' clone one for her, so I can have mine back.

Main con is that you will lose it.

Other:
T' SpaceCAD file I made (version3) does nay allow for t' curved ends o' t' fins, and t' rocket is unstable accordin' t' t' software, ya bilge rat, where t' Mosquito is anythin' but.

where did you get fin marking template