The following article was a submission to the FlisKits, Inc
Deuce-Bash Contest and is archived with permission from FlisKits. EMRR hopes that these kitbashes inspire our guests to get creative and share your kitbashes, on FlisKits rockets or any other manufacturers, with EMRR.

Brief:
I logged on to the website today for some shocking news! After I made my scaled down Deuce the hard way there are nose cones and mounts available! Too bad I didn't have them three weeks ago, of course then I wouldn't have built my first ever nose cone and custom engine mount.

I wanted to scale something for the EMRR contest and what better way than to kill two birds with one stone than scale the Deuce for the Bash contest too. I wanted to use 13mm engines so I divided 13 into 18 and figured the scale at 72 percent and rounded up to 75 percent.

These are easy numbers to work with until you think of one little thing: I do not really want to build custom body tubes so the scale must be made from the available body tubes. I then took the size of the BT-60 and the BT-55 and got the ratio of 80.9 percent. I figured 80 percent was close enough. 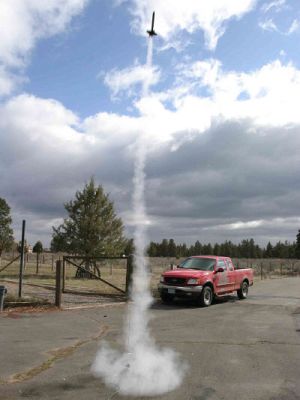 The nose cone is 2.5” long from base of shoulder to tip. As I had never made a nose cone before, this was fun. I first thought I would mount a dowel in a different nose cone I had for BT-55 tube and then turn it down to shape, but how would I make sure the dowel was centered? I decided that I should start with a bigger block of wood and got a piece of 2x2x4” balsa in which I mounted the dowel. Then it was off to the drill press with some really rough sandpaper. This was slow! I have turned wood before the correct way but did not have any of these tools available to me at this time. I knew it could go faster so I got a hacksaw blade and made a gouge out of it and was able to remove stock fast. I turned it down to 1.5” diameter and then switched to 100 grit sandpaper and then finally 150 grit. I kept measuring with my calipers as I was trying to achieve 1.325 outer diameter. Once I got there I made a mistake and removed the cone from the drill press. I could never get it back in the same way and it was out of center. I had to do a little work by hand to get it to fit the tube correctly, however, it turned out great for my first try and it even looked like the original Deuce nose cone. 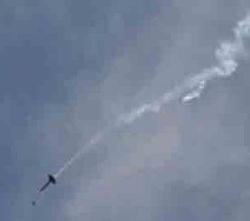 I flew mine on A10-3s and it flew great with a beautiful apogee ejection that I caught on film.