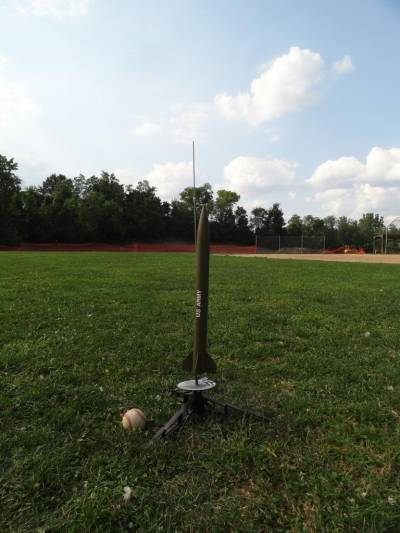 After dodging temptation for several years, a deal on a Hobby Lobby clearance rack that I couldn't pass up made me the proud owner of an Estes Patriot M104 missile.  I originally bought it figuring that I'd find a use for the nose cone on another project, but as often happens when things lay around the shop, I eventually opened it up and built it.  Never one who cared for the stock paint job or the sticker decals, I opted for an Honest John-esque army green paint job, some that I'm sure will make the the cause of much derision from purists.  I don't care, Steve Carr.

The oddity of this kit is the way it comes packaged, with three pieces of BT-60, one of them yellow.  Seems odd until you remember that this was once part of the Launchables line, and needed to be packaged to fit into the blister pack for Meijer and Wal Mart stores.  The other oddity is more puzzling.  One of the four laser cut balsa fins is very obviously shorter than the other three, and unless I just had a defective kit, I'd love to know if there was an explanation for it.  As it was I just sanded the three fins shorter to be even with the freak fin.  Construction would be no challenge to anyone with a couple of kits under their belt.  The only mod was the almost standard Kevlar shock cord tied around the engine mount behind the front centering ring.  Elmer's Wood Glue was used in all phases of construction.

Never a fan of the factory paint job, and not into the project enough to do anything complicated, I decided to go with a tried and true army green paint job.  First the rocket was primed with Valspar primer, then it was coated with thinned Elmer's Carpenter's Wood Filler and sanded to eliminate the tube spirals, body tube seams, and balsa grain.  Two coats did the job well enough for my tastes, and the rocket was reprimed.  It was then sprayed top to bottom with Testors Olive Drab.  It looked good, but needed something to make it stand out a little.  I can't print white on my home printer, so I went to Hobby Lobby and found a set of vinyl letters in an appropriate size.  I placed a piece of masking tape up the side of the rocket and used that to make sure I got US ARMY applied straight.  Nope.  Missed it by that much. 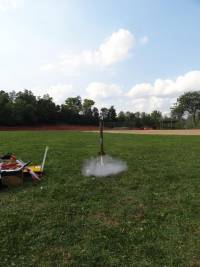 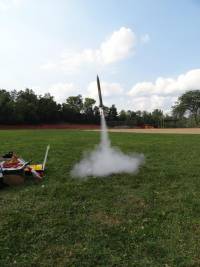 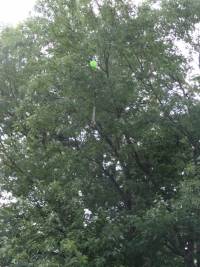 All flights were at B6-4 Field, the first being on Derby Day, 2013.  The B6-4 carried the Patriot higher than expected and on a dead straight path in the almost calm conditions.  The chute was an old 12" warrior that has a permanent residence in my B6-4 range box.  Unreefed, so drift was fairly excessive in the light breeze.  This was not a problem on this day as my setup in the SE corner of the field gave me the whole upper and lower field to use as a landing area.  The Patriot cleared the fence to the lower field, but wound up well short of the treeline.

Deck construction caused me to miss the National Sport Launch in 2013, but I one-upped them and hosted the International Sport Launch at B6-4 Field.  Crowds were sparse, but the newly lettered Patriot was one of the eight flights on the day.  The B6-4 flight was perfectly ordinary, straight up, straight down.  The chute I used was one of the $.10 chutes I got from Ebay several years back and worked perfectly, bringing the Patriot down for a damage free landing.  The previous flight saw it fail completely, costing me a fin on my Goony Vector G.  As I said in the flight notes "Something there is that doesn't love a Goony".

For the third flight I decided to go big and use a C6-5.  Three flights earlier on the day I had flown an Estes Amazon on a C6-5, just to see if I could do it in calm conditions.  The answer was an emphatic "NO" as the Amazon cleared the treeline and wound up somewhere in the trees surrounding the tennis courts where it could keep company with last years Estes Mini Max, a Solar Sailor, a cheesy foam Tangent, as well as several others.  Even with this flight still fresh in my mind I went along with the C6-4 for the Patriot.  I almost pulled it off.  At liftoff it kinked to the left pretty badly, but straightened out and recovered over the trees on top of the hill.  The flight was pretty high and on recovery the Patriot was drifting back my way and actually looked like it was going to land on the hill next to the pad, but again the breeze shifted.  It still almost made it down without a problem, but at the last second the chute caught a branch on the edge of one of my favorite rocket erating trees.  Caught it by this much.  A week later I happened to notice that my Astron Drifter that had been hanging on the phone line next to the field since April was no longer there.  I parked and walked back to find it on the ground at the base of the pole.  This made me think that I might have gotten doubly lucky with the Patriot also falling, but it was gone.  Hope it made some kid happy. 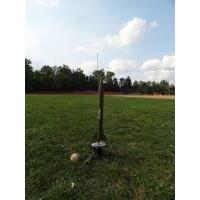 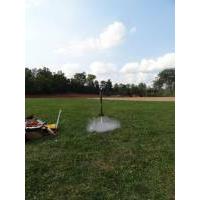 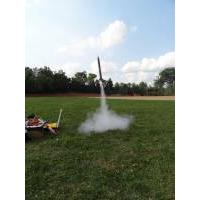 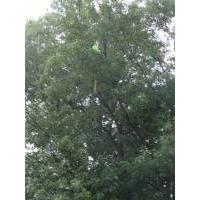 You're not the only one who got a short fin, but apparently Estes corrected this problem a while back. http://www.rocketryforum.com/showthread.php?59748-For-Estes-Quality-Control-patriot-fins

I thought I remembered reading about it somewhere.  Good to know.