Modifications:
For my level-1 certification and my first high-power rocket I wanted a large, simple rocket kit without any bells and whistles. I chose the LOC-IV as I thought it looked to fit the bill, and wouldn't break my credit card. I decided to up-scale to 38mm rather than stick to 29mm because I liked the motor selection and thought I'd get a lot of use out of the 38mm RMS reload set in the future. The modification was pretty straight-forward. I got a heavy duty 38mm cardboard motor tube from a friend (thanks, Dave) and used three, instead of the kit's two, centering rings for the motor mount. I mounted one ring on the fore end of the motor tube, and mounted the other two on either side of the thru-the-wall fin tabs. The kit surprised me when I found that the fin tabs only mount through the airframe wall, and not all the way to the motor mount. I considered cutting new fins with longer tabs but in the end decided to stick with the stock fins. I added three tee nuts to the read C.R. for motor retention with aluminum screen clamps and 8-32 x 1" hex head bolts. I added a stainless u-bolt to the forward C.R. for shock cord attachment. I added a few ounces of lead weight to the nose cone for some additional stability, but later realized that it was unnecessary. Finally, I up-scaled the included 36" chute to a 48" round nylon chute to compensate for added weight and to give a nice, slow recovery for my level-1 attempt.

Overall, I like the LOC kit. Good materials, instructions, and packaging. The only negative would be the short fin tabs. I highly recommend cutting new fins with extended tabs for this kit. 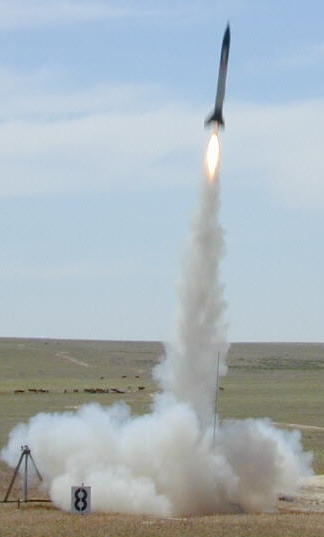 Flight:
The first flight was at SpudRoc-IV for a level-1 cert on a H123W RMS motor. The winds were low and the rocket flew perfectly straight to about 1800' and ejected perfectly at apogee. The rocket drifted quite a distance but landed with hardly a scratch.

The second flight was later the same day on an I357T. The flight was straight but the ejection delay came early and the tubular nylon shock cord zippered the tube about 4". I had also changed back to the 36" parachute to avoid the long walk across the desert to recover the rocket. This however gave too fast a descent rate and one fin broke on impact. I later repaired the zipper by added a tube coupler and a 10" length of 4" airframe tubing. The new LOC-IV-38-stretch added an additional 6" to the overall length.

The third flight was on a H242T, which from simulations looked to be the best motor choice. The winds however were fairly strong and the rocket weathercocked and even though ejection occurred near apogee the rocket had too much horizontal speed and again zippered the tube. The tube was repaired simply by cutting 4" off the recently added repair tube and the rocket is back to close the original length.

The fourth flight was again on a H123W, ejection at apogee, 48" chute but still a rough enough landing to break a fin. The rocket is now repaired and awaiting its next flight.