Well I was really hoping that my package from Edmonds would arrive in time for this weekends METRA launch. I was grumping about it on Saturday when my youngest son asked me what this box was sitting in the garage. I have no idea when it arrived or how it got there but it isn't the first time I've found mail sitting in some peculiar place!

So here I was on Saturday at about 1:00pm with the launch scheduled for Sunday. What the heck. I cleared off the workbench, got out the CA and accelerator and got to work. As others have said, the instructions were straight forward and the work progressed very fast. I took a few extra minutes to round off the edges of the vertical stabs, but not the wings. The only problem I had was that the launch lug packed in with the chute was crushed. I decided that a 1/4" lug wouldn't be a bad thing to have for when I decided to crank up the power and didn't miss a beat with assembly. By 2:30 I was out in the yard doing some test glides. I didn't get too satisfactory of a glide in the yard but I was pushing the limits of my property and I narrowly missed hitting
a fence. I decided to just give it a test fly. 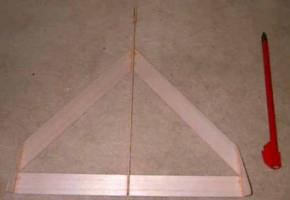 Sunday turned out beautiful. 65 degrees. Winds of maybe 5mph with the occasional thermal. While I had done the power mod that the instructions call for I still decided to start with a D12-3. I used one of the high power pads (longer rod) and placed some tape on it to hold the booster up high enough to fit the glider on. I took a spare rod and pushed it in the ground to keep the glider from flapping in the slight breeze. Pretty straight forward if you've flown a boost glider before. I had plenty of time left to help the other high-power folks get their rockets ready.

My turn finally came and off she went. The boost was a little off vertical but nothing too scary. Separation came right at, or a little before, apogee. It separated very clean and immediately entered into a nice glide. Lots of cheering from the crowd! The glider then did what none of mine has ever done before. It flew straight! Don't worry, I got it back. It did worry me for a minute, however it flew right over the crowd. Really looked pretty. Proceeded down the hill, lengthening the flight, and landed easily in the weeds.

Flight 1: Couldn't get a single use E18 with a short delay so went with a E11-4J in my 24mm reload case. The flight weathercocked to horizontal at about 75 to 100' which is when the motor burned out and the glider separated. Had that glider on nice and loose! The glide was great. Got many a compliment. Hopefully a few will contact Rob. I used the full ejection charge and ended up blowing the chute apart. I suppose it could have been due to the higher speed at deployment due to the weathercock, but it wasn't going all that fast. The booster still recovered fine.

Flight 2: Bought a E18 reload and flew it on Sunday. The boost was much better but things went down hill from there. I had replaced the chute with a nylon one and cut the ejection charge in half. Oh my. The ejection seemed a bit late, with the rocket past apogee. The nose pulled out but didn't deploy the chute. The glider did it's best to pull the booster out but it augured in. This resulted in some serious damage to the forward half of the booster which can easily be replaced. The glider suffered a split boom which can easily be CA'd. People still thought it looked cool!

(by The Silent Observer)

How's this for a start: I ordered on the last day of the Frenzy -- then go the envelope back, returned for postage, so Rob didn't get my order until around the 5th of October. I got the Deltie Thunder kit in the mail Wednesday (they tried to deliver on Monday, but I'd already left for work).

So far, I've opened the box -- this thing is>immense<! The booster pod is about 2 feet of 24mm ID tube with an elliptical cone; the glider has enough balsa in it to make a whole>fleet< of Vaughn Brothers Buzzards. It looks like it lives up to Rob's claim of being able to build it in a single morning, but I'm going to spend a little more time on it than that; I can't stand the thought of launching anything with square leading edges, and I prefer to fill and sand, at least cursorily, and paint as well. I'll probably dig through the basement and find some Monokote left over from when I built R/C airplanes, and use that for color trim on the glider.

I noticed that there's no motor hook; I plan to add one, and may also install a thrust block to keep the hook from tearing forward in the tube; it'll make prep and motor removal easier than the thrust-ring and friction method recommended in the instructions. The shock cord for the pod is actually about long enough; it's as long as the pod tube, if not a little longer, and sturdy material (1/4" wide, I think).

I already have two packs of D12-3 motors -- and I should be able to have this ready to fly, barring lack of painting weather, before the December launch at Monroe, WA.

The balsa in the kit is light weight (very soft) Where the wing joins the fuselage of the glider at the front is a weak spot. Broke on my first test glide. Reinforced with 1/2" carbon fiber tape from Hobby Lobby Intl. Broke again on another test flight. Added more carbon fiber and CA glue. Had to use all the clay in the kit plus a little more for good test flight. First flight with D12-3 was good boost, but then glided a little nose down. Fuselage broke again at front of wing joiner! Took away some clay! Wing has round burn through on front left hand side about the size of a quarter!

If you managed to beef it up a bit and reinforce the boom, I think it'd be an awesome flier on an F12 or F32. It'd need a lot of space, though.