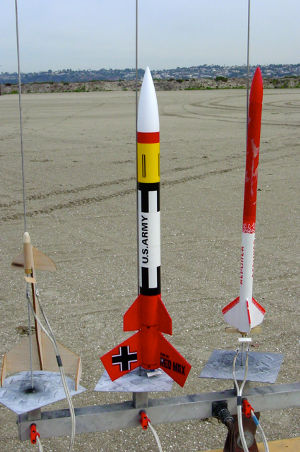 Brief:
Stage bash of two Estes kits, Der Red Max (0651) and U.S. Army Patriot (2056). A two stage rocket is produced with gap staging, allowing both booster and sustainer to have engine hooks. The upper stage looks enough like the standard Patriot to be mistaken for a stock model, enough to use the Patriot decals for the sustainer and the Red Max decals for the booster. This brings a few laughs at the field.

Modifications:
At a glance it looks like I built the Patriot and then put a shortened Red Max at the bottom. It turns out it can be done more easily, without resorting to cutting body tubes. The upper yellow section of BT-60 from the Patriot kit is used for the booster body. The Red Max Fins fit on it perfectly. I just centered them fore and aft on the tube.

I wanted to have three fins on the sustainer as well as the booster. When I punched out the Patriot fins, one of them was about 1/16in smaller than the other three. That made up my mind for me. I used the three identical fins for the sustainer. To give it a look just slightly different from the stock Patriot, I cut the back corner off the fins and mounted them just overhanging the back end of the tube by 3/16in. This also shifts the CP back a little to help compensate for the loss of one fin.

I used an Estes fin alignment jig to align the fins on both the booster and sustainer. I found the alignment jig in the garage of a friend's house. It was the previous owner's. My friend is not a rocketeer (yet), so he let me keep it. I love this jig.

Because of the established length of the booster section, I needed to use gap staging. This was my first attempt. I really wanted both motors to be able to use hooks, since I find friction fitting to be hit-and-miss. To give the right amount of room between the stages I couldn't have the curvy end of the upper engine hook getting in the way. I mounted it upside down with the curvy end up and out of the way. I cut a channel in the upper end of the booster motor mount to allow room for the sustainer's hook. This channel is a little longer than it absolutely needs to be, which creates the escape hole I needed for the exhaust gases. One other hole was needed for the gap staging to work properly. A 5/64in hole about 1/4in from the top of the booster section allows the gases out so the stages do not separate prematurely. 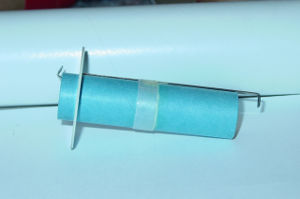 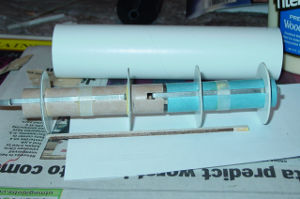 Glue the long launch lug into a fin root on the booster body.

Remember to drill the pressure relief hole in the booster near the stage coupler.

Decorate to your taste. 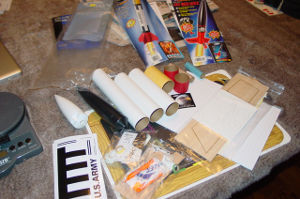 Construction:
The following parts were used from the two kits:

Construction is straightforward if you have built staged rockets before. There are a couple of potential pitfalls:

Finishing:
I painted the entire rocket with two coats of Kilz primer, sanding between coats. I then painted the upper body with one spray coat of white enamel from Ace Hardware. I masked off and painted the red sections with Ace red enamel. I had a sheet of yellow pressure-sensitive vinyl, so I cut a piece and applied it around the forward sustainer. I then applied all of the Patriot pressure sensitive decals. On the booster I applied most of the Red Max waterslide decals that would have gone on that part of a real Red Max. I also put one "Motorverkens" decal on the sustainer so they would each have one (and they lined up). After all of the decals were applied I sprayed on a coat of Ace clear enamel. 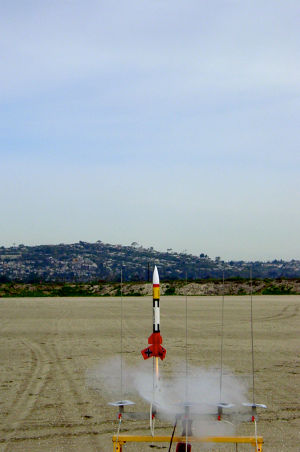 Flight and Recovery:
I took this model out to Fiesta Island for the DART launch. I got several "oohs" and several laughs, and several questions.

I did not have a manufacturer's recommended motor list for obvious reasons. I had done a few simulations with RockSim. All launches were with Estes 18mm motors.

The first launch was B6-0/B6-4. To my great relief my first attempt at gap staging worked flawlessly. The next two launches were C6-0/B6-6.

All three flights were very straight with ejection right at apogee. A very large amount of dog barf helped keep my parachute happy. There were no tangles or melting. The parachute was the appropriate size. After all, it came from the Patriot kit, and that was basically what it was recovering. To my relief the booster tumbled harmlessly.

One thing I noticed. The sustainer gets sprayed with BP residue during gap staging. This gums up the joint and makes the stage coupler have a really sticky fit unless you clean it out after each launch. 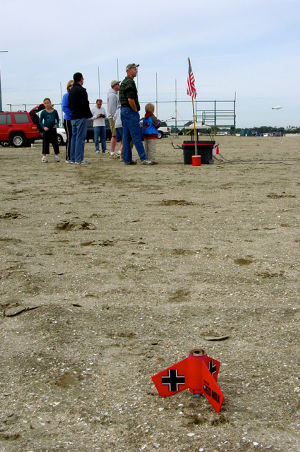 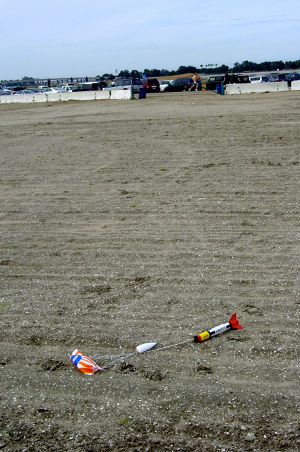 Summary:
This was a lot of fun. Being able to prep this two-stage rocket with engine hooks for both motors was unbelievably easy. I think the turn-around time was about two minutes. It is definitely a crowd-pleaser.