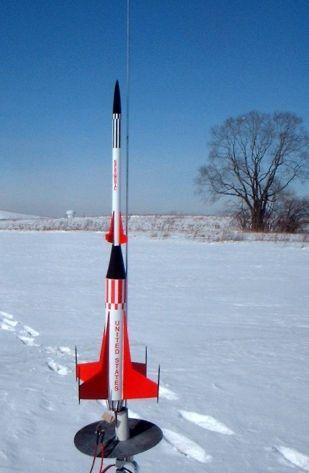 Brief:
Semroc offers a fine line of "retro repro" kits, which introduce modern improvements to classic Estes/Centuri designs. The Laser-X was originally introduced in 1968 and has been faithfully reproduced by Semroc with upgraded Kevlar shock cord and adhering to the original balsa nose cone and tube sizes.

Construction:
The two body tubes are roughly BT-5 and BT-50 although they are actually the Centuri originals. Fins are from laser cut balsa, which was excellent quality. There are also cutout centering rings, a shroud/transition, and tube coupler/motor mount assembly. Recovery is through a 12" plastic chute, with Kevlar®/elastic shock cord combination. Water-slide decals are included to complete the kit.

Construction begins with a fairly demanding fin assembly process. The upper and lower fins (each a set of 4) are two-piece construction, and must be carefully aligned and bonded flat. Personally, I enjoy the craftsmanship required by this approach and find it much more rewarding than the basic E2X plastic fin cans out there these days.

The motor mount assembly is built from a tube coupler and pair of centering rings. The Kevlar® is attached to one of the rings then the 18mm motor tube and engine hook are inserted inside and bonded in place. The tube coupler certainly adds strength although I would have "upgraded" this by using thick, wound centering rings and eliminated the coupler assembly altogether. 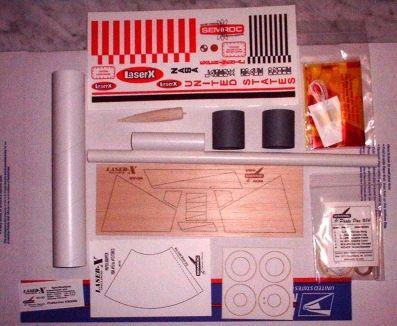 The process is repeated for another tube coupler for the transition. Once the assembly has dried, the transition shroud is cut, formed, and bonded to the coupler along with the upper body tube. The nose cone is then glued into place.

Next up is bonding of the fins--two sets of four, followed by 12 tiny fins that go along the bottom of the motor mount assembly, giving this a Mars Snooper-like appearance. The main fins are trimmed with four toothpicks, which look great but are destined to break off either on landing or in storage.

Recovery installation is straightforward using the standard attaching the chute to the Kevlar®/elastic combination.

Finishing:
Lots of balsa to sand and seal with this rocket--the standard paint scheme is also very challenging, with three colors and lots of masked areas, including fin edges. I would rate this a solid skill level 3 just for the aspects of the finishing. After painting, the water-slide decals are applied, and after following the standard scheme, I still had a few decals leftover. Oh well, they'll look good on my next scratch project

Flight:
First flight was on a modest B6-4, which was a good choice as it was surprisingly quick off the pad. Despite the fairly large fins, this little rocket screams.

There was a slight spin on the way up, but it followed a straight overall path and deployed right at the top. The chute didn't unfurl (I had 3 of those today, probably due to the freezing temps), but the rocket back-slid and landed gently in a bank of snow undamaged.

Recovery:
I'll blame luck and the weather on the recovery problem as I think the materials provided are fine.

Summary:
I love the retro/classic design and look forward to more of their products being offered in the months ahead.

I just completed the build of this great rocket from Semroc and completely agree with the reviews on it. However, I feel some items need to be addressed. The skill level should be one or two higher. This is a relatively small rocket with a bunch of small, thin balsa parts. Very challenging to put together! I feel that the main fins are way to thin. The 1/16" balsa is great for the upper fins but the use of this size balsa for the much larger lower fins allows for major misalignment problems when attaching them to the main body. You must be very careful that they remain perfectly straight as the glue sets up. Use a slow to medium setting glue. Also, you don't need to round the fin edges to start. The balsa is thin enough, that as you remove the sealer, if you use it, the edges will get rounded nicely as you go. I used 400 grit paper and still almost over sanded the fins! Otherwise, another great kit from Semroc. Thanks Carl!