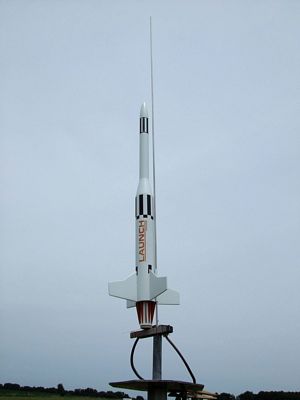 Brief:
When Launch Magazine when on a roughly 6-month "hiatus" towards the end of 2008, as a gesture of appreciation to their subscriber base they teamed up with Semroc to release a kit version of the rocket depicted within their magazine's logo. When the kit release was announced at NARCON 2009, all current subscribers of Launch Magazine got a free special edition of the kit. That's a pretty sweet present, retailing for just about the price of a year's subscription to the magazine.

Construction:
First a note for the collectors out there: there are three versions of this kit that I know of, differing only in the packaging. For magazine subscribers, there was a limited run of 300 kits, none numbered, each with header artwork depicting the rocket against a blue background, and no bag tag header card. When the regular commercial version of the kit was released, the first 100 were numbered per Semroc's typical procedure, and these shared the blue background artwork but also included the Semroc bag tage/header card. After the first 100 shipped, the standard edition of the kit features header art depicting the rocket against a yellow background.

OK, now on to the parts list, which is rather plentiful, supporting the $17.95 retail price for the kit:

Brief:
When Launch Magazine when on a roughly 6-month "hiatus" towards the end of 2008, as a gesture of appreciation to their subscriber base they teamed up with Semroc to release a kit version of the rocket depicted within their magazine's logo. When the kit release was announced at NARCON 2009, all current subscribers of Launch Magazine got a free special edition of the kit. That's a pretty sweet present, retailing for just about the price of a year's subscription to the magazine. 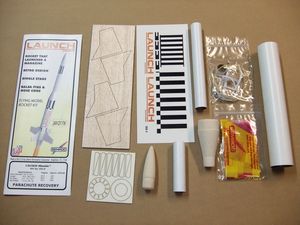 Semroc rates this a skill level 1, and while it looks a good bit more complex than the typical skill 1 kits, I think it's a fair overall assessment. In my case, I went with a slightly more challenging paint scheme that would bump it into 2 territory, but it's still a simple project that can be done in an hour or two plus finishing.

Construction consists of about 30 steps spanning 4 pages of nicely printed and illustrated instructions, the norm for Semroc.

The motor mount uses a pre-slotted body tube, metal hook (2.75" for 18mm motors), and a centering ring acting as a block. Additionally, the Kevlar® shock cord is anchored to the motor mount by slipping a loop under the forward bend of the metal hook, then securing it in place by sliding the forward centering ring over it. The aft centering ring is handled a bit differently--it sits 1-1/2" forward of the aft end. This is to allow room for the vanes, which have small tabs that slide into cutouts on the aft ring (see photo). In my case, I had decided in advance that I wanted to give the rings an accent color, so I held off attaching them so that I could paint them first. Yes, it's not as strong a glue joint (bonding to a painted surface), but these really don't get much stress at all and masking 12 of them would be a real pain. 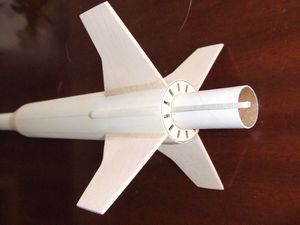 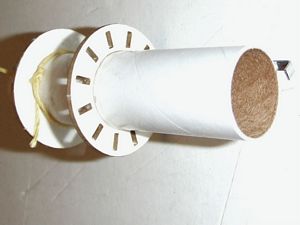 The payload section is pretty standard. The balsa transition is glued to one end of the body tube, and the nose cone is friction fit to the other (or glued if you don't want to use it as a payload model). I wound up drilling a 1/32" hole for eventually loading an altimeter. A screw eye goes in the transition for shock cord attachment, completing the basic construction.

Finishing:
Looking at the cover art, the finished rocket is plain white with decals. As mentioned, I wanted to accent the vanes a bit more, so after priming everything with two coats of Rustoleum gray primer (I'm slowly abandoning the newly reformulated Krylon...), shot 3 light coats of gloss white over everything. The vanes got a sort of orange-like color described as "pumpkin orange", but using just one coat, they picked up enough of the gray primer undercoat to look fairly close to the light orange coloring of the magazine's title decal.

The waterslide decals are excellent quality, easy to work with. One warning, though: this has 4 C-shaped decals that go around the leading edge of each fin. You'll need to make sure you cut out the inside of this C, which is a fairly small area (3/32" fin thickness). 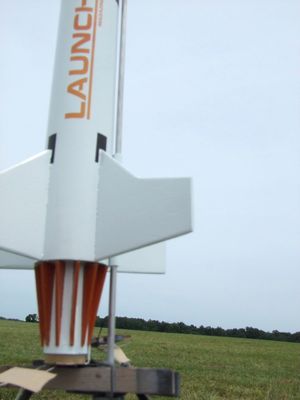 Flight:
For the first flight, I was only about 150 yards upwind of a dense grove of trees on a 3-5 mph wind day, so I went with a B6-4 motor rather than the max recommended C6-5. The flight was dead straight, not a trace of roll, and deployment was just a hair early--the rocket was less than a second shy of apogee.

Despite the fact that I was mainly flying a research model recording apogee with an altimeter most of the day, I stupidly forgot to put the altimeter in this "sport" model flight, although would estimate it hit about 300 feet on the B, which was well below the estimated 500 feet on the header card. However, my painted/with chute weight of 1.44 ounces is also heavier than the header card's 1.2 ounce estimate.

Recovery:
The 12" plastic chute deployed fine, and everything came down nicely on fairly tall grass. Not a trace of damage anywhere.

Summary:
I'd have to say "free for subscribers" is a pretty huge PRO for this model, although being a collector I stashed that one and built/flew the regular retail model. Additional pros would be the attractive styling features such as the vanes and transition. I also like the tie-in to one of the hobby's best publications.

One small CON would be the boring all-white paint scheme that dampens some of the visual appeal of the design, but that's easy enough to overcome.