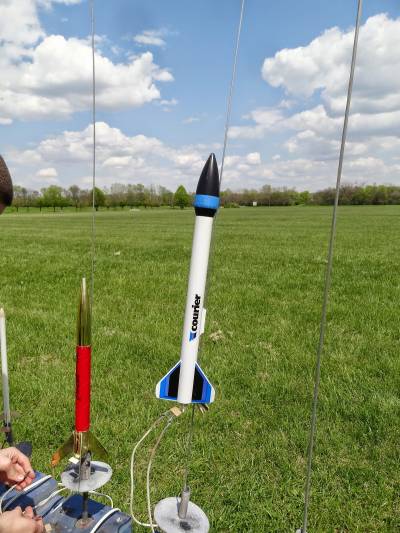 Picked up at Hobby Lobby during the Quest clearance "just because."   The Courier would become my first competition egglofter by default.  (It was the only one I had that met the single engine criteria.)  Despite a lack of enthusiasm for the project at first that wound up causing the construction time to be measured with a multi-year calendar, I must admit to a grudging respect for the Courier.  It does what it needs to do and doesn't require a boatload of smarts to get it to work right.  I'm living proof.

Having built several Quest kits in the past, I was familiar with what I found when I opened the kit.  If this was your first Quest kit, you'd likely balk at the way the centering rings feel.  They're paper, and feel like a step above typing paper.  Not confidence-inspiring by any measure, they still work.  My fin stock had a major warp that gave it a left to right whoop-de-do, but once the fins were punched out and allowed to sit under a stack of books for a few days, they worked fine.  Kevlar is a nice touch, but I subbed out the elastic for a longer piece of my own stash.

I followed my normal finishing regimen with the Courier, primer, thinned Fill & Finish, sanding, more primer.  It looked passable at this point, so the whole body was sprayed with two coats of gloss white and looked good enough to allow the stickers to adhere.  I left the black plastic nose cone as it was, figuring that since they suggested electrical tape as a method of securing the egg payload for flight, the paint might give way as the tape was pulled off. 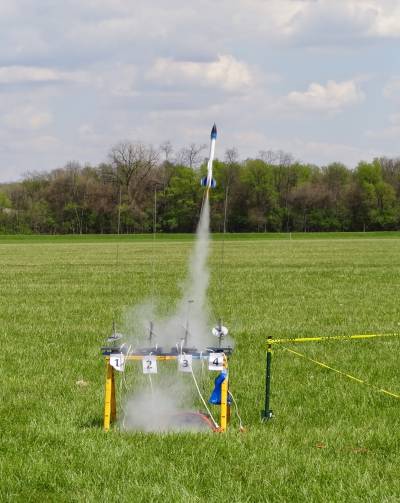 First flight was at B6-4 Field on a night when I took a bunch of unflown birds to the field.  The Courier flew in bare balsa, which was the theme of the night for most of the rockets that went to the field with me.  The B6-4 load was perfect for conditions that night.  The Courier arced back over my head toward the big trees on the hill to about 350'.  Ejection came as it tipped over and it recovered on the infield between first and second base.  I was impressed enough with the flight to move it up in the paint queue.

Flight #2 was again on B6-4 Field on a beautiful spring evening shattered by the loss of my Amraam to a tree.  The Courier, by now in full livery, again flew on a B6-4.  Flight was arrow straight to 350' on the calm night with a drift over toward the trees on recovery.

Third flight would be at eRockets Field in Dayton with the Wright Stuff Rocketeers at a competition where egg loft was a category.  I'd built a couple of purpose built competition birds the night before, Oscar the Grouch for the streamer and chute duration events and Big Slick for Super-Roc.  Oscar did fine.  Slick never flew.  No way I was going to build something else for C eggloft when I had the Courier ready and waiting.  Loaded with a C6-3, the Courier boosted the egg to 350' and successfully protected the egg despite stripping one of the shroud lines on the chute.  Egg #35 recovered without incident and I hope someone enjoyed it at breakfast the next day.

Pros: Excellent choice for a first egglofter.  Won't compete with the specially built birds, but a good step toward working with them.

Cons: None.  An all around likeable bird. 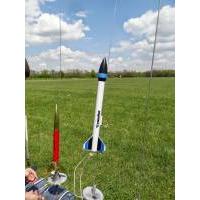 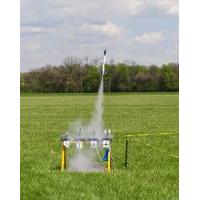